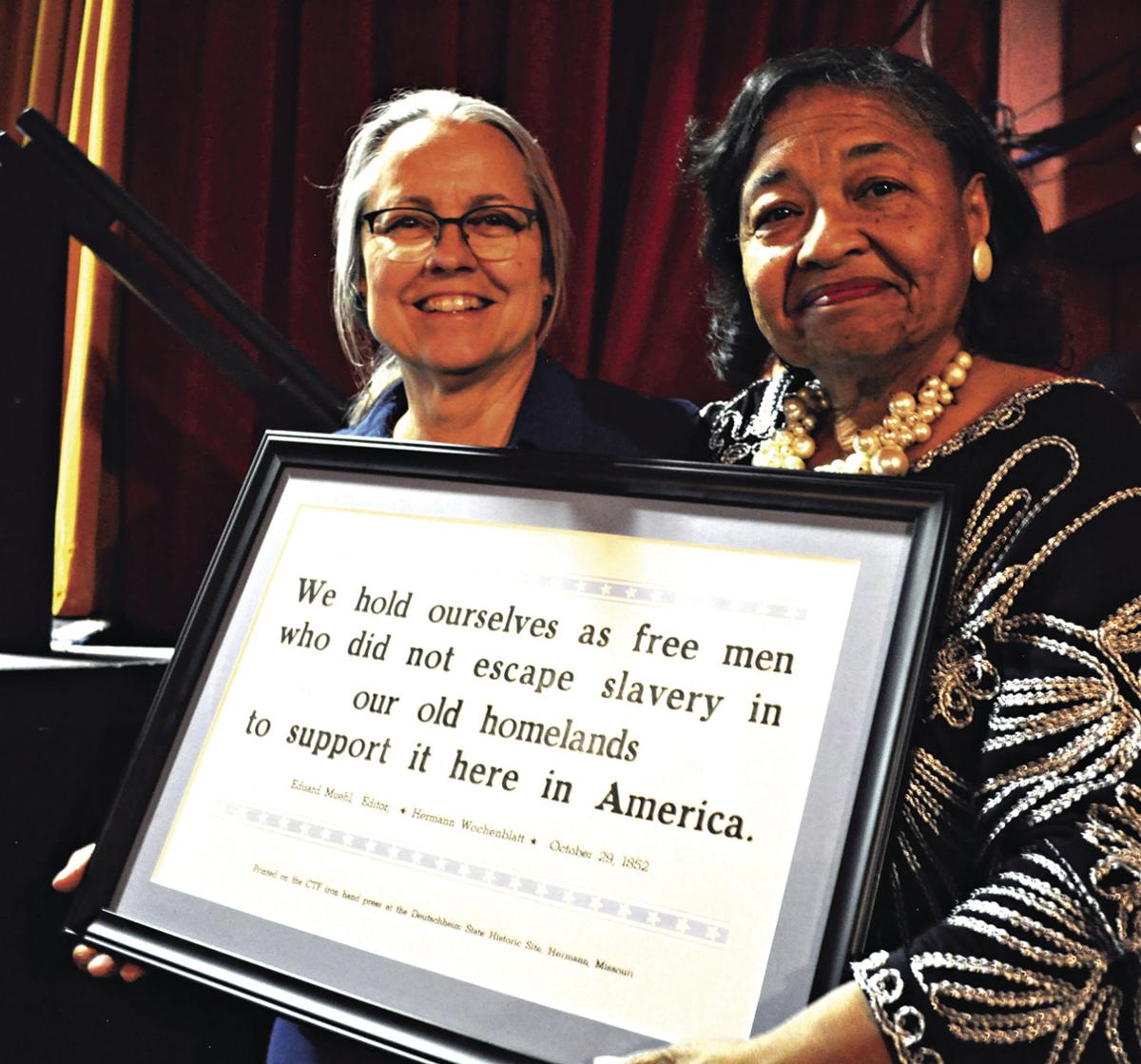 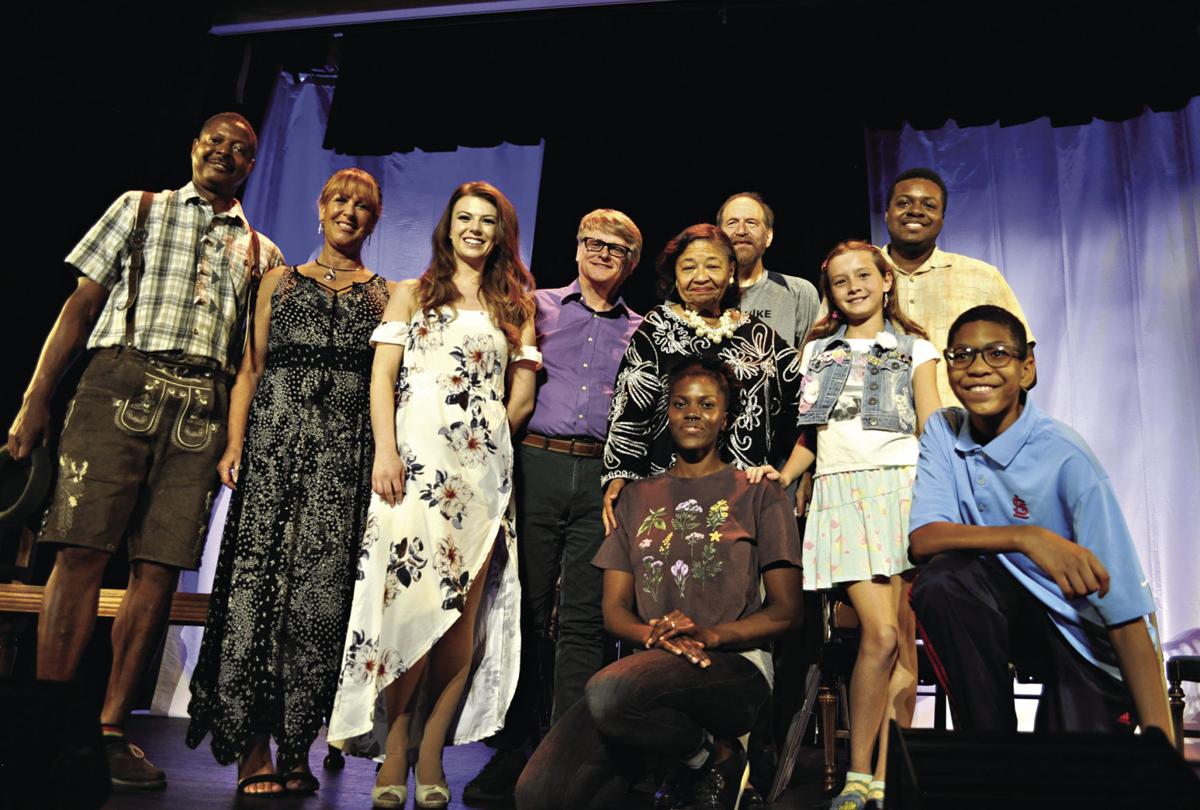 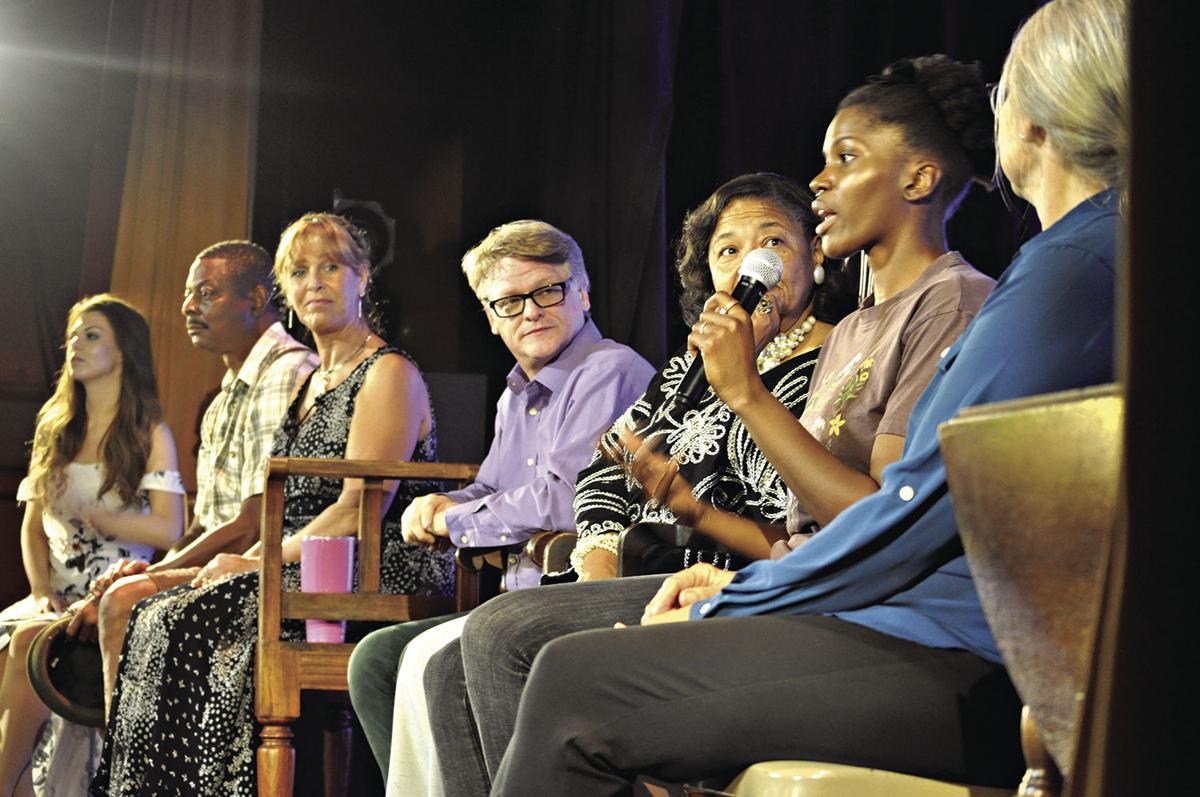 We accept many different kinds of announcements. Just click on the button below and submit a form.

It really was an amazing story, this theatrical production, about German abolitionists in Missouri, that debuted at the Showboat for a Saturday matinee. Playwright Cecilia Nadal, founder of Gitana Productions, the company that produced the play, wrote not only an entertaining fictional account based on facts, but pulled at the heart strings of the audience as the questioned existence of slavery in Missouri was poked and prodded like the slaves themselves.

Nadal took a complex subject and humanized the tortured topic to peer deeply into the monied-motives of slaveholders, the earnest resolve of German immigrants to make this a better country than the one they were leaving and the central theme of compassion and empathy for humanity, both black and white—not separately as skin color identifies one from the other, but to recognize that point in time when in conversation or a shared experience, two human beings discover the heart of the other. It may have taken every ounce of acting skill each actor brought to the Showboat stage, but the cast of An Amazing Story: German Abolitionists of Missouri, helped us discover our hearts and our souls as we time-traveled back to the Missouri River bottoms in the 1850s.

Actor James Turner captured the audience immediately as the lights went down and he strolled through the audience to the stage, singing the old spiritual, “Oh, Freedom,” with his rich baritone voice.

And before I'd be a slave. I'll be buried in my grave.

And go home to my Lord and be free.

Following Turner, another actor (Garrett Bergfeld), traipsed towards the stage, bellowing about the fruits of this new land, for a new Germany, one that reminds him of the Rhine River in the old country, but one where farmers are free to buy land to prosper. I was so enthralled with the performance, that I just assumed he was portraying Gottried Duden, the traveler/writer that penned “Report on a Journey to the Western States of North America.”

“My fellow Germans—there is room for millions of fine German farms and vineyards along the Missouri River,” he said with a twinkle in his eye, pausing, eliciting a smile that reminded me of comedian Robin Williams, when he was not in a comic routine, but busy touching a soul with kind words. “And it is there that we can build our paradise.”

Then he shifted gears to expose the strife back in Germany.

“You know what happens very well when proud and hard-working people are held back—stopped from adequately feeding and providing for their families!” he exclaimed, voice rising. “This existence was a slow death of the soul. Imagine living a life in which there is more war than peace!”

The stage is literally set for escaping German immigrants that want to live in a land where they can be free from oppressive governments and violence, yet are shocked to discover the legality of slavery in Missouri, their Promised Land.

We learn that the singer, Abraham Shaw, was a freed slave (played by James) and we have the introduction of a young husband and wife, German immigrants that befriend Abraham. Young Friedrich Kunkel (played by Ross Rubright) is a journalist looking for a job and his wife Marie Kunkel (played by Elizabeth Dunn) have just arrived by steamboat when they witness a young slave being beaten in the street. This was presented effectively as shadows behind screens illuminated with red light. Horrified by what they had just witnessed, they are then set upon by a local (played by Greg Matzker) that finds “the Dutchies” and their prohibitionist beliefs repugnant—and he doesn’t spare the use of “the n-word.” Sensing the young couple is being harassed, Abraham picks up their luggage and pretends that he is the slave, whose task it is to “fetch them” and go to the Tivoli Inn. Thwarted from his ploy to harass the new immigrants he moves on. Abraham says he works for a German newspaper publisher, Arnold Mueller. Friedrich Kunkel asks for an introduction to Mr. Mueller looking for a job as a writer. Actors Dunn and Rubright portrayed the Kunkels, the young immigrants well, with believable accents and just the right amount of kindness and naivety a young couple coming to America for the first time might possess.

Actor Garret Bergfeld came out of retirement to be in this production playing both Gottried Duden and abolitionist newspaper publisher Herr Mueller.

“I’d do anything for [playwright] Cecilia,” he said.

He said at age 69, it is getting more difficult to learn the lines. Yet, in this production—not a falter one. Every move, every tilt of head position, foot placement and pause was done for effect, with purpose, with the skill of a master and it was a pleasure to witness such a performance, as his. He said actor Peter O’Toole was an inspiration.

For this afternoon, Herr Arnold Mueller came to life taking on the Missouri legislature and citizenry with his printing press, with urgency, the message to abolish slavery, spreading to anyone who could read.

His German wife, Angelika Mueller was played by Sylvia Flex, who arrived in this country in 1989 from Germany. She played a wonderful supporting role, with the European English accent, a natural.

Playwright Nadal had to address the crux of abolitionist Mueller owning a slave—Darku—played by Clifton Flex,  and how this stinging hypocrisy was justified, and later rectified. Actor Flex also speaks fluent German and showed his skills by reading a copy of the German newspaper, so the Mueller’s adopted daughter Lydia (played by Actor Lydia Foss) could learn and comprehend her second language.

To complicate matters further, a friend of Herr Mueller, Henry (Heinrich) Reynolds (played by Matzker) was a German ashamed of his German heritage, selling his soul to commiserate with businessmen slave holders.

In a sub-plot, slave Kamilah (portrayed by Actor Janelle Grace Johnson) lost her children as they were sold to another slave owner in southeast Mo. Reynolds redeems himself by contacting the slave owner (a debtor of his) and forgives the debt for Kamilah and the children so they can reunite, along with Lydia, their playmate. Lydia also plays a large part in changing the heart of Herr Reynolds with her direct and simple way of looking at slavery through the pureness of a child and through the heart’s call of just doing the right thing, and Reynolds, to his credit, faces his uncomfortable demons.

Several theatrical tricks were used to great effect in the production. History of the period was quickly presented as Extra! Extras!, the paperboy’s chant, in the form of shouted headlines, under a veil of red lighting. Brilliant!

During a church service led by freedman Abraham Shaw, the audience served as the congregation. It was another way to draw in the audience, putting us “there.”

Playwright Nadal peppered the audience with questions, whose answers looked for a place to hide. When Henry Reynolds, Mueller’s friend, wants Mueller to re-evaluate his stand on slavery, he encourages him to wait and let things in Missouri get sorted out among the politicians and the business owners. “Just wait,” at which Herr Mueller retorted “How long will it take to get things right, if money is the motive?” he reasons, calling him out.

“What is America if it has a stone heart of deception!” slave Kamilah thundered.

The scenes moved quickly. Spiritual humming from the actors supported important reasoning from the impassioned actors, pleading with the audience for understanding.

As for the technical side, the lighting was sparse, but used effectively for outdoor and indoor settings at all times of the day and night. Nighttime was cast as leafy shadows in backlit moonlight. The props were basically an antique bench, a table and five chairs. The bench did double duty as a carriage seat as actors physically bounced up and down simulating rough roads, delivering their lines in an easy conversational banter. Tim Poertner handled the lights, audio and set design. His grasp of the technical aspects and the story left us wanting nothing more—he made it look easy. The only criticism is some of the younger actors lines were lost at times, but was more of a function of those young voices learning to project.

I was exhausted by the play’s end and emotionally wrung out. We speak or hear of racial issues everyday, but seldom is the issue of slavery brought to light in the dark corners where we keep that part of our history in a personal box, along with experiences of divorce, loss, or any association labeled “pain.”

Playwright Nadal said before the play, “My hope as you watch this play, is that you will admire these incredible men and women, both African-American and German and that there is something that will touch you, for us to go to that higher level of fighting for a democracy which is as it should be.”

Offer a personal message of congratulations...

You'll find individual Guest Books on the page with each announcement. By sharing a positive thought you add happiness to the lives of those who are reaching a new life milestone. If you have an existing account with this site, you may log in with that below. Otherwise, you can create an account by clicking on the Log in button below, and then register to create your account.

Will you travel this summer?