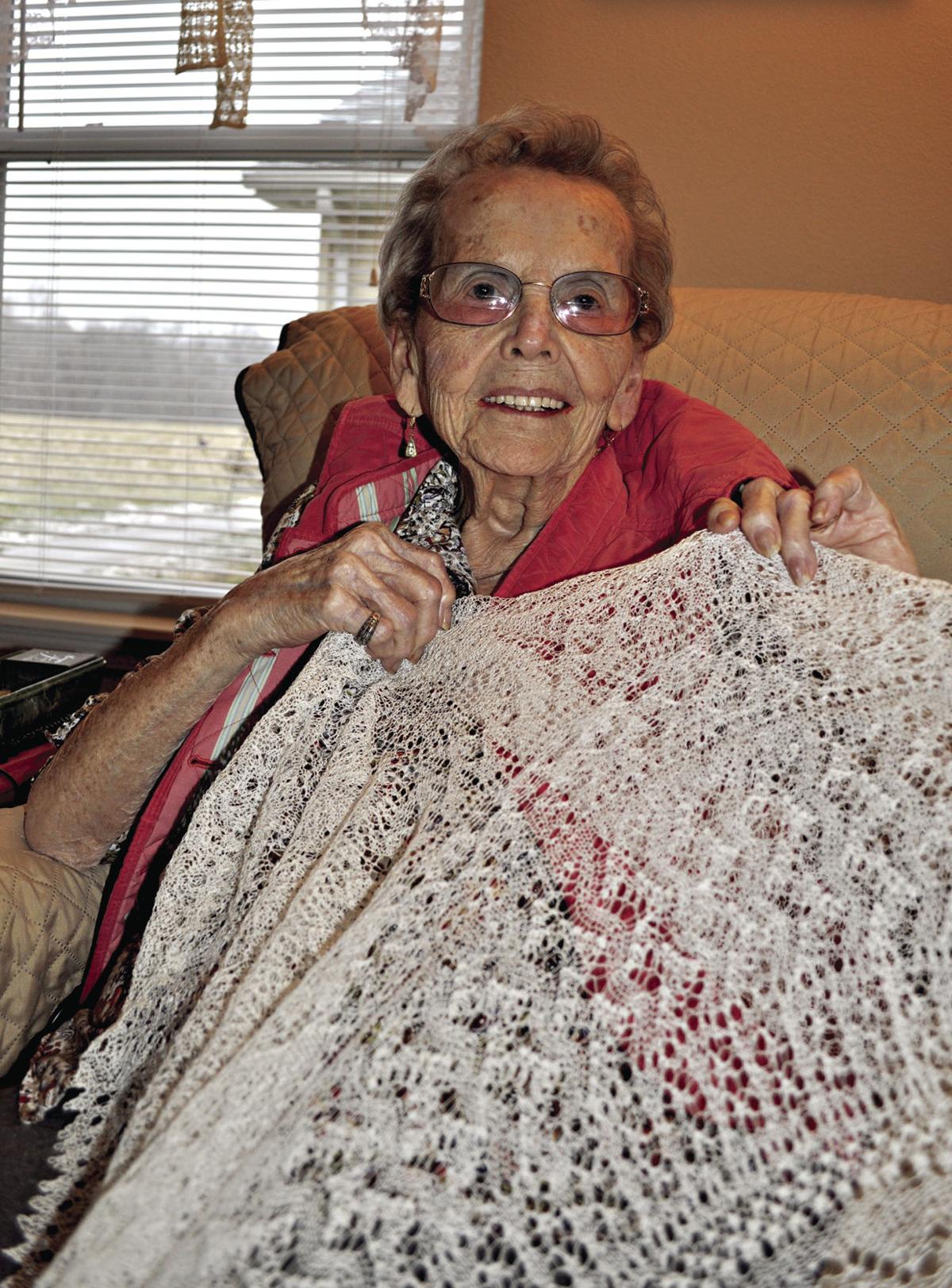 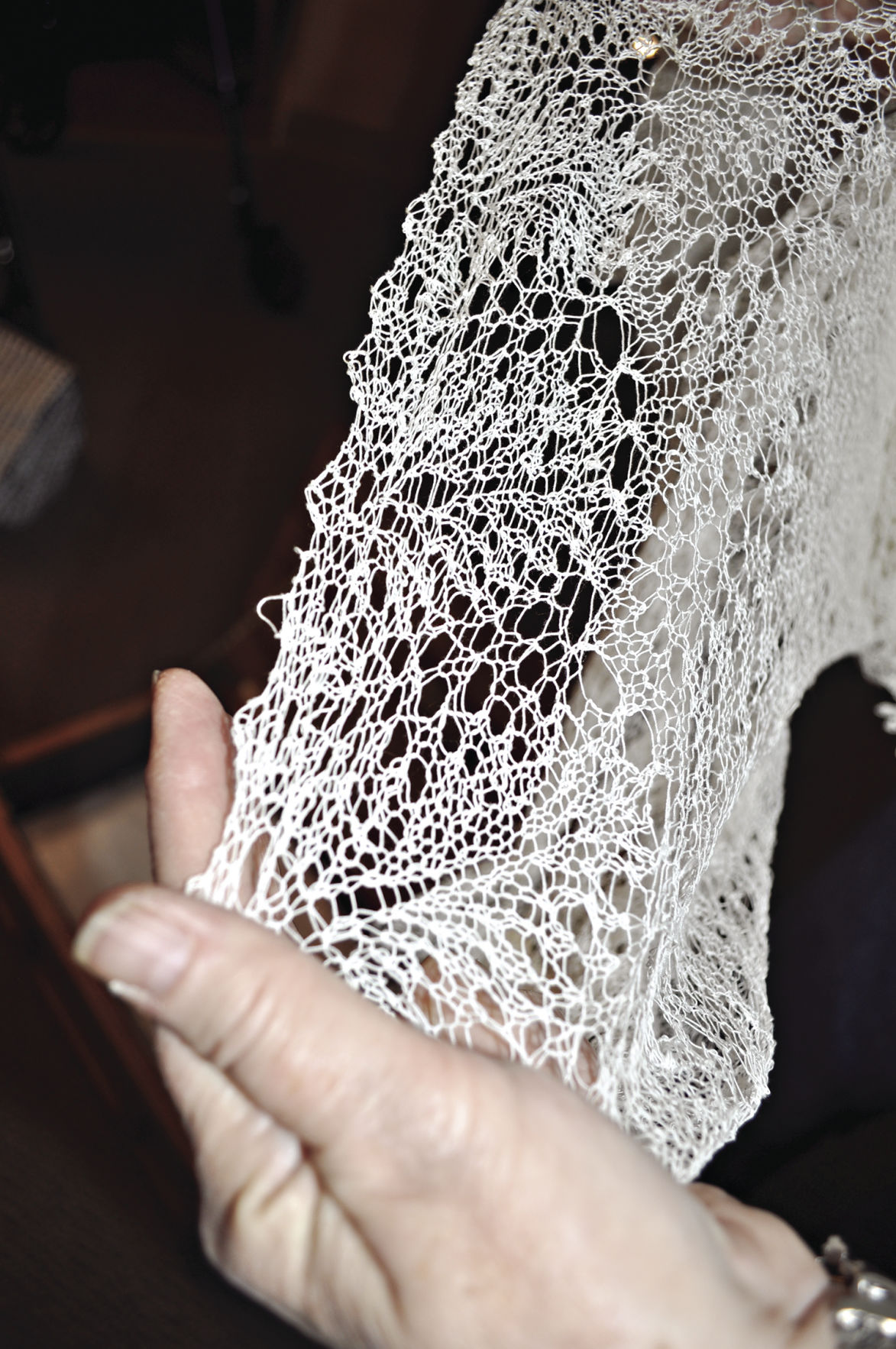 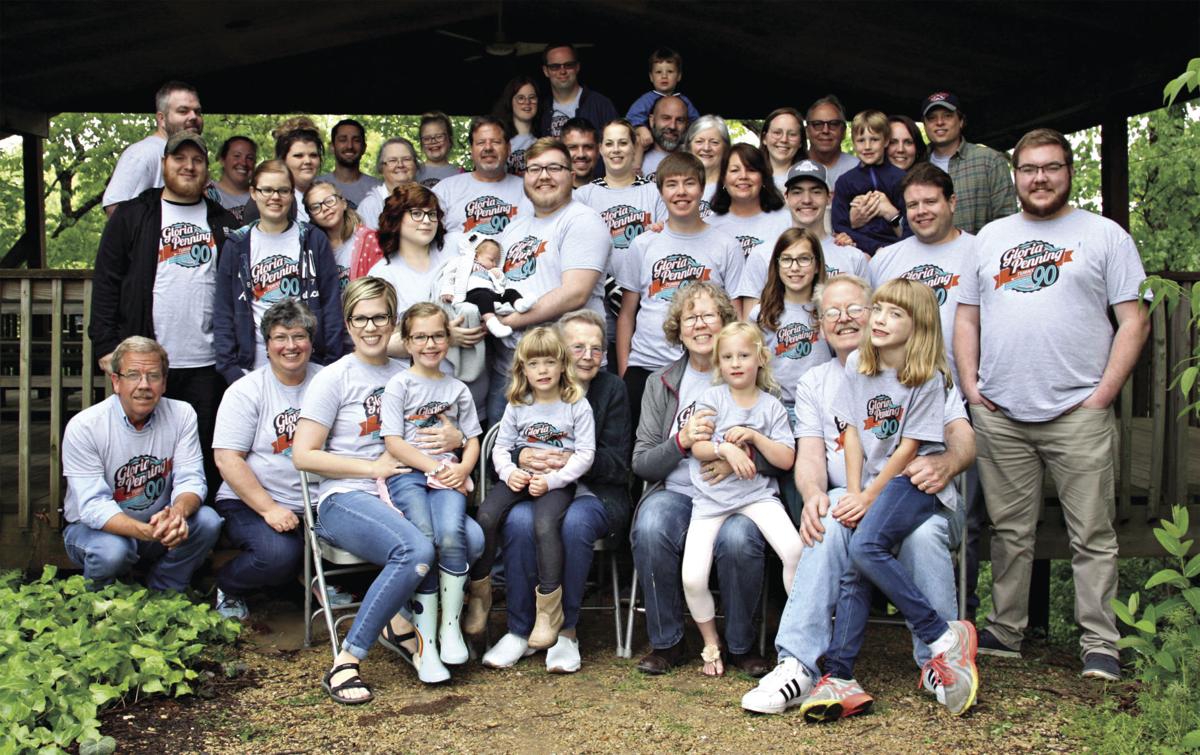 Editor’s note: I first met Gloria Penning at her home on 4th Street in Oct. 2018. I was doing one of those hometown feature stories small-town newspaper editors sometimes write, and I found her absolutely delightful. Pushing 90 years of age, she was spry, with a sharp mental acuity and a great sense of humor. Recently, Gloria has moved on to a different phase in her life, giving up her home for an assisted living residence at Victorian Place. Gloria’s daughter, Linda, recently retired from the nursing profession in Columbia and has been helping her mother here in Hermann, staying at the home place. She was present on the day this interview took place.

Gloria greeted me with a big smile and a hug because she’s that type of person. She engages your presence completely. Though the television was on, she’d rather be watching the downy woodpeckers at her bird feeders outside. Inside, she had some beautiful blue parakeets in a cage that were singing away.

She wanted me to see the wedding veil that is quickly becoming a family heirloom in the Penning family, because three granddaughters Elizabeth (Bizzy), Julia and Leslie have worn it in their respective weddings. The story about the veil’s origin was recently written up in the Lacy Knitters Guild (LKG), a 2,000-plus member club that promotes the craft of lace knitting. Gloria was member #15. In the member’s newsletter, Gloria says she learned the art of knitting from her mother in a Girl Scout group during WWII. Modified coat hangers took the place of metal knitting needles, since most metals were rationed during the war effort.

“We made dishcloths in garter stitch and thought we were really accomplished!” she told the LKG reporter.

She spoke of a friend in the club named Gracie, who “inspired me to do bigger and better things, like creating a beautiful legacy piece.

“I knew that doing a doily isn’t something the whole family can be proud of, but what about a wedding veil, to live on generations after I’m gone?”

She said there was no veil pattern, but that only challenged her to start the center with a favorite doily pattern.

“I followed that with row after row of my favorite lace knitting patterns, and about five years later, I was finished!”

She explained the overall shape of the veil is a circle (87 in. in diameter), starting from eight stitches in the middle.

The formula for increasing the pattern was from a Swedish woman living in Wisc., by the name of Elizabeth Zimmerman.

“I was making a wedding veil or the world’s largest laundry sack—one or the other—because I didn’t know if the formula would work,” she says. She asked herself, “Do I want to “cast off” and see if this is working?”

Fretting, she said to heck with it—she would just finish it and “lo and behold, it just laid out flat as a pancake.”

Gloria didn’t say, but one could surmise that her consistent stitching paved the way for success. She says it’s all sticks and strings, no matter the size needle or the size of the thread—the stitch remains the same.

“She (Zimmerman) wrote “Knitting Without Tears,” so if you screw up, do the same thing on the other side and people will think you meant to do that,” she shared, jokingly.

Daughter Linda said her mother also used stitching markers, showing the knitter if they are close to 30 stitches, for instance, to stay on count.

She tells a story to the LKG reporter that tested her while the veil was being sewn.

“While I was still using four needles on the veil, very early in its inception, my little granddaughter of four was spending the morning with me and she came to the kitchen with one of those four needles, handing it to me like a gift. I just burst into tears. She also began to cry and we rocked and cried for a while. I assured her everything was OK, and she bounced away. An hour or so later, her little cousin came to play and she told her cousin very seriously, ‘Don’t touch Grandma’s knitting . . . it makes her sad.’”

Slyly, but testing Gloria’s humor meter on this snowy afternoon, this reporter asked Gloria what mastering lace knitting details says about her personality?

“Are you a perfectionist?” was the question.

“Oh, you know it!” she answered. “I wrote the book on that,” she says, laughing.

“I wanted to leave something lasting and just thought I’d make a little short one. No, I thought, ‘Let’s just go for it and it turned out to be the most intricate and beautiful thing I’ve ever created with my hands.’”

One of her sons, Daniel, made an oak chest for the legacy and it has a brass plate affixed to it with the names and pictures of each of the brides who’ve worn the veil.

Granddaughter number four, Rhiannon, is next in line to wear it in her wedding.

For the record, Gloria wanted to tell me the veil was knitted with a #2 needle with #20 crochet cotton (Coats and Clark). She says the most common question she gets concerning the veil, is ‘How long did it take you to do that?’

“If I put it all in one time frame, probably six months of knitting,” she answers.

Linda said she worked on it for around four years.

“The last two years, it was every spare moment I had—I wanted to finish it,” she said.

She has a quilt in her frame at home now that needs to be completed.

“I’ll get the gals together one of these days and say, ‘Come and get me Tuesday and let’s go quilt.’” “Maybe we’ll get it finished.”

Gloria was referring to the St. Elizabeth Sewing Circle made up of St. George church members. She said the sewing circle was started by Kathy Baumstark and she speaks highly of Kathy and the rest of her quilting members.

She has been tying up loose ends the past couple of years, rounding up all the quilt tops she has made through the years, getting them quilted. Linda said there were 18 of them.

Gloria takes this industrious can-do, get-it-done attitude in stride. She is, after all, a Hermannite, but what does that mean to her?

“You try to make your world as good as you can, because there’s so many perfectionists and the old German-Dutchy way of bringing up your children with discipline [set a standard]. “I’m not embarrassed about any of my grandchildren—they can sit down among people and visit and talk—they’re comfortable. There’s this pride, I guess—an appreciation of your life.”

This spitfire 90 year-old said she wants to go out of this life the way she came in—with a clear mind that is an open book, waiting to see what’s around the next corner, always expecting the best and not holding one grudge against a neighbor.

“I don’t know how much luckier I could get,” she shared. “I’ve had a fabulous life—it’s as rich as they come.”

Gloria has adapted well to Victorian Place, which tells me more about the person she is, experiencing one of life’s most difficult transitions, because she knows it is the end of the line. She knows she can’t really go home again to stay. But so many good memories overshadow her hard, cold ones, because she chooses for it to be that way, and her gratitude is overflowing—it’s obvious she dearly loves her family.

“I’m in heaven here, John,” she told me, studying her bird feeders. “I’ve never been so close to birds. I can see the flecks in their eyes. It’s really a thrill to be able to see them.”

I think Gloria will be just fine. And it has been one of my life’s blessings just getting to know her.