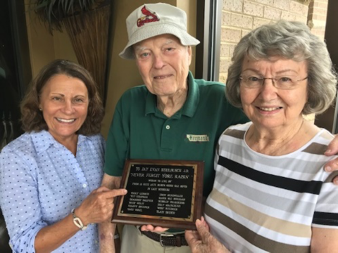 I grew up in Hermann but have resided in Knoxville, Tennessee for the last 20 years. Fortunately a few other displaced Hermannites are also scattered about this area.  Among those are our good friends

Byron and Betty (Schwentker) Kohlbusch.  Our families have been close friends for years.  We get together now and then for lunch to talk about our parents, our high school teachers, the fun Byron had playing trombone with the Hungry Five during the summers when he was home from college and some of the colorful characters we knew in Hermann.  At times, I sense Byron has been “home sick” since he left Hermann over 65+ years ago!

Byron and Betty graduated from Hermann High in 1950 and 1951. Byron’s parent’s, Ben and Lizzie Kohlbusch, ran a grocery store called Ben’s Tom Boy Store located just across the street from Berlener Rexall Drug.  When Ben retired, he sold the store and then worked part time at the Sharp Corner Tavern.   Ben was working there when my father, Herbert Mueller, purchased the tavern.  Although that was a long time ago, I’m sure some of you reading this article might remember Ben and Herbie.  Anyway, Byron’s career eventually settled them in Knoxville in 1967 where they raised their two sons.

Like I said, when we get together we share stories about growing up in Hermann and talk about the current news and events we’ve been reading in the A-C over the last year.  It is refreshing to see the wide variety of articles being published in the A-C.  It was the recent article about “nick names” that prompted our latest lunch get-together. Byron was so excited to tell us about his memory of these colorful names from Hermann and how they were shared far beyond our hometown.   I thought it was such a coincidence about the nick names and his story that I wanted to share it with my hometown readers.  Here was our lunchtime discussion about nick names and the 12 Gute Alte Buben (Good Ole Boys)

To set the stage, you need to know that East Tennessee is not East/Central Missouri so most residents hailed from Anglo-Saxon/Scots Irish background with basic common last names like Smith and Adams.  The German last name of Kohlbusch was most unusual.  When their sons, Todd and Jay, were in middle and high school, the Kohlbusch driveway was the site of constant pick-up basketball games between them and their buddies.  After the local kids joked around dissecting the name Kohlbusch, Byron started to entertain them with some of the other Hermann German last names he knew along with the endeared nicknames of such men as “Panky” Scharnhorst and ”Holy” Mausehund  etc.   It got to the point that whenever the boys arrived to shoot baskets, they would say, “Hey Mr. K have you thought of any more of those great hometown names???”   Byron would toss out another like “Bubbles” Volkerding.  The boys really got a kick out of that name and it turned out to be one of their favorites!  When he sees his son’s buddies today who are grown men, they still recall with fondness laughing about those unusual German names and those nick names!

When Byron and Betty’s son Jay graduated with his law degree from the University of Tennessee in 1985, Byron made a plaque for him.  I mean, after paying for the education, the least you can do is give the kid a plaque!  What an unusual gift it turned out to be.  Of course, the message had to be meaningful but humorous.  Byron minored in German in college and being of proud German descent,

it had to have a little German flare in it as well as a touch of East Tennessee.  The engraved plaque conveys all of this and is displayed today in his son’s law office in Knoxville.

Who would have thought these Hermann nick names would end up displayed in Knoxville!  We all have hometown memories but after enjoying the series about the Hermann nick names, this story was too good not to share.  Byron is 87 and Betty is 86 and they love to reminisce about their Hermann.     Whenever we part company, Byron’s farewell words are blieb wohl which translated means stay well.

So blieb wohl to all you faithful A-C readers from the Hermannites in Knoxville, Tennessee.

Betty Nicholls (Mueller) submitted this article.  A graduate of Hermann High in 1969, she is the sister of Steve Mueller and daughter of the now deceased Herbert and Evelyn Mueller. She and husband Eric have been living in Knoxville, Tennessee since 1999.