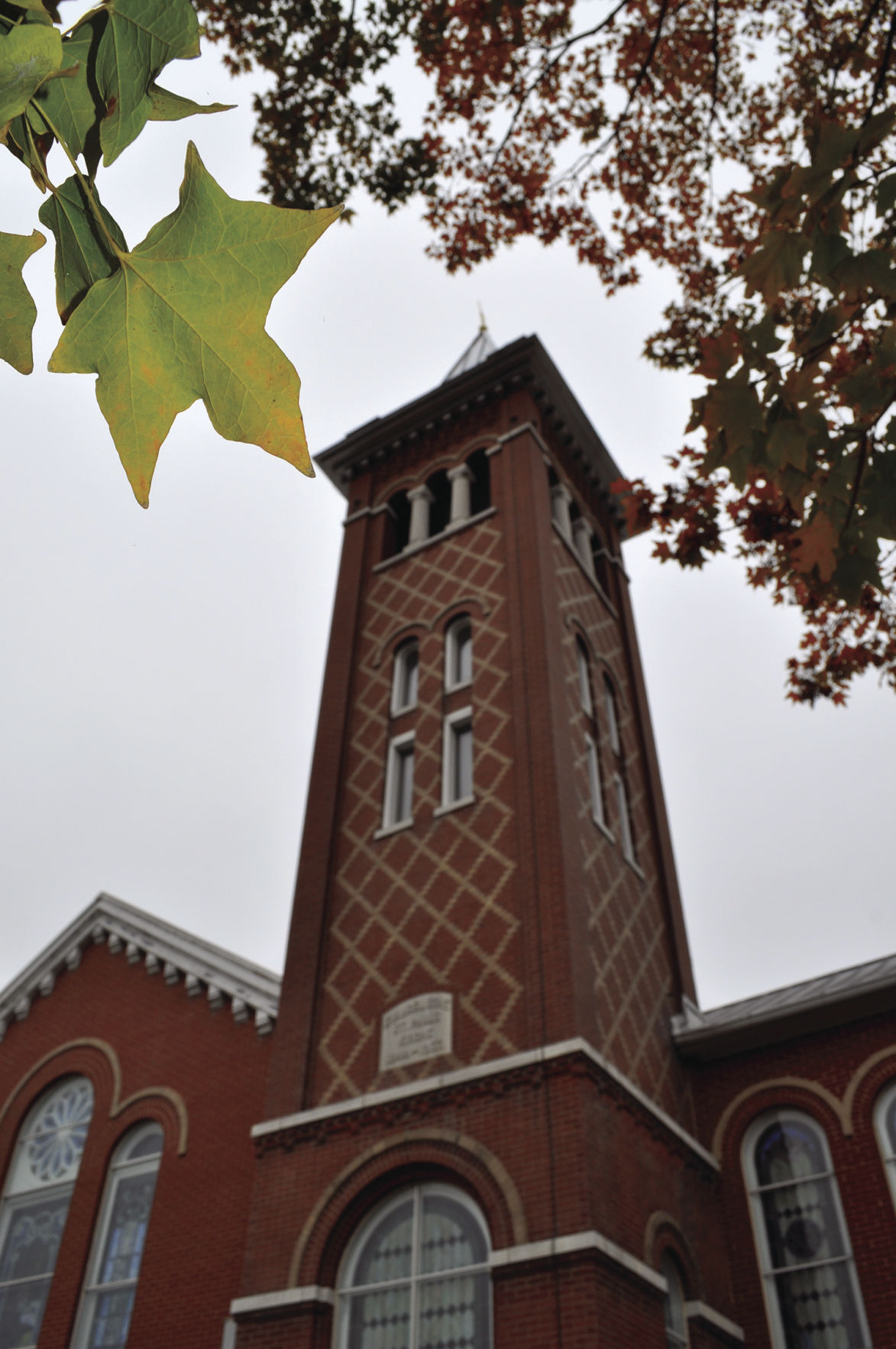 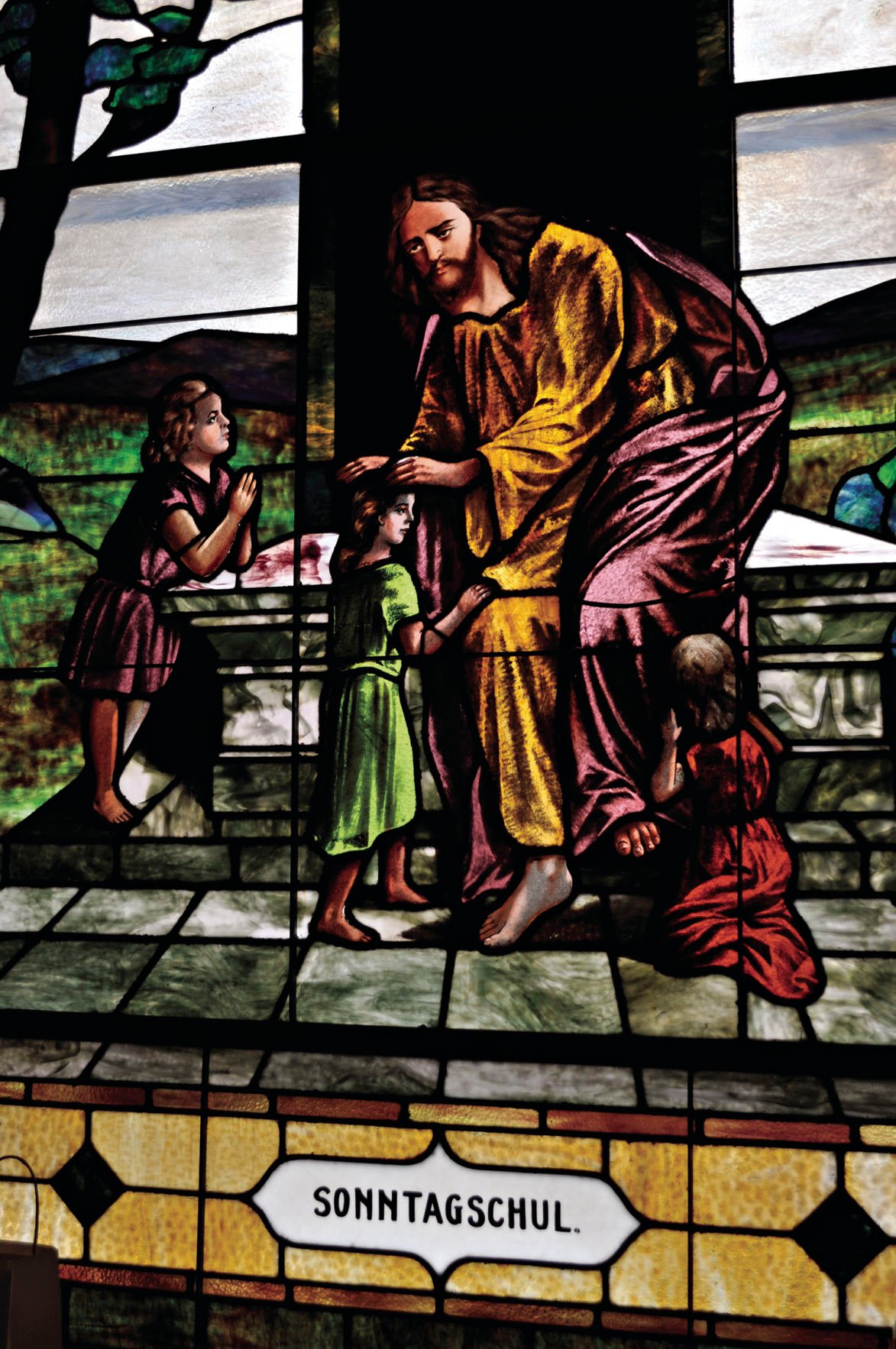 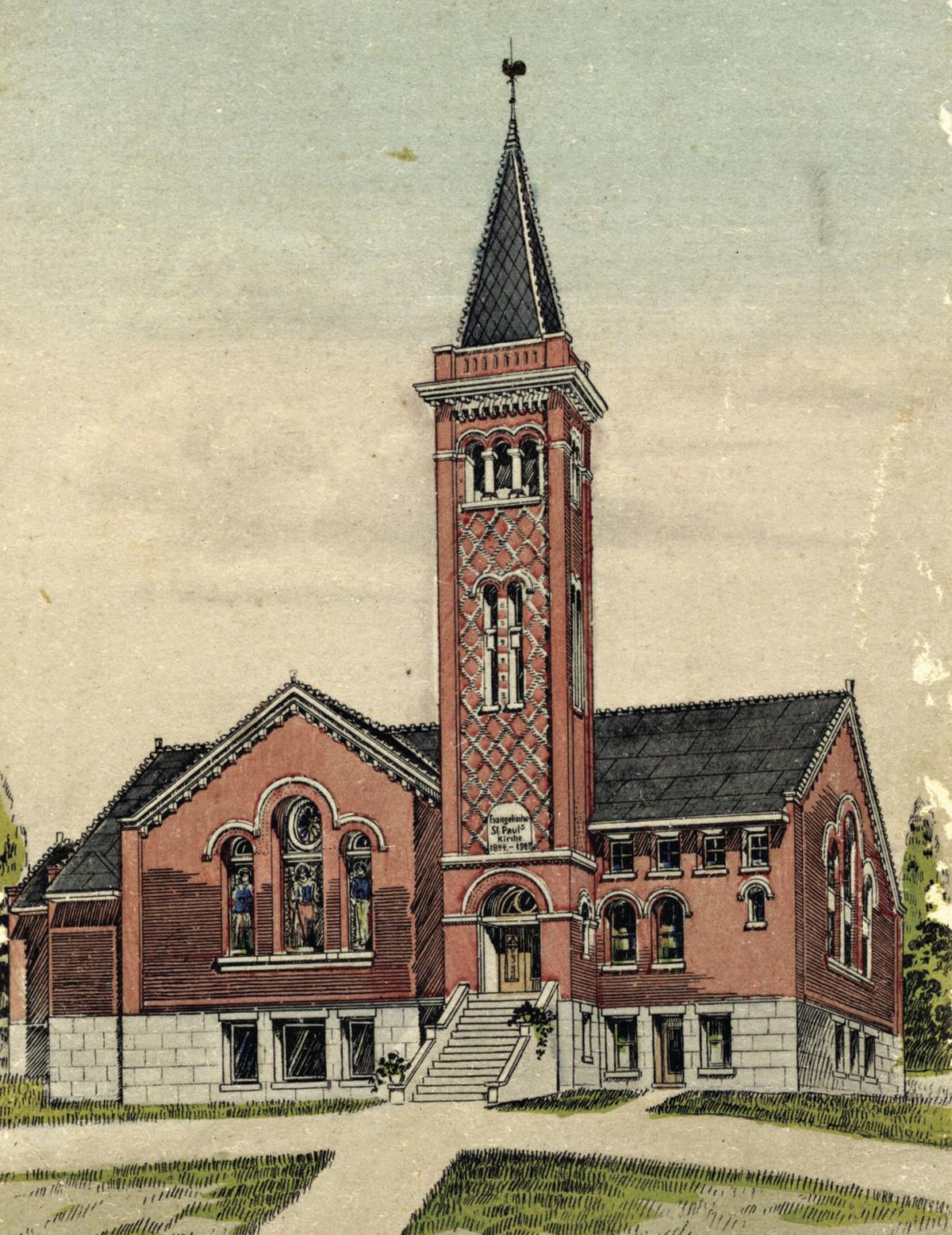 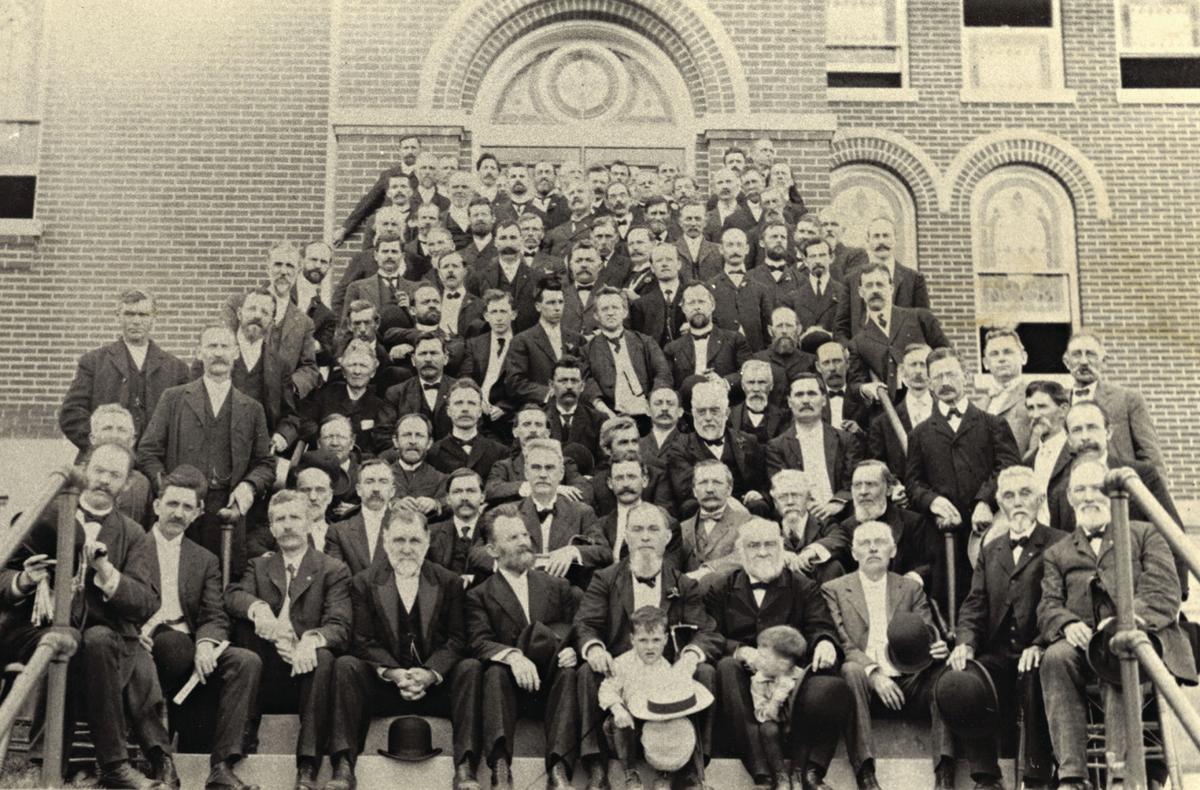 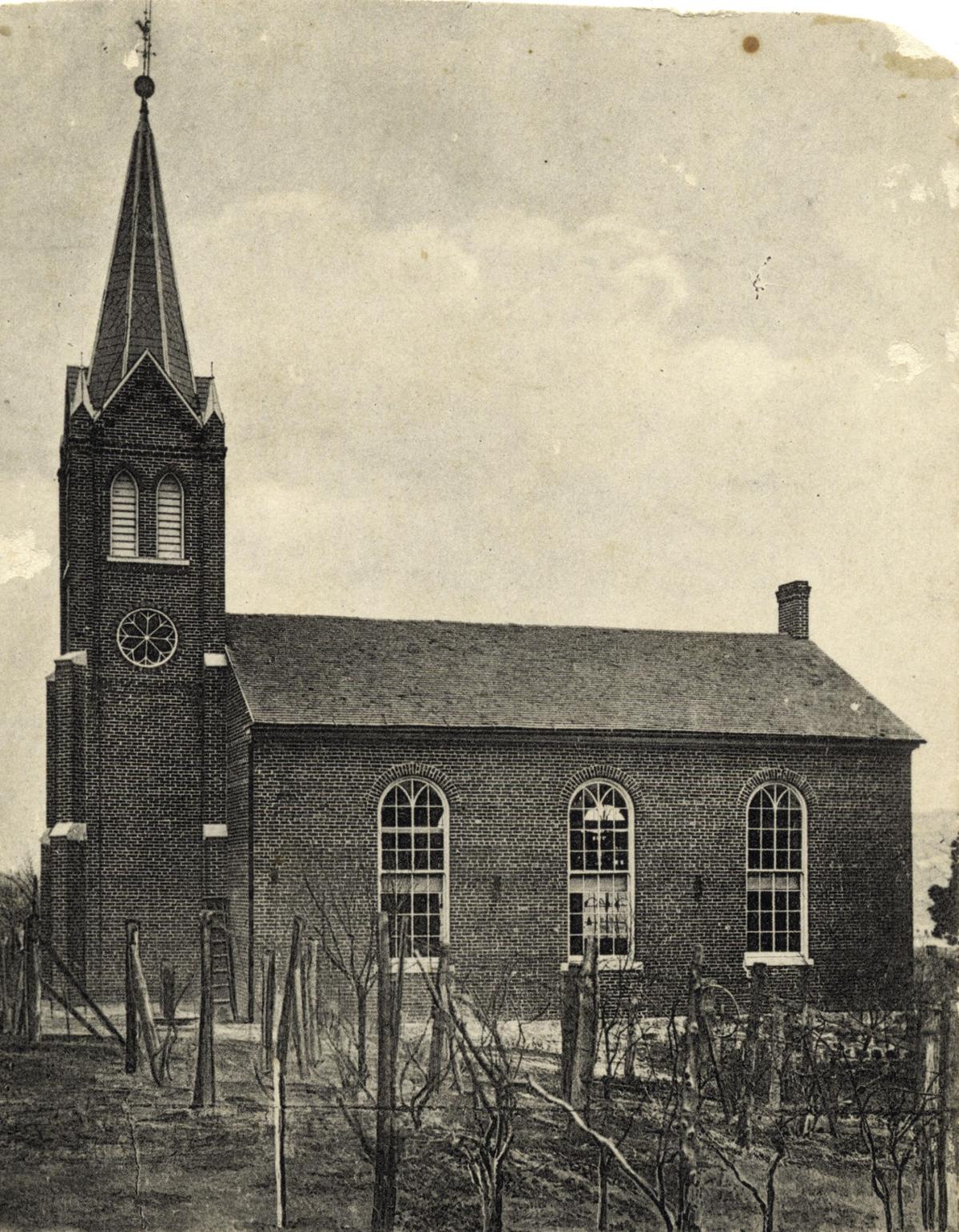 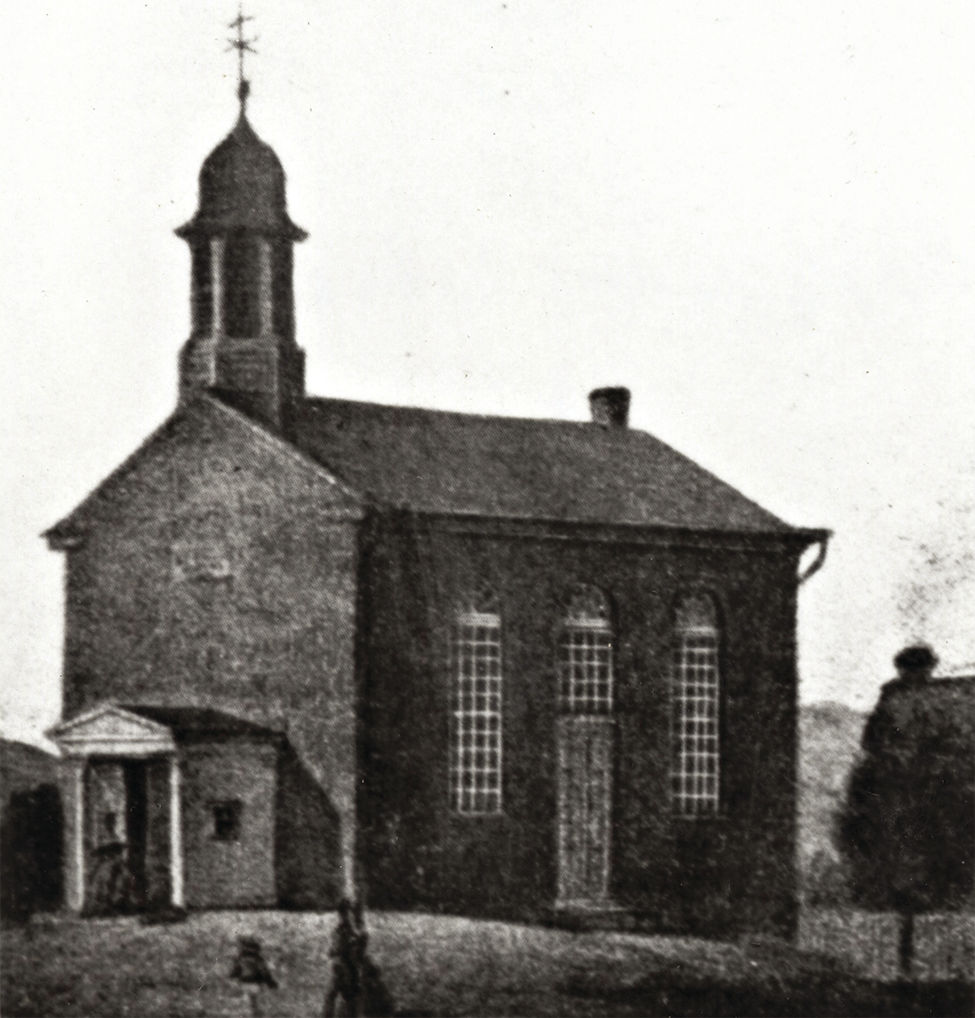 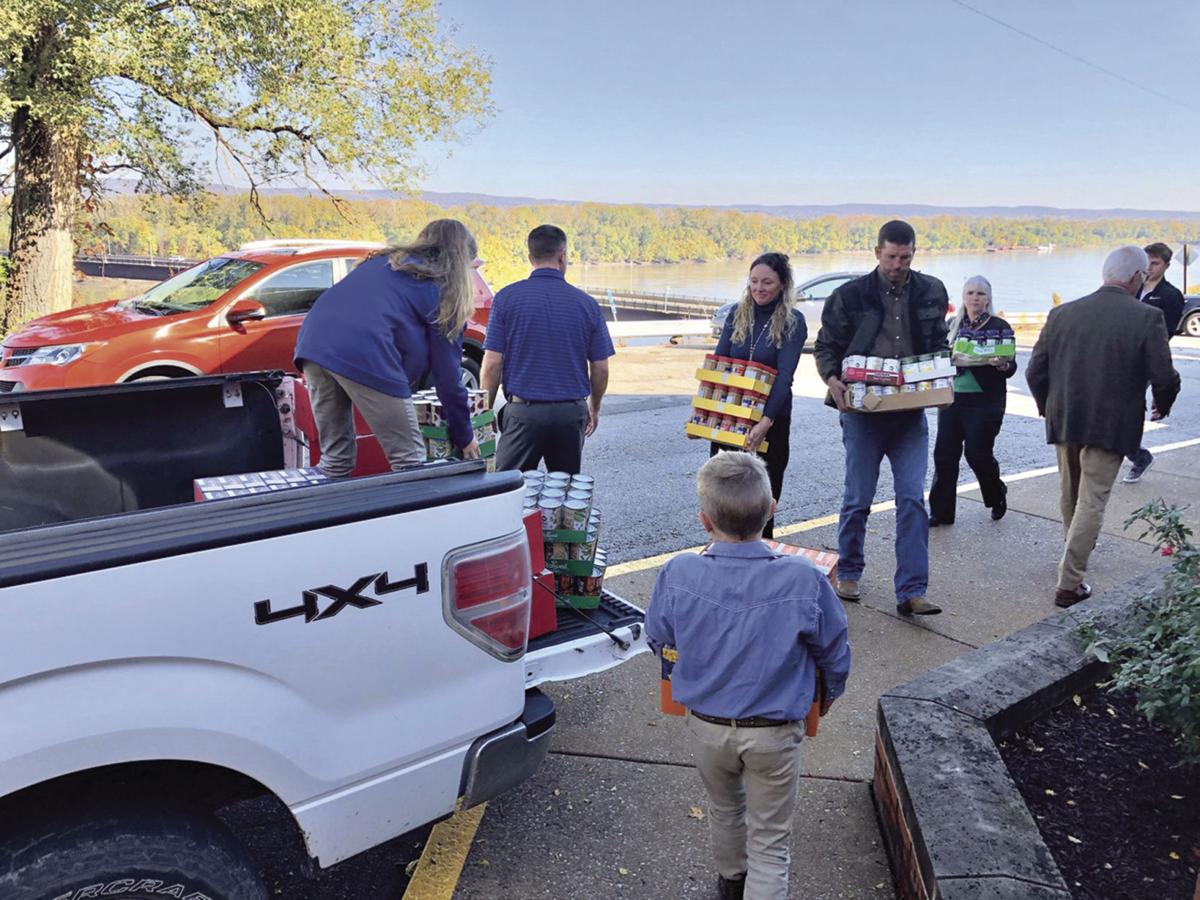 When Hermann visitors drive down Hwy. 19 from the north and cross the Christopher “Kit” Bond bridge, the first thing they might see are the gold domes of the Gasconade County Courthouse, gleaming in the sunlight. The second building that catches the attention is the tall steeple of the St. Paul United Church of Christ, up on the hill, overlooking the river. The church will be celebrating its 175 year anniversary during the month of Nov., since Nov. 1844 is considered the birthday of the congregation.

According to St. Paul Church members Susan Nichols and Lois Kruse, the two women on St. Paul’s history committee, there were already two Protestant congregations in the Hermann area—the General German Church and the Evangelical Congregation of Hermann and Surrounding Territory, before 1844.

At some point they combined into one and in 1844, a building was constructed and a church constitution was written and signed by 50 men from Lutheran, German Reformed and “free thinker” backgrounds. This Protestant Evangelical Christian Church became known as St. Paul Church because “it was said to be built on the truth of the Gospel of the Apostle Paul.”

According to the records, Lois says almost 24 gal. of whiskey were purchased for the construction workers.

The first church held services in the German language as long as nine church members wanted it (and they did until 1925).

*1854, women who became widows were voted to qualify as members after their husband’s death if they continued to meet all the requirements of membership; other women were not members.

*1858, the first organ was purchased for Easter services.

*1893 was another construction year, putting in new windows and building a bell tower. A new 1300 pound bell was installed, with the smaller bell being donated to the Town of Hermann (the Visitor Center and License Bureau at 2nd Street and Market).

* 1902—thanks to Thomas Edison’s success of improving the electric light bulb for practical lighting, electric lights were installed.

* 1907 saw construction of a new church and bell tower. The stained glass windows can be seen today that were located in the original part of the church, as well as the narthex.

* 1926 was the year an electric blower was added to the organ, so the boys didn’t have to hand-pump air into the organ.

* 1960 was a construction year, enlarging practically every part of the church from the sanctuary to improvements in the basement.

* 1965 saw the first woman elected to the church council.

* 1972 provided a more comfortable sanctuary for the congregation with the installation of air conditioning.

* 1990 included a devastating  arson fire that destroyed the parsonage/church office and educational building.

* 2004 is the year B.A. Wagner submitted his resignation as choir director after serving nearly 60 years.

Editor’s note: This 175 year celebration of the St. Paul United Church of Christ is about the leadership that provided not only a place to worship out of the weather, but also Christian fellowship and support that led to a stable and vibrant community. In the face of the hardships of recessions, depressions, World Wars and even an arson fire, church leaders and church members  sacrificed dutifully to see that the congregation remained truthful to the church’s mission of serving God.

The Advertiser-Courier visited recently with three members of the church— Mark Leech, Susan Nichols and Lois Kruse—to discuss what the church means to them in their spiritual lives.

“We look back at the proud history of this church and this congregation and what that has meant to past and current members, and we’re particularly excited about the direction our church is headed,” says Mark Leech, a long-time member of St. Paul’s and President of the St. Paul Church Council.

He says they have gone through an extensive mission-affirmation process, called “New Beginnings” to take the church forward.

“We zeroed in on helping others in our community,” he explains. “The congregation has really bought into the idea of serving through a myriad of missions. They like the fact we are making a difference in Hermann.”

He says the church is currently in the process of hiring a new minister, relying on an interim minister in the meantime.

“It’s up to us to continue to move forward with that same responsibility in understanding of the roles we play in the community and in the lives of our congregation members.”

Mr. Leech loves his church members and looks forward to seeing them every week in church.

“We come from all different walks of life, different political spectrums and yet we come to church and focus on our mission,” he says. “It’s refreshing—you feel good. We understand we’re different, but when it comes to serving Christ, we can pull together and do it.”

Church member Susan Nichols has been working on a history book of St. Paul’s Church with Lois Kruse. She says some of their mission work goes toward Hermann’s Community Food Pantry. They just completed a food drive to obtain 1,900 items and they collected over 2,000, beating their goal. She mentions a Samaritan Outreach that coordinates efforts with Hermann’s Ministerial Alliance. This involves clothing and furniture donations and emergency aid for utility bills for people that need assistance. After School Bearcats is another program.

“It’s a big part of what we do,” says Susan. “It’s a tutoring program for about 20 students that are deemed “at-risk”—kids that don’t have parental help to keep up in school.”

Members of the St. Paul congregation work one-on-one with the students at the church to work on subjects such as math and reading. In its third year, Susan says the program is a big success.

Many in the church also help out with the Friday Backpack Program, packing high nutrition meals for kids that leave school on the weekend.

The non-profit Court Appointed Special Advocates (CASA) group has an office in St. Paul’s, so the church also has members that are children advocates in Gasconade County. The list goes on . . . a safe meeting place for prospective foster parents, a meeting space for a pack of Cub Scouts, blood drives are held and clubs that donate items to people in need, such as Nimble Thimble Quilt group meets at the church. It’s a busy place and the church tries hard to make their efforts all inclusive, providing a myriad of helping experiences.

Susan was baptized, confirmed and married in the church. Her great-great-great grandfather was one of the signers of the original St. Paul Church Constitution.

“This history of the church is important to me, but it’s the people in the church community that make it so enjoyable,” she said.

Both Susan and Lois Kruse (who has played the pipe organ at St. Paul’s for three decades) are the first to recognize that the church is not a building, but the people. There is value in keeping their record, an organized historical record and Susan has been helping Lois since 2016 on their project.

“We both have the same mindset that we don’t want to get rid of anything,” she says, laughing.

She clarifies saying they have to be careful with the curation process and don’t want to discard anything that might be important, something that would lend clarity to the context of their historical periods.

“This is what I do for the church,” said Lois.

Yet, she knows she’s also reaching a time to be thinking about her replacement. She knows church music has evolved and moved towards what might be called “pop Christian music,” and she wonders if organ music—particularly pipe organ music—will ever play the central roll it has played for decades within the history of St. Paul.

“It will be sad, because it’s been such an important part of my life, but as long as the purpose of the music remains the same, that’s what’s important,” she added.

Lois says more gospel music has come into the church through the choir and The Riverside Singers, though it is not in the German tradition.

Susan and Lois know the challenge of supporting a large church that sits among other churches, in a small town, where everyone vies for greater church membership. Staying relevant within the community is imperative.

“The “New Beginnings” program has revitalized the church and with an interim and new minister coming in, we would like to keep that energy going,” said Susan.

“The stated mission of St. Paul is “Sharing God’s love by serving others,” and as long as a church does that and can be seen that it is doing that, there’s hope,” says Lois.

The church will be celebrating the anniversary throughout the month of Nov. with special guest speakers and fellowship during the Sunday worship service. The worship service is at 10:15 every Sunday in Nov., at 136 W. 1st Street in Hermann.