Now, more than ever, the world needs trustworthy reporting—but good journalism isn’t free. Please support us by subscribing or making a contribution. 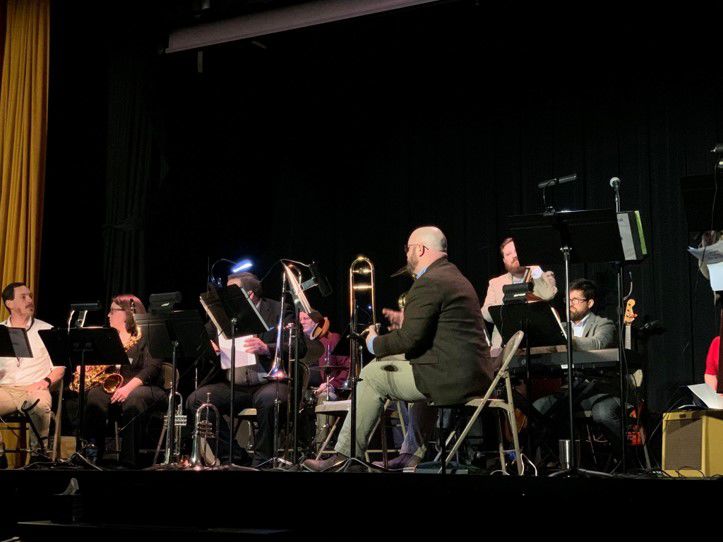 The Friends of Aaron getting ready to begin their performance at The Showboat Community Theatre. 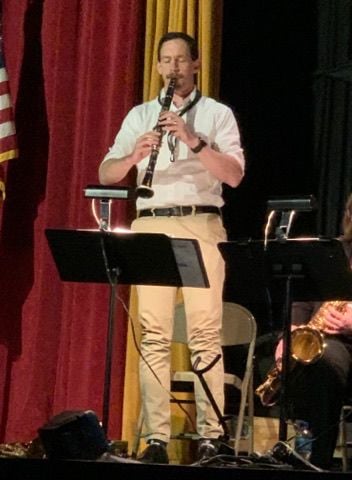 Eric Gargrave played various instruments during the performance and most notably with his eyes closed, feeling the music. He received applause numerous times throughout the program. 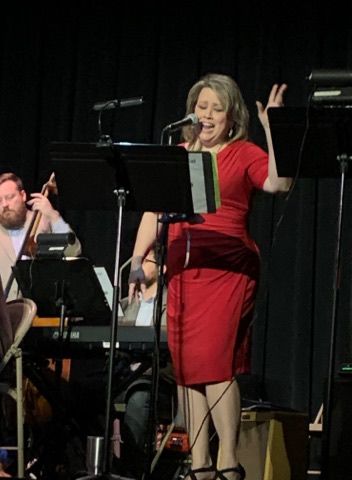 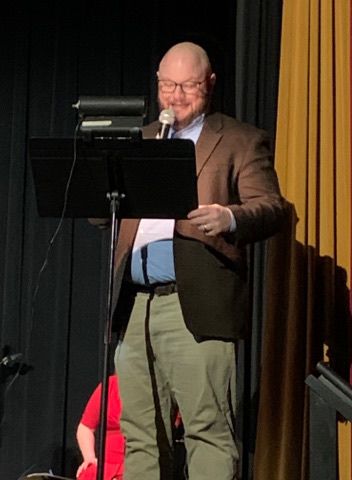 As part of Hermann’s first celebration of Black History Month the Showboat Community Theatre presented an incredible step back in time to journey through the foundations that became Jazz that we recognize today.  The Friends of Aaron a group founded in 2013 with Aaron Bounds; a Hermann High School 2001 graduate; as the eloquent leader of the group conducted a walk through early New Orleans History and the beginning of the jazz music genre.

During the introductory dialogue, Aaron reminisced about being back in a theatre where he spent a lot of his childhood in many productions. He was honored to be asked to participate in Hermann’s first Black History Month with a subject he is immersed in and is fascinated by.  Aaron explained his group would be taking the audience through a trip back in time and it was a two-hour total immersion in music history. Aaron covered early music in New Orleans and continued through the eras culminating to the beginning of a new century of the 1900s when jazz began to emerge as part of a musical revolution that included ragtime, blues, spirituals, marches and just a general mixtures that reflected incredible contributions of people of African heritage to what came to be known as a new and distinctly American music that became known as Jazz.

The talented musicians began with “Alexander’s Ragtime Band” a number that originated in 1911 by Irving Berlin which was flawlessly performed by the musicians. This was followed by “Shine on Harvest Moon” which had the audience swaying along in their seats.  The next number “The Battle Hymn of the Republic” was valiantly performed in Dixieland style and the music filled the theatre and awe inspired the audience of nearly 100 spectators, young and old enjoying a walk through the progression of jazz.Aaron explained that traditional jazz musicians would take songs from hymnals and “spice them up” such as the groups rendition of “I’ll Fly Away.” That ability to “jazz up” this spiritual was both catchy and memorable.  The performances with every number were just incredible with two hours passing quickly and the group left you wanting to hear more.

Aaron referenced several books, one suggested to him by his former history teacher, Ray Ham who was in the audience entitled: “Empire of Sin” by Gary Krist that chronicles political corruption and racial inequalities in New Orleans. Aaron began talking about the French Creole and their loyalty to French culture with the area that is New Orleans changing from French to Spanish control and then back to French control until it was sold to the United States.  The culture was a mixture of African Americans, French Creole, along with Italian, German, Irish, and Spanish immigrants and the minorities found some common ground in their love of music.  Within the elite society that was New Orleans there was a wide array of musical styles emerging  and as turbulent periods of history continued to change societies norms and what was acceptable and what wasn’t- music sought to keep the cultures of New Orleans alive and functioning through those struggles. The Jim Crow laws of the southern United States after Civil War reconstruction caused the musicians to migrate for larger cities such as Chicago and New York.

Vocalist Cheryl Pecka wowed the audience with a Creole rendition of “Eh La Bah” the English translation is “Hey Over There.”  The song is considered a traditional New Orleans song. Originally it was performed with Creole lyrics and traditional French lyrics.  It is a ‘call and response song’ and Cheryl sang beautifully with the rest of the performers responding.  It gave a festive ambience to the audience and the spirit was one of upbeat satisfaction. Pecka’s vocals on “Mack the Knife” and “I Get a Kick Out of You” were also well received.

In speaking with the audience after the performance a favorite that was performed was “St James Infirmary” as several people recognized the music from movies and television shows.  The song was made famous by Louis Armstrong in 1928.  According to research, it has been attributed to various authors most notably Joe Primrose which was a pseudonym for Irving Mills.  The song has been recorded in various versions some leaning toward the blues genre and still others combining the blues with jazz and bringing the listener to a sad story told within the lyrics.

The historical information shared by Aaron on stage educated the audience in how much was contributed from the beginnings of the music rich area of New Orleans.  Famous African American musicians discussed included: Jelly Roll Morton, Charles “Buddy” Bolden, Charley Galloway and Louis Armstrong. To follow Friends of Aaron you can access the group on Facebook.