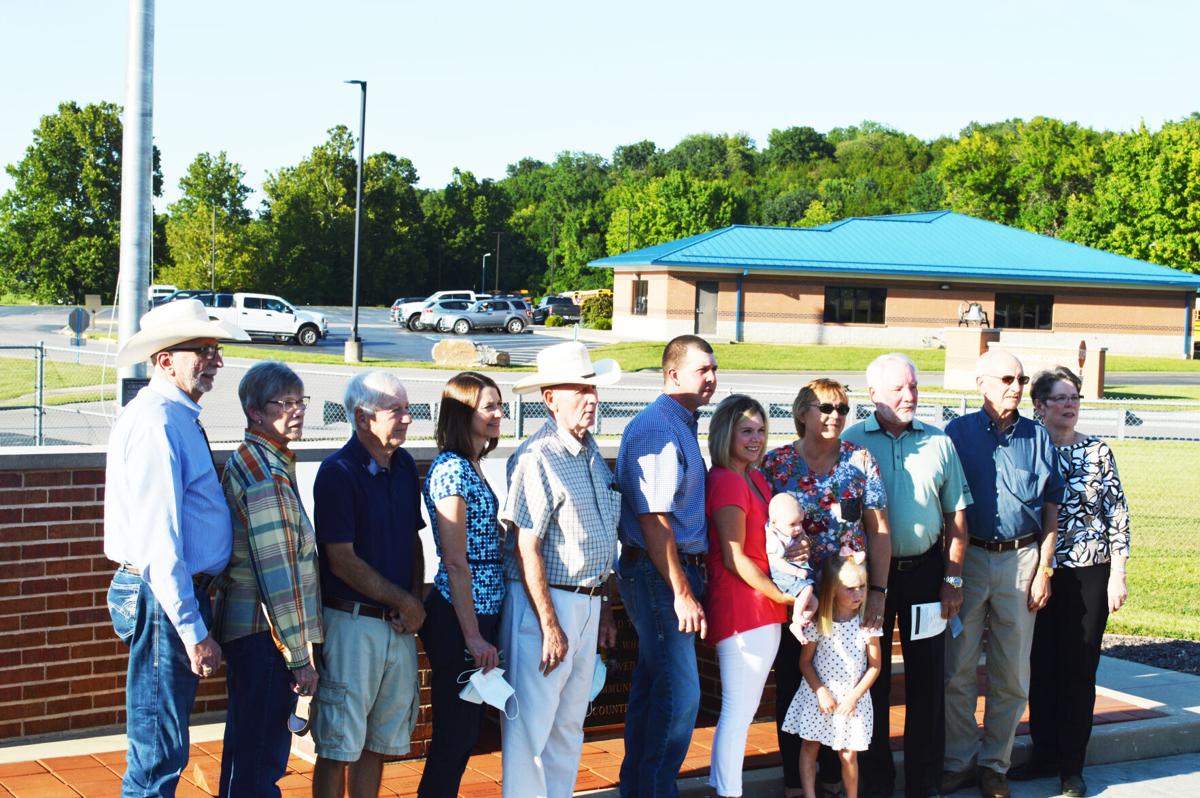 The community contributions of former Hermann High School Principal Lloyd Stock were recognized by Gasconade R-1 officials and others on Friday night.

Stock is the 2020 inductee of the Bearcat Memorial. A ceremony in his honor was held prior to the football game at Bearcat Memorial Stadium. With its start in 2007, the event has always been held before Hermann's first home varsity football game of the season, and highlights an individual's leadership in the community, along with their history and service. It is the highest honor bestowed by the Gasconade County R-1 Board of Education those deemed worthy of such recognition.

Superintendent Dr. Scott Smith said the memorial further signifies a person's contributions to the state and to the nation through military service, personal sacrifice, or exemplary lives. Stock served with the U.S. Army in World War II, as a member of Company B in the 878th Airborne Engineer Aviation Battalion.

According to Smith, previous inductees have set a high bar for future inductees, and that it was therefore fitting that Stock be included.

"Mr. Stock was someone who had a love of learning…," Smith told the gathering of family members, prior inductees, and school leaders. He noted that Stock was a lifetime teacher and school administrator in Missouri, with his first teaching job in a one-room country school in Franklin County -- where his love for education grew.

He and his family moved to Hermann in 1951, after he received an agricultural education degrees from the University of Missouri. He had previously attended Central Wesleyan College in Warrenton. He also earned a master's degree in school administration from MU.

In Hermann, Stock taught high school vocational agriculture. He later became high school principal, where he remained until retirement in 1978.

"Mr. Stock was known as a fair man who held his students to a very high standard," Smith said. "He felt that every student should have the opportunity to excel with perseverance and dedication. He believed that not one quality made or represented a person, but that students should be involved in a variety of academic and extracurricular activities while in high school."

The district continues to recognize students with the annual Lloyd Stock awards and scholarship to those who illustrate those traits.

Smith added that Stock also served as a bus driver, "picking up students before there was a town bus route and driving the pep bus to games. He didn't hesitate to do whatever was needed for our school and our students."

He continued to use his experience and talents after retiring from the district, serving as director of human resources for Handi-Pac and Blanke Plastics and also as an auction clerk for Kallmeyer Auctions, Kallmeyer-Schroff Auctions, and Schroff Auctions. He also spent time woodworking, hunting, fishing, and with family.

"He had unending enthusiasm and energy, and you could see that in everything he did," said Smith, asking attendees to reflect on Stock's many contributions to Hermann. "He left his mark on this world that will live on forever in the people he mentored and came into contact with. From what I have learned about Mr. Stock, he would encourage each of us to do what we can to make a difference in our community."

Board President Mark Brooks joined with family members to place a brick with Stock's name into the memorial, which is located adjacent to the stadium.

"These are the qualities we want to instill in our students, as they go out into the world," Brooks said.

A son, David Stock, spoke on behalf of the family.

"It is truly an honor," David Stock said, referring to the memorial brick that honors his father. "This would be a proud day for him."

Do you think the COVID-19 pandemic will get worse before it gets better?