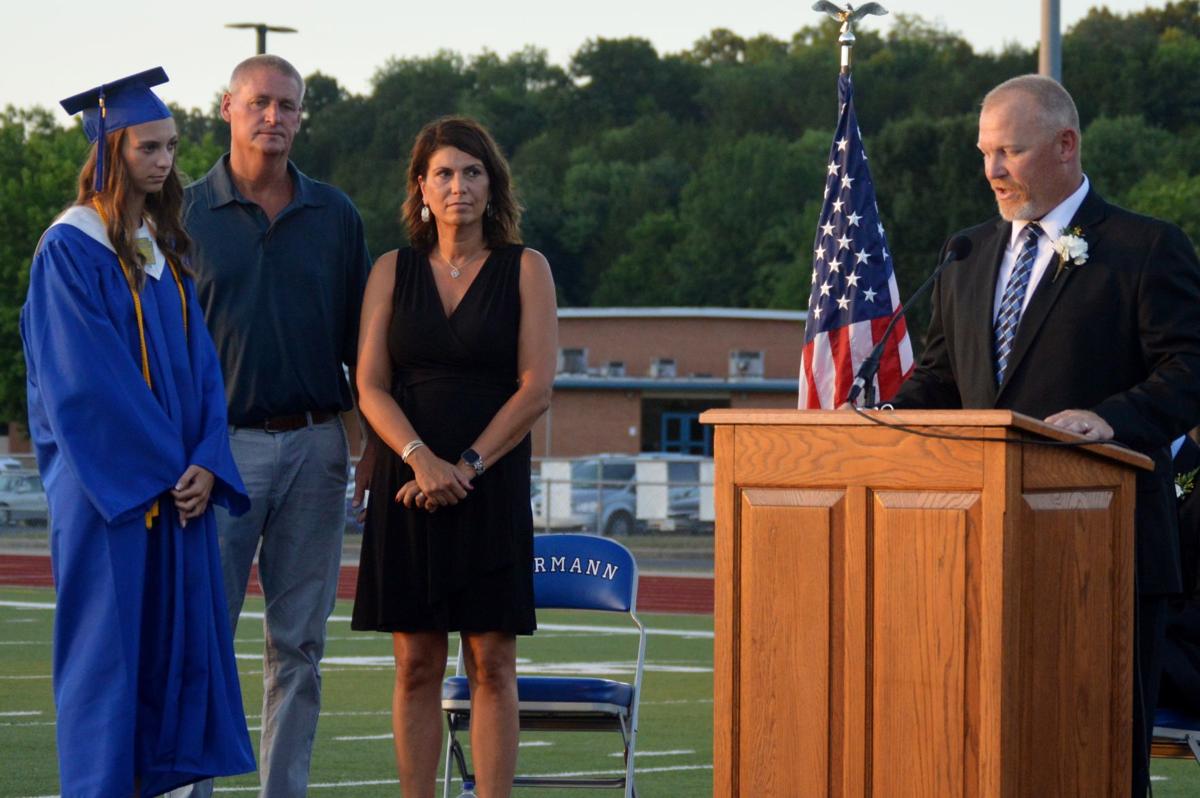 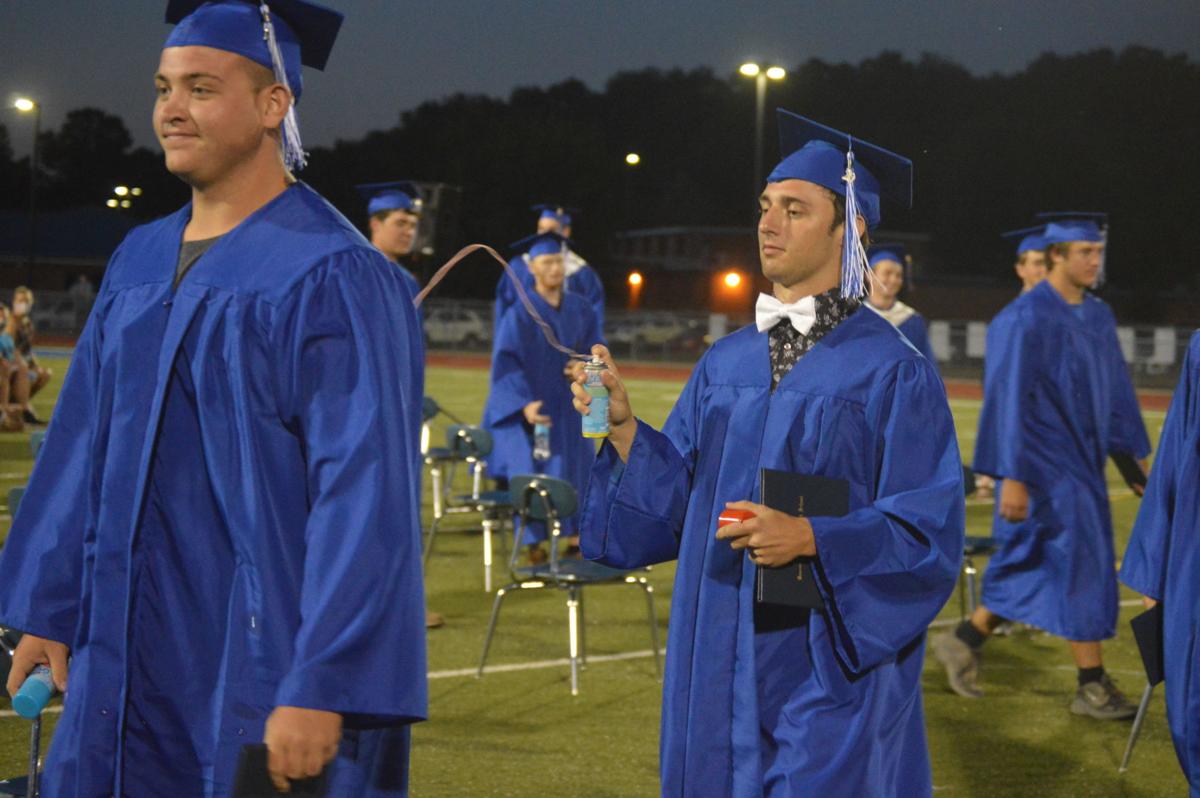 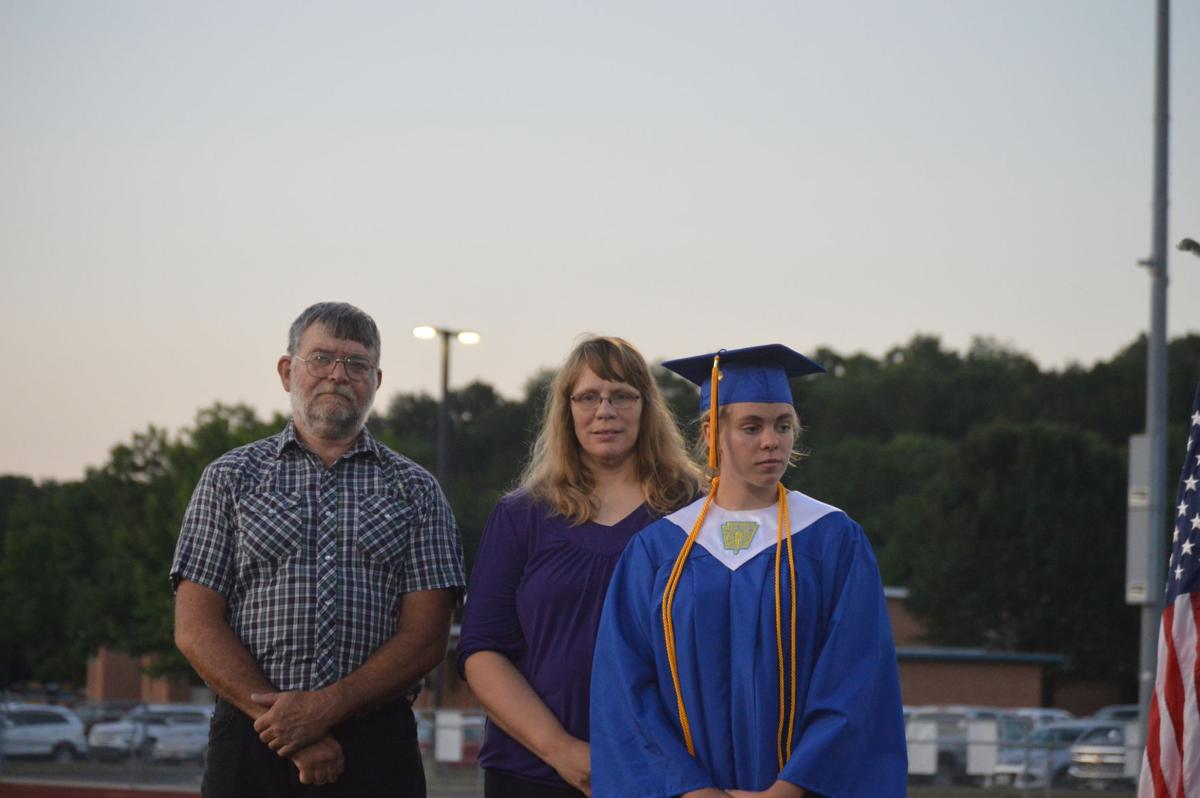 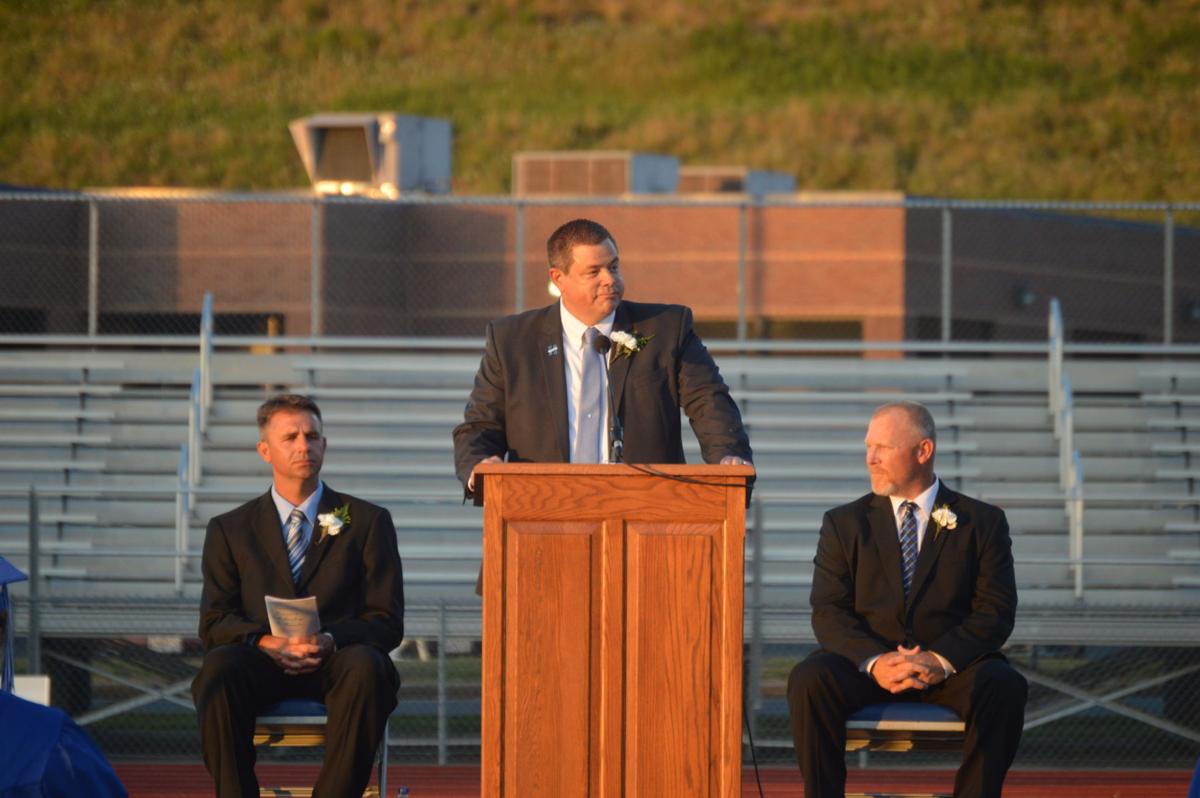 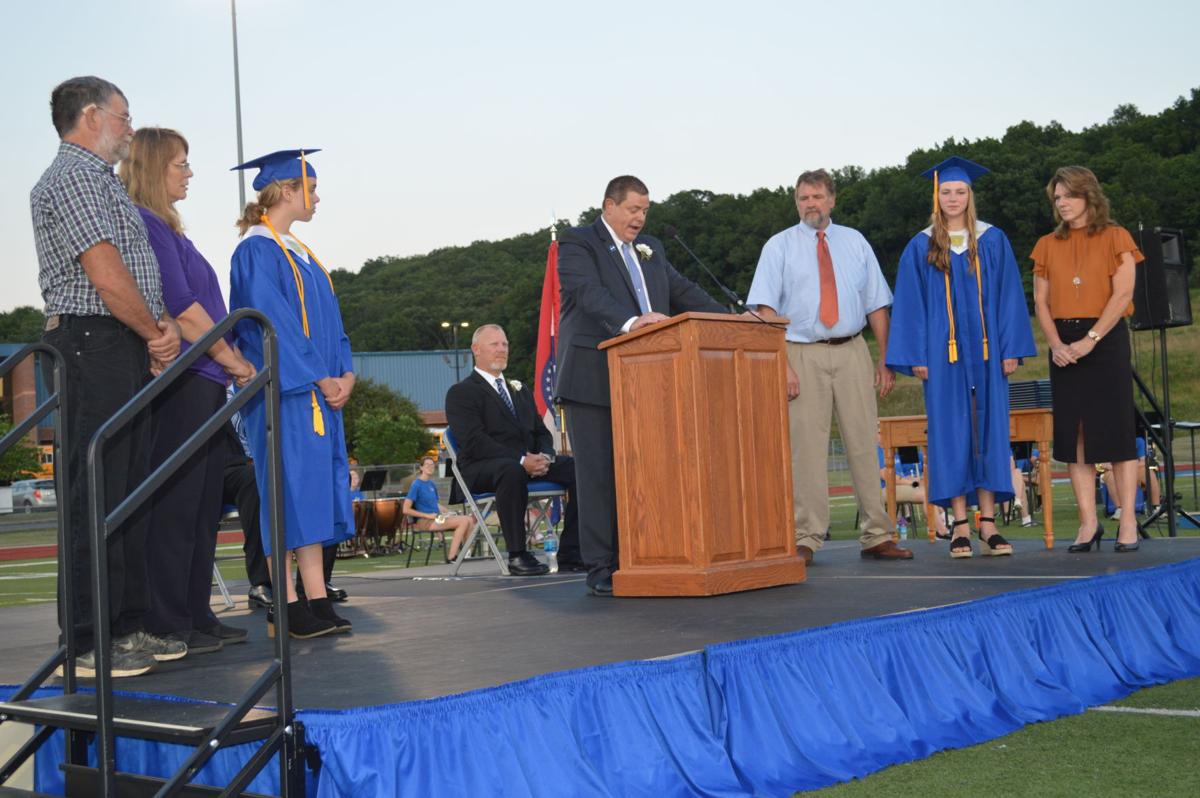 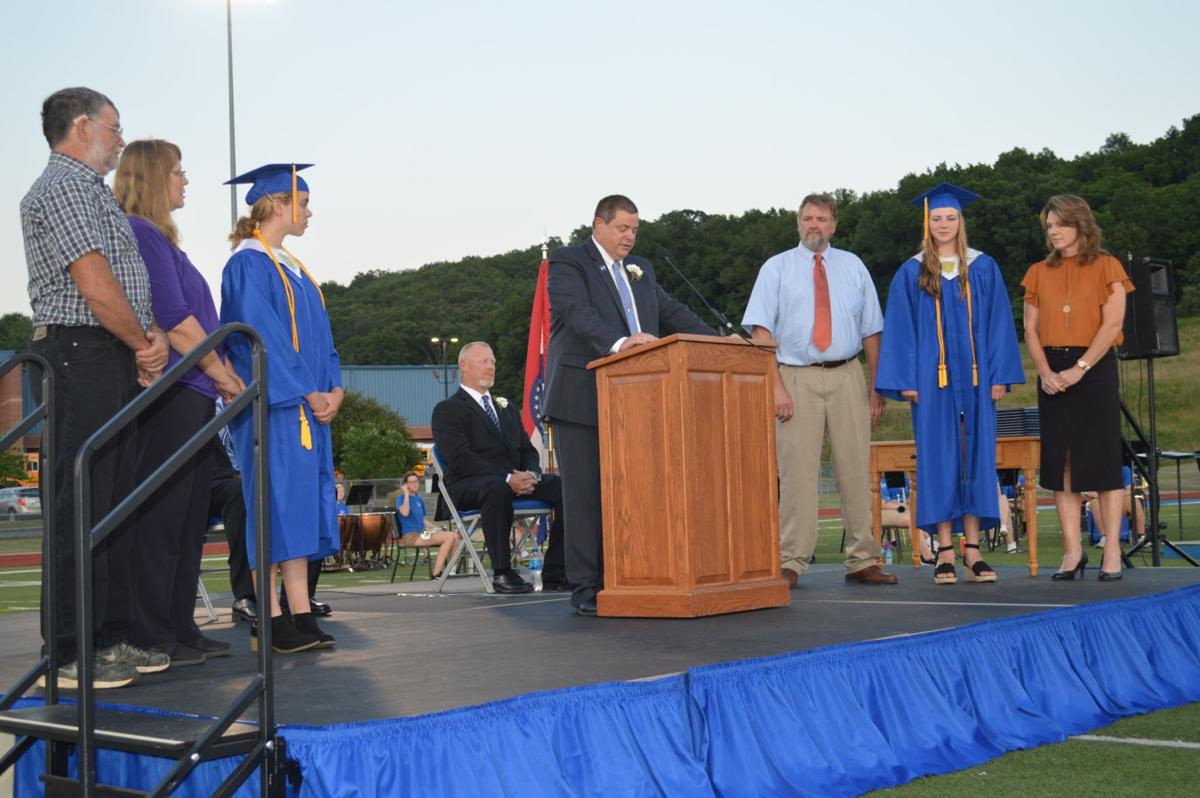 More than 60 Hermann High School graduates launched themselves into the next exciting phase of life Sunday night, despite the void caused by an unanticipated pandemic.

This year's Gasconade County R-1 commencement exercises for the 63 students were held in Bearcat Stadium -- out of school board, administration, and community concerns for the spread of COVID-19. The event successfully went through under the lights, with a limited number of guests organized by school officials and special precautions -- such as social distancing -- taken because of the virus. Bottled water was provided to everyone on the sultry July evening outdoors, with graduation livestreamed for those unable to attend. Face masks were available to anyone in need, and hand sanitizer was placed at the concession stand.

Megan Schneider, the Class of 2020's president, told the audience it was to be a night celebrating accomplishments and the students' ventures out into the world. Her thanks echoed those contributed by other class leaders and school administrators. Yet bittersweet effects of the coronavirus were not lost on anyone throughout the ceremony. Plans for the graduation itself were revisited on numerous occasions.

"Our time here at HHS was cut short," Schneider noted of how the virus cancelled spring classes. "This is supposed to be the best year of our high school experience….We ask ourselves, 'Why me? Why now?' "

This year's graduating class featured a tie for valedictorian, allowing both Elly Krueger and Lydia Schneider to speak before their fellow seniors in a shared capacity.

Krueger's thanks included classmates "for enjoying this ride with me." Her speech focused on good experiences from four years of high school and forthcoming opportunities in life.

"We all discovered we fit in somewhere," she told the class. "We found our place."

Her remarks also touted academic and athletic accomplishments the seniors had attained.

"This is a class with talent and grit," Krueger said.

The door of being a high school student may have closed, she added, yet with another door opening and the limits confined only by one's imagination.

"Don't let fear make the decision for you," she told fellow graduates, whom she also counseled to be true to themselves. "It seems like overnight, we have grown into our own person."

In her address, Schneider relied on a quick pace and humor in advising the class on their paths. She said this was the first time she's seen many classmates since the pandemic forced a cancellation to their classes.

"We now have the chance to start our own story," she said, adding it's important to have the right attitude. "The best is yet to come….Be happy while you're living…."

Salutatorian Jenna Rood noted some fellow students who have already embarked, albeit in an early fashion, on their intended careers. The pandemic may have halted progress by the class, but its members were still able to compile an impressive list of achievements.

"We have had to be flexible," said Rood.

She asked the seniors to continue their positive traits, and to work hard to reach their dream life while leaving their mark on the world.

"We have had to be flexible," Rood said. "We have grown into people we weren't four years ago….Be curious. Take risks. Desire more."

School officials also had their say on the night, in commending the seniors and observing the backdrop painted by the virus.

Superintendent Dr. Scott Smith thanked and congratulated the class for its patience while administrators and board directors regularly wrestled with the pandemic's consequences for the district. He recognized the board, principals, staff, and parents for working under the constraints imposed by the outbreak and reviewing ever-changing plans for educating the students.

Like no others that preceded them, the 2020 class, said Smith, had to adjust to vast alterations in its routine, such as virtual learning. The seniors inspired him by their actions, and he was glad such a program could be offered to them despite the unusual circumstances.

"Hopefully, you can tell this community loves you," he said.

High School Principal Chip Stutzman pointed out that the graduates had cemented their unique place in Hermann school history, and that officials are eager to see how they fare in professional life.

"You'll be known as that class. You know, the one during the pandemic," he said. "We are proud of you."

Stutzman recognized all seniors by virtue of their future plans: enrolling in either two-year or technical colleges, or four-year institutions, or by entering the work force or military. Two who are already in military service, Alyce Jones and Colby Unger, were not present to receive their diplomas.

Early on in the ceremony, Smith announced that this year's Spirit of the Bearcat awards were being given to Edgar Brehe and Craig Schannuth. The awards in part honor those community members who have exhibited volunteerism and selflessness on behalf of the district.

The Hermann High School Class of 2020 totaled $175,470 in local scholarships, awards, and college scholarships, according to Kate Schannuth of the school's guidance office.

Should we allow schools to reopen?