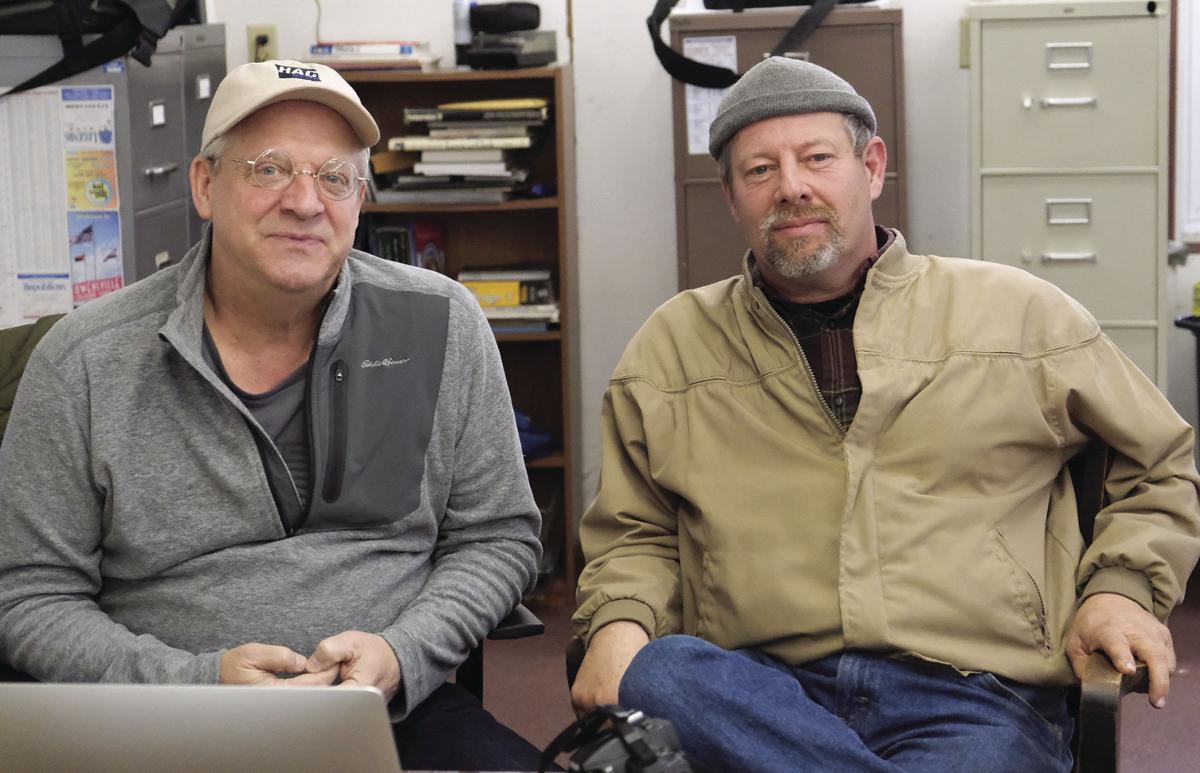 Hermann Advertiser-Courier Editor John Buckner takes a break from interviewing Clyde Zelch, who was a contract site supervisor for the U.S. State Department in charge of security at the American Embassy in Baghdad, Iraq, this past spring. 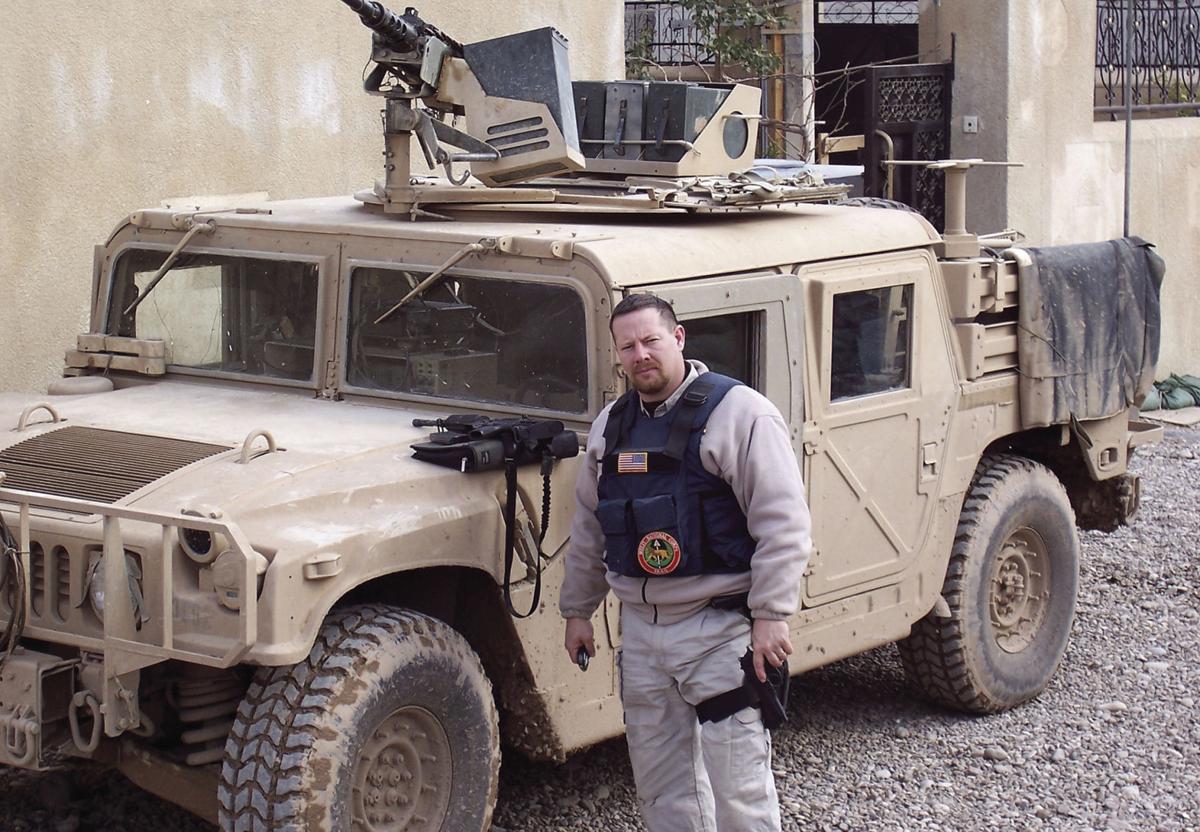 U.S. State Department security contractor Clyde Zelch stands beside a Hum-Vee during one of his assignments. The veteran served in Iraq, Afghanistan, Africa and Egypt.

Clyde Zelch is probably glad he can sit near the woodstove this winter as he gets news of the aftermath of the White House order to take out Iranian Maj. Gen. Qassem Soleimani and an Iraqi paramilitary leader near Baghdad’s airport last week. The Gasconade County resident (Rosebud) and Air Force veteran returned from State Department security duties in the green zone around the American embassy in Baghdad just last May. The Advertiser-Courier asked him to inform the A-C readership about working on a security team assigned to protect the American embassy.

To set the stage, The Wall Street Journal reports rocket attacks in recent weeks by Iranian-backed militias against U.S. bases and concerns of retaliation from the Soleimani killing forced the U.S. to place priority on protecting troops rather than conducting operations.

This weekend, the U.S. military said that it was suspending all training operations with partners against Islamic State to focus on protecting Iraqi bases that host U.S. troops. The U.S. has also issued a warning advising all American citizens to leave Iraq.

A Monday WSJ editorial stated, “The U.S. can’t, and shouldn’t, remain in Iraq if American diplomats and soldiers are under siege. Iraq’s security forces failed to protect the U.S. Embassy last week, and they proved unable to stop Soleimani and the Shiite militias that fired rockets at U.S. troops 11 times in two months.”

Mr. Zelch, who’s first trip to Iraq was in 2004, has served the U.S. as a contractor working for the Department of Defense and/or the State Department within the Department of Diplomatic Security. This Department is now under the direction of Secretary of State Mike Pompeo. He has also served a year and a half in Afghanistan, as well as in Africa and Egypt. He has provided security for fixed locations such as the Iraq embassy, run convoy missions throughout Iraq and Afghanistan or protected dignitaries. He said he had to be well-trained and armed.

“The American embassy in Iraq is the biggest embassy on the face of the earth, and it sits right on the Tigris River,” said Mr. Zelch.

On-line source Wikipedia confirms that “at 104 acres (42 ha), it is the largest and most expensive embassy in the world, and is nearly as large as Vatican City. The embassy complex cost $750 million to build and reached a peak staffing of 16,000 employees and contractors in 2012.

“This last time, I worked outside the embassy compound with the Iraqi military, trying to control who could come in,” he said. “I was as front-line as you could get, looking for bombs or attackers that might be smuggled into the embassy compound for a Trojan Horse-like attack.”

As a site supervisor, Mr. Zelch was in charge of armed Americans, like himself and bomb-sniffing dogs that searched for explosives. He said most of the State Department people working in the “inner circle” in the embassy had no idea of the security measures used to protect them every day.

He says General Soleimani, commander of the Iranian Revolutionary Guard’s Quds Force, a division primarily responsible for extraterritorial military and clandestine operations, has been known for years, to be plotting against the U.S.

“In a lot of ways, the Iraqi people are used for Iran’s special interests,” he says. “They stoke hatred and get the Iraqi people to revolt [in this case] against a government that’s trying to help them—both their own and ours.”

He says one of the problems being an American over seas defending an embassy is, if someone were to attack with a firearm, ordinarily, you would kill them.

“We were defending the American embassy as though it were American soil for all the people that work in there,” he explains. “If they attack with no weapons, someone can say ‘They’re just protesters,’ and it gets confusing [to know what to do to serve effective protection].”

He says American media portrayals of “grieving protestors” that attacked the embassy were not truthful.

“In my opinion, we were too easy on those people that [came from the outside] to attack the embassy,” he said. “This outer perimeter is huge that surrounds the compound. Iraqi people actually live in this area.”

He says the embassy is heavily fortified with guard towers.

“They (the protestors) got into part of the compound, but did not get into what we call the American embassy building,” he explained. “That’s from what I’ve seen and conversations with the people that still work there.”

There are fundamental differences between the Iraqi’s or Muslim world in general and the western world when seeking peaceful solutions instead of hostile actions according to Zelch.

“It would be naive in the predominantly Muslim countries to think that anyone is going to get along very well,” he said. “Being raised as a Christian, our ability to get along and to compromise is usually seen as a good trait. Overall in the Muslim world, getting along and compromising for the good of everyone is seen as weakness.”

He says it may take 100 years, if ever, for Iraq to become a democracy in the way the western world views a democracy.

If carried out, an expulsion of the approximately 5,300 American troops would deprive the U.S. of bases to conduct operations against Islamic State in Iraq and make it much harder to provide logistical support to the more than 600 U.S. troops still in Syria. It would also put an end to the American training of Iraqi forces that still have difficulty controlling territory in contested areas north of Baghdad and along Iraq’s border with Syria, former U.S. military commanders and experts said.”

Zelch says most of the Iraqis he has met don’t want Iran calling the shots for Iraq, but it is a complicated picture. One-half of Iraq’s parliament made up of mostly Shiites cast their votes to oust the Americans, because they are sympathetic to the Iran-backed, Shiite Muslim Kataib Hezbollah militia, but most of the Sunni’s and Kurds were not present to vote, as a protest—they want the Americans to stay.

At the present time, Zelch thinks the Iraqis feel frustrated and vulnerable to outside forces.

“Most of the Iraqis in the very beginning were very happy that the U.S. ousted Saddam Hussein,” explained Zelch. “If you were to talk to them now, it’s been so long, that they’ll say they would be better off with Saddam—Shiites and Sunnis. But there are a lot people there that realize if we left, it might be total chaos.”

He says the Iraqis aren’t as peaceful as those of us in the western world. Having lived and worked with them for years, the A-C asked for a quick sketch of them as a people.

“They are very emotional and always quick to blame someone else for everything,” he says. “Instead of taking responsibility for themselves, they’ll blame America, Israel or anybody that happens to not be there.”

That said, he says he knows many Iraqis that he considers his friends.

“Many Americans are loyal to the country, but the Iraqi people are more loyal to a tribe—an area,” he says.

Zelch is proud of the American conduct he saw in all his travels, sometimes under great duress in war zones.

“Most of these guys (contractors) are patriotic and had served in the armed forces or in law enforcement,” he explained. “In all those years, I never saw an American do something that was dishonorable. In this culture, we are held accountable for every bullet.”

He says they held their fire while being fired upon and were very conscientious of the presence of civilians in the line of fire.

In lieu of current troubles back at the Iraq embassy, he doesn’t see a day without an American presence in the country. Zelch views the embassy as a stabilizing force in that chaotic part of the world. It’s a place where people can come to seek asylum or get a visa and he’s glad he could play a small part to promote democracy in that part of the world.

“I had served in the military and thought about joining the military again, but found another way to serve our country without having to join four years at a time,” he explained.

With a family and getting up in years, he was able to sign one-year contracts to obtain his security clearance for security work.

Whether it was for a way to make a living with hard-earned skills or the thrill of adventure the bottom line is that contract security work is a dangerous business.

“Many got killed,” he says, using past tense. “How many American contractors have died? he asks. “It’s very difficult to find out.”

One thing is for sure. An Iranian general was taken out by a drone, based on airstrike attacks he could have coordinated, that killed 27 people—one of them an American contractor.