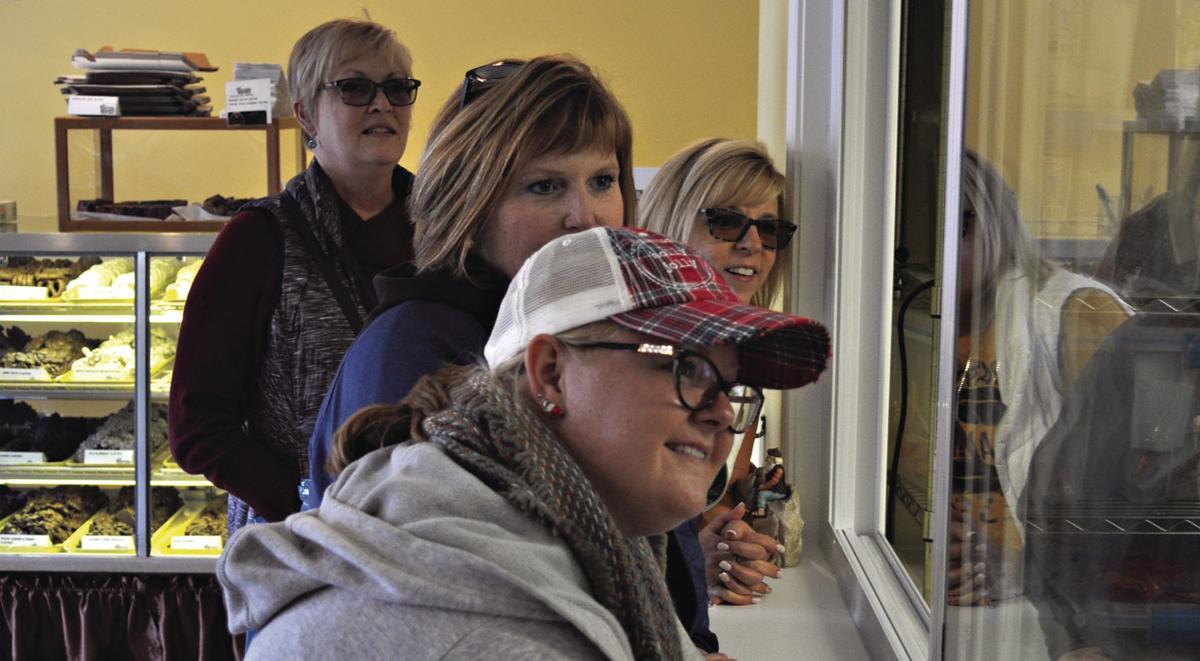 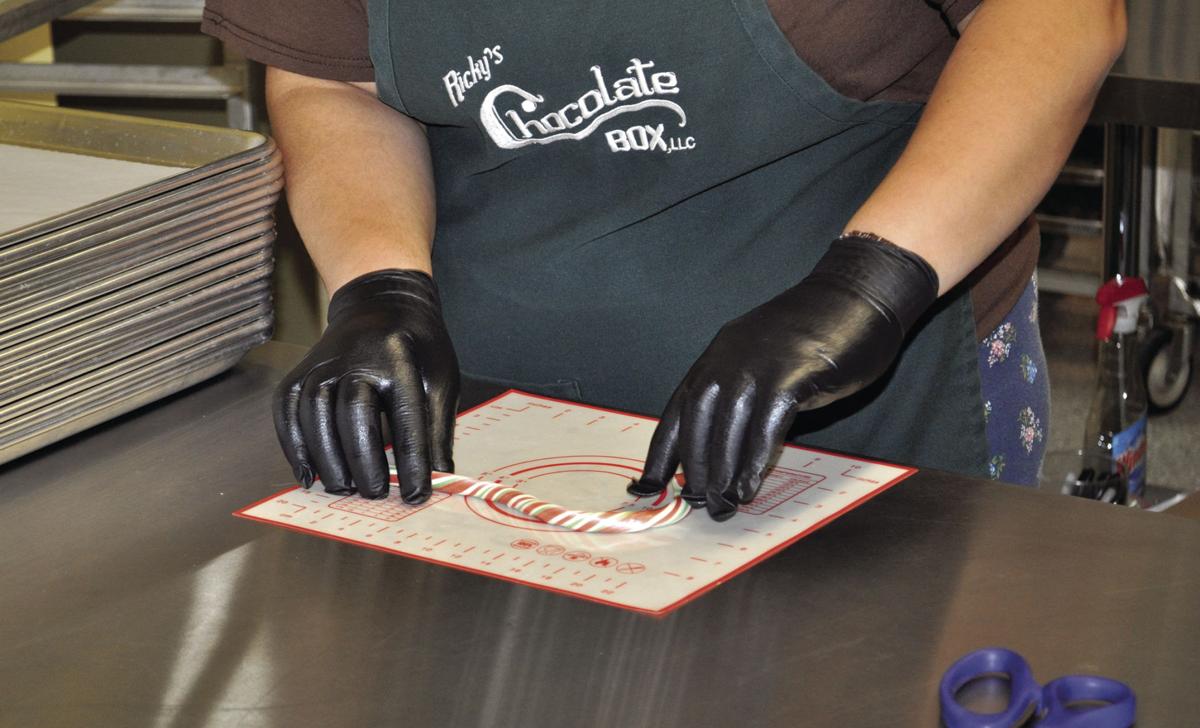 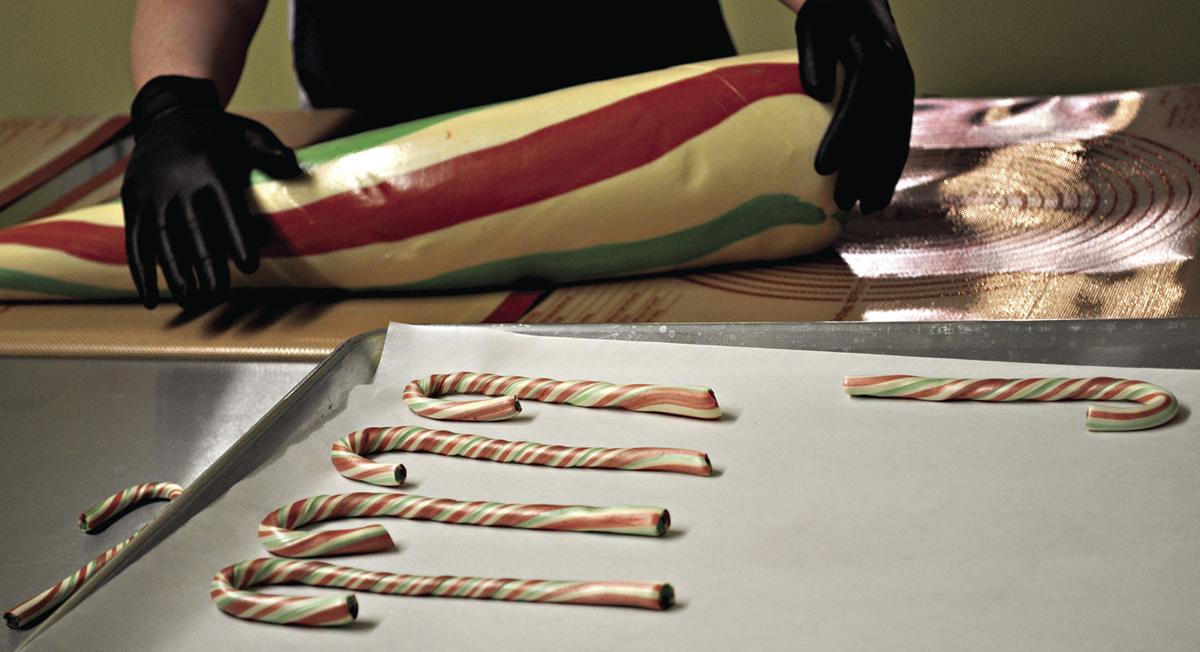 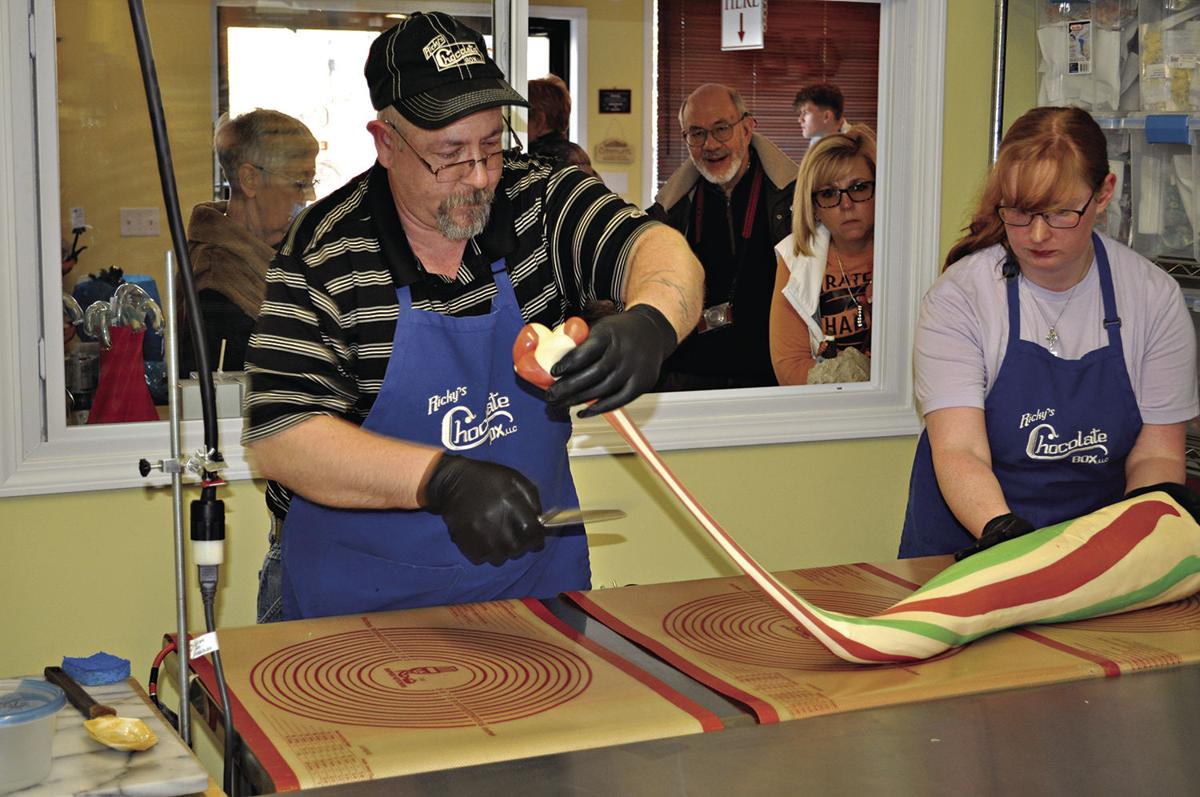 While confectioner Amanda Schulze continues to keep the candy working on the heated pads, James stretches the end and cuts a length off that will be a candy cane. He twists each piece that will give it the barber pole look of candy canes. 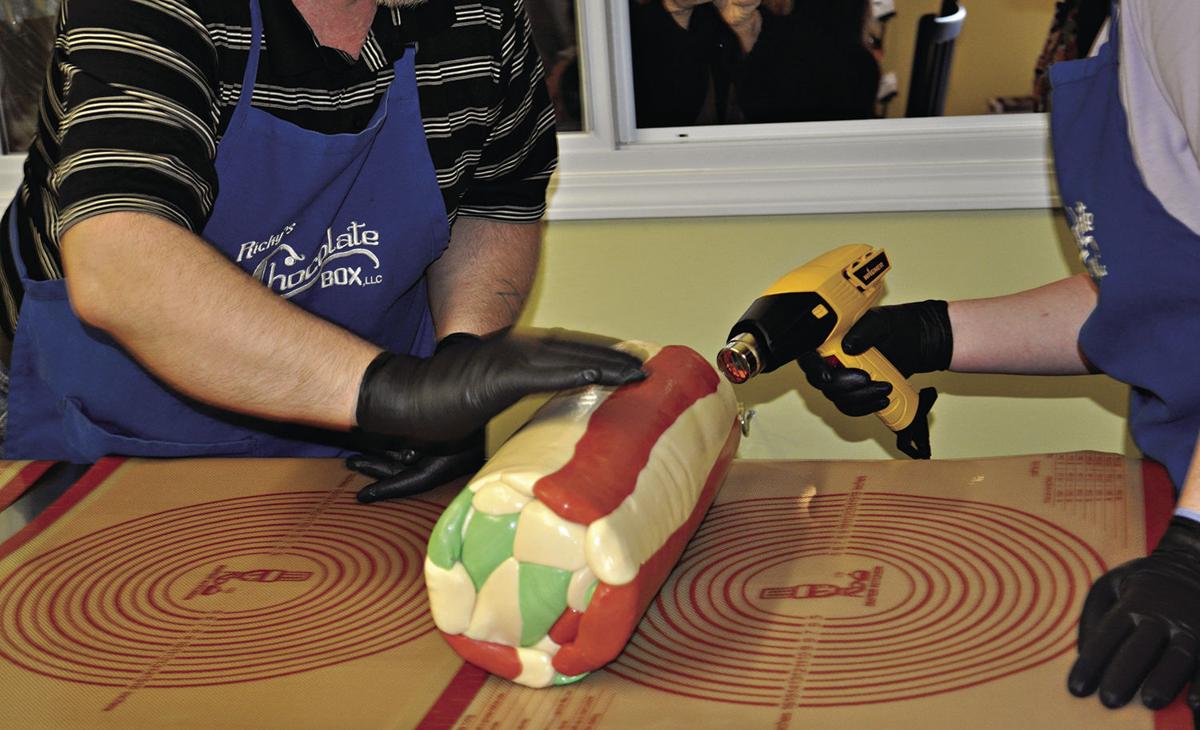 The fat log is now being heated and worked to produce an elongated shape that looks like a big baseball bat. 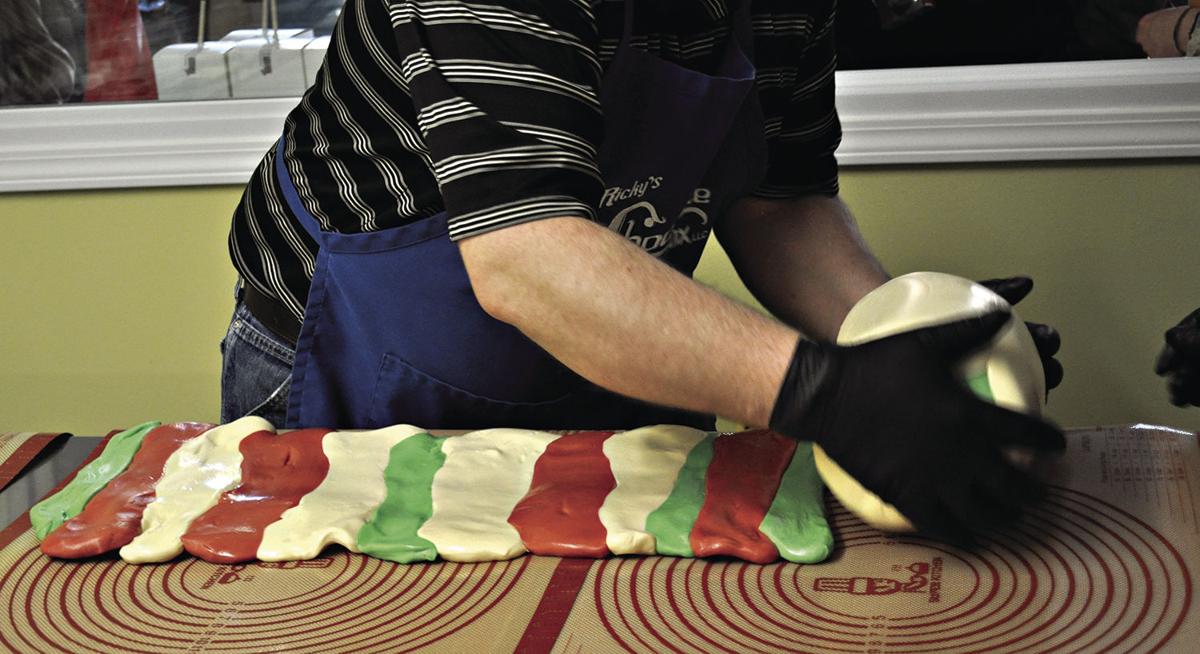 James takes the fat candy log and rolls on the outside cover, which will eventually produce the candy cane stripes. 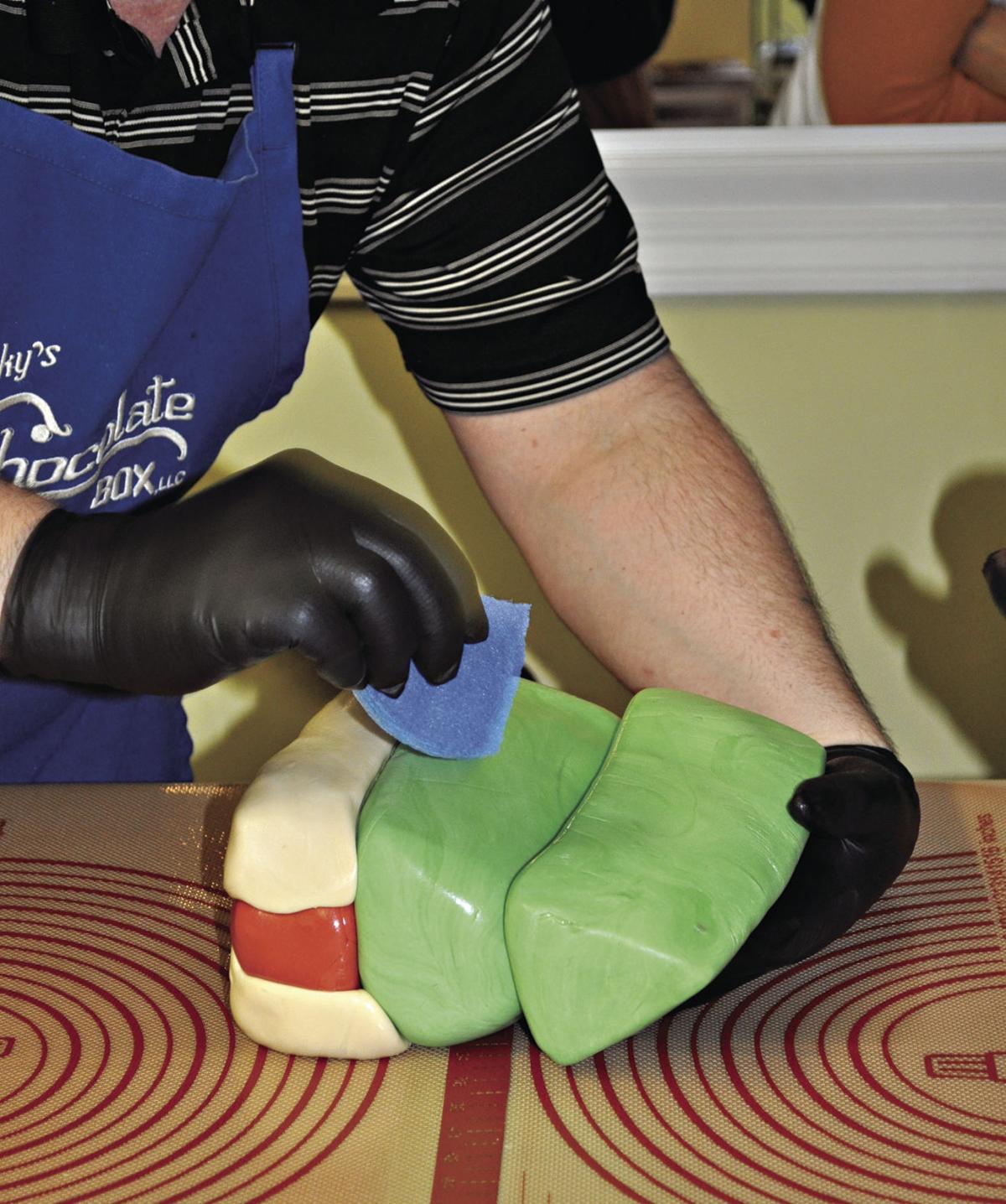 Once the candy is pulled, the different parts are stuck together that will make the eventual design. These candy canes have a Christmas tree in the center of the cane. If you break off a piece, you’ll see the tree inside. Here, James builds what will become a miniature little tree once the candy is stretched. 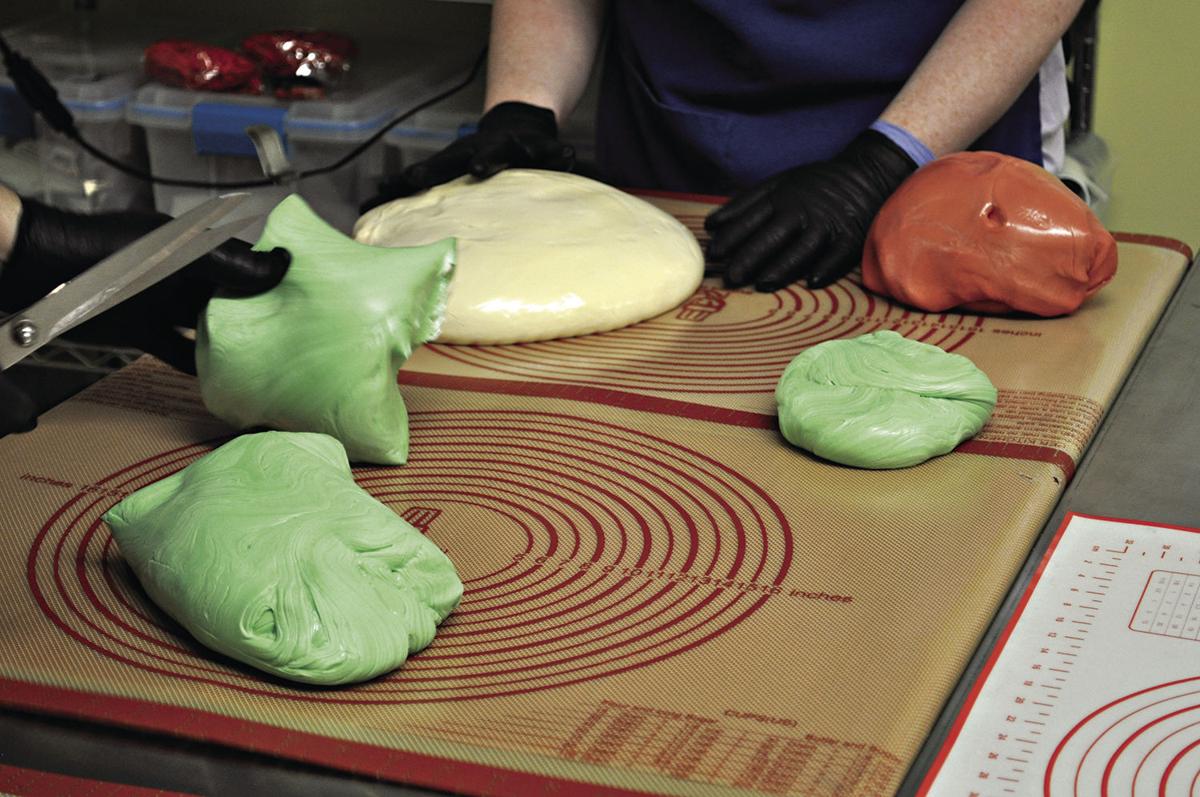 The candy is taken out of the cooling tray, peppermint oil is added to the batch and it is cut into smaller pieces, representing the parts of the candy that are to be colored red, white and green. Coloring is added and the candy is worked by hand and kept warm on heating mats so it remains pliable. 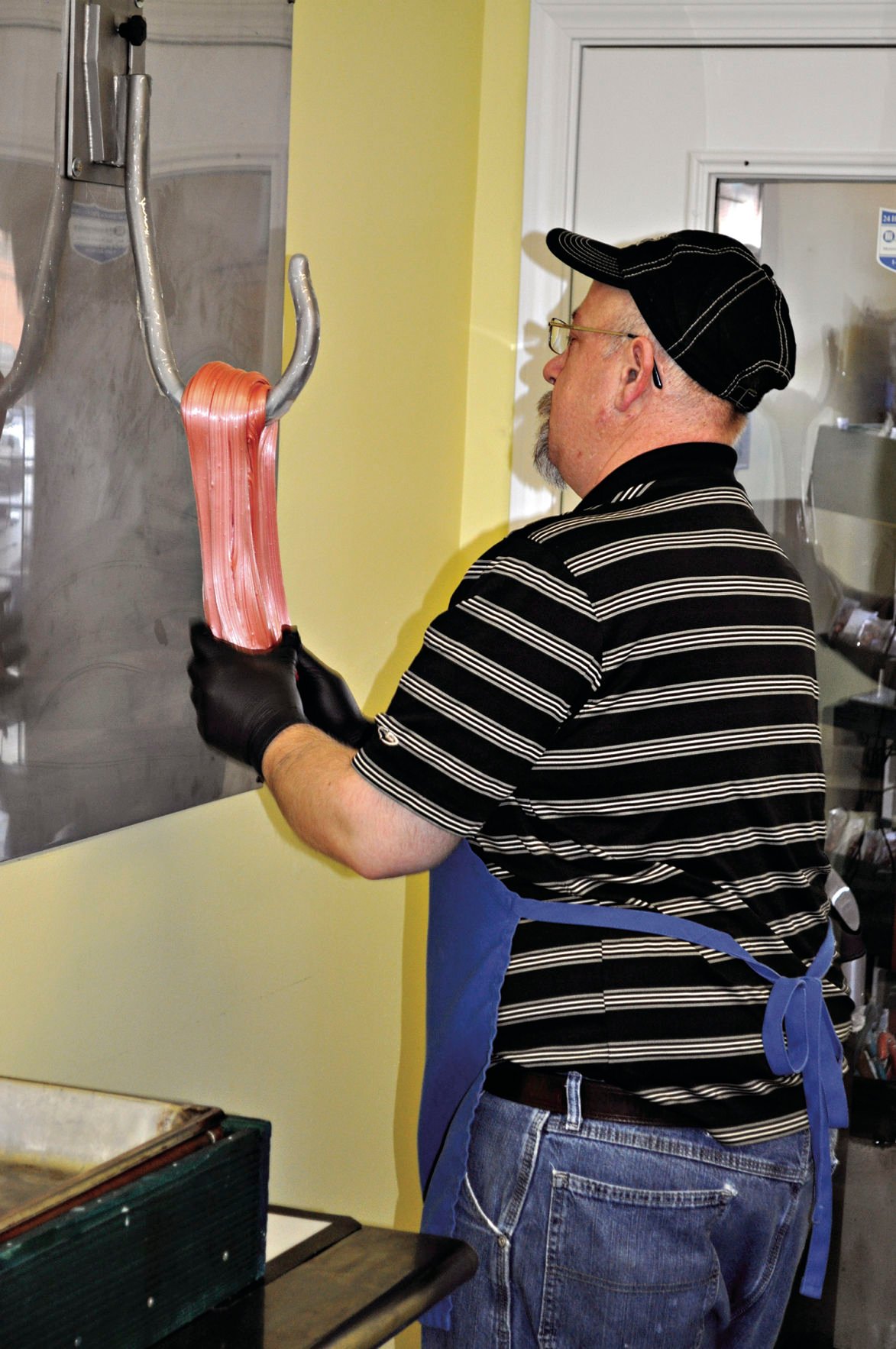 Each piece is pulled on a hook. “As you pull it, you’re incorporating air pockets in there,” says James. “That will make it crunchier and give it a lighter color.” 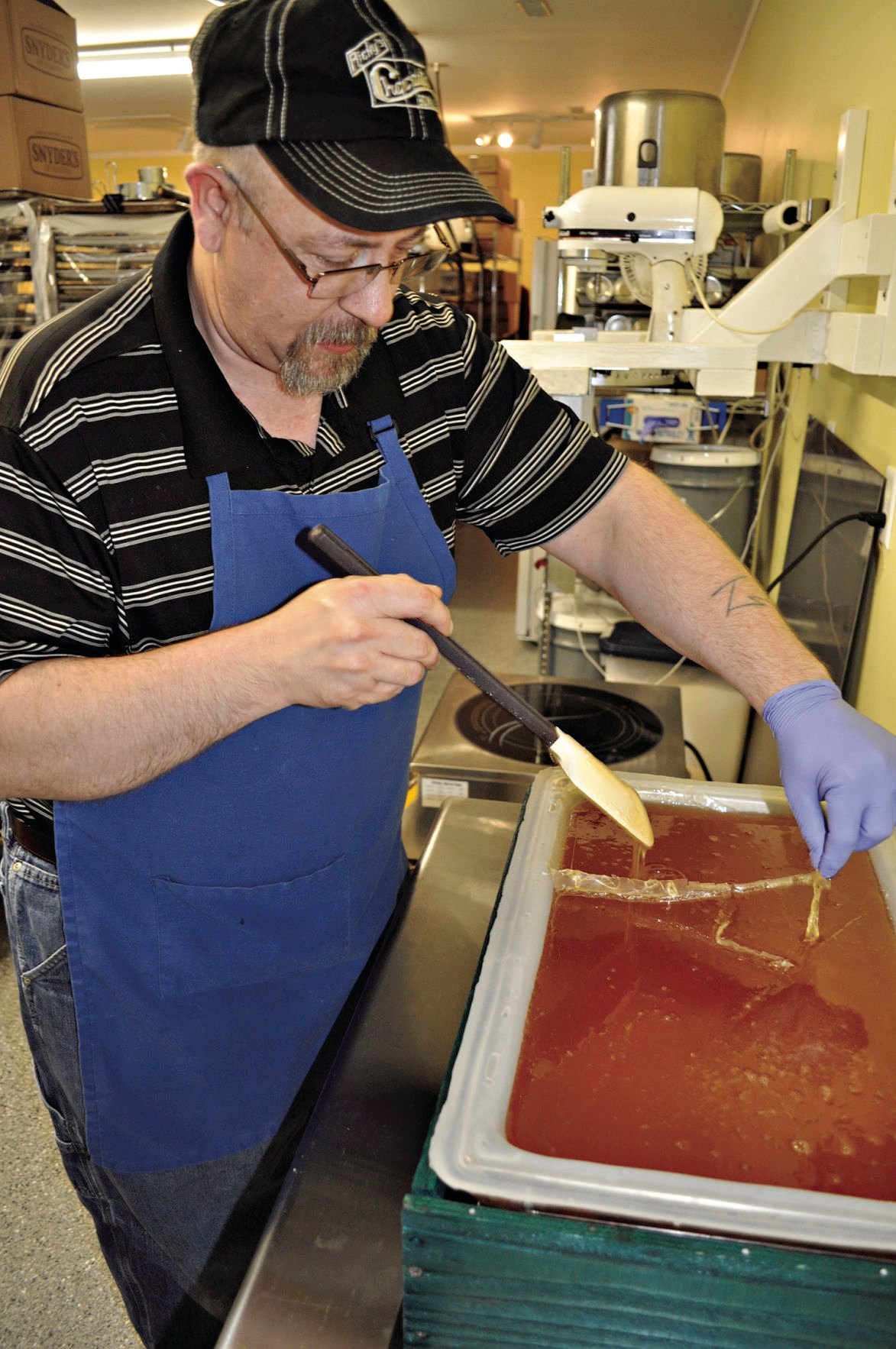 Once the sugar syrup is heated to the proper temperature, it is cooled down to 170 F in a tray that James designed himself. Here, he peels the cooled hardened candy edges off the tray perimeter. 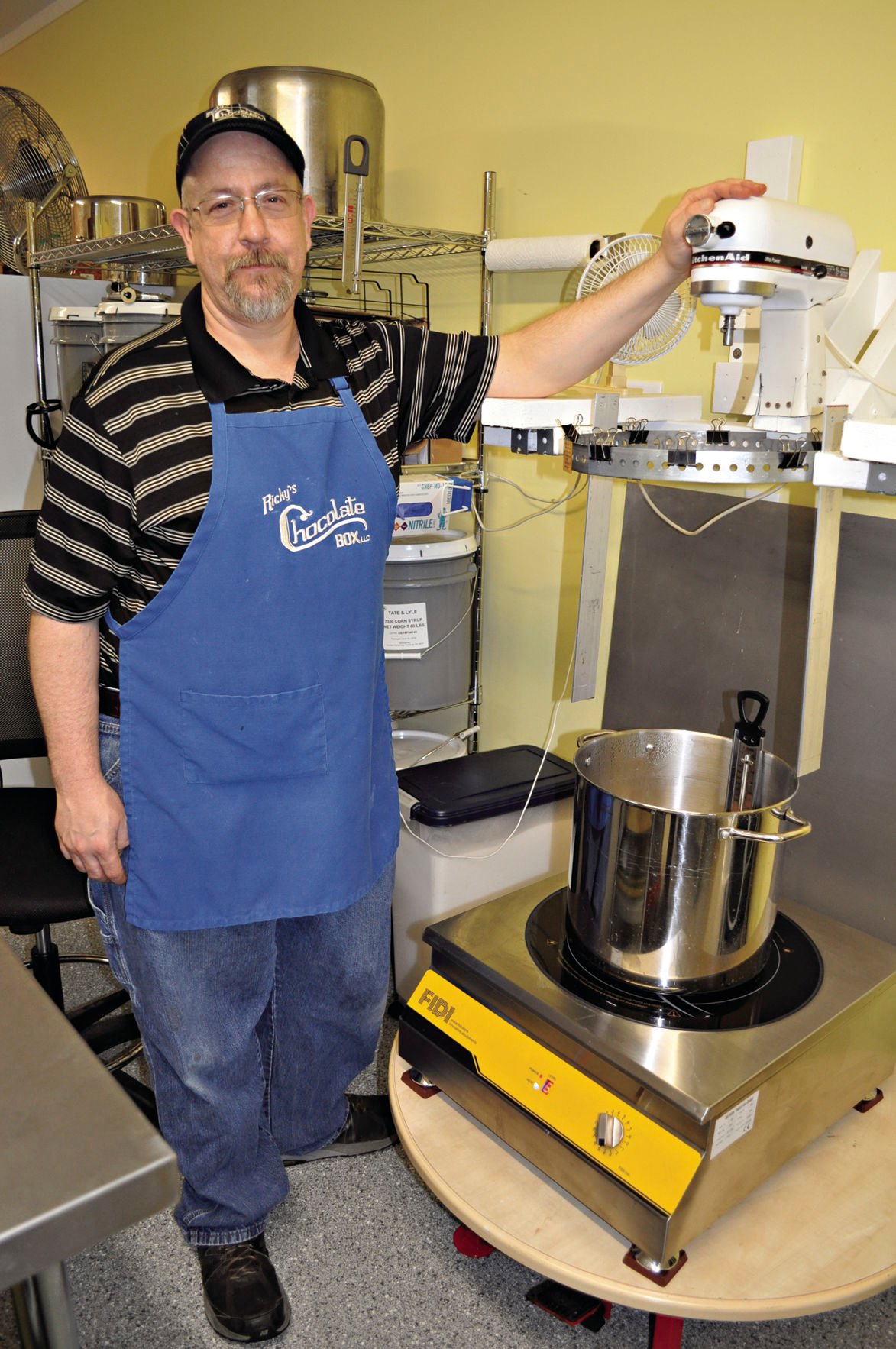 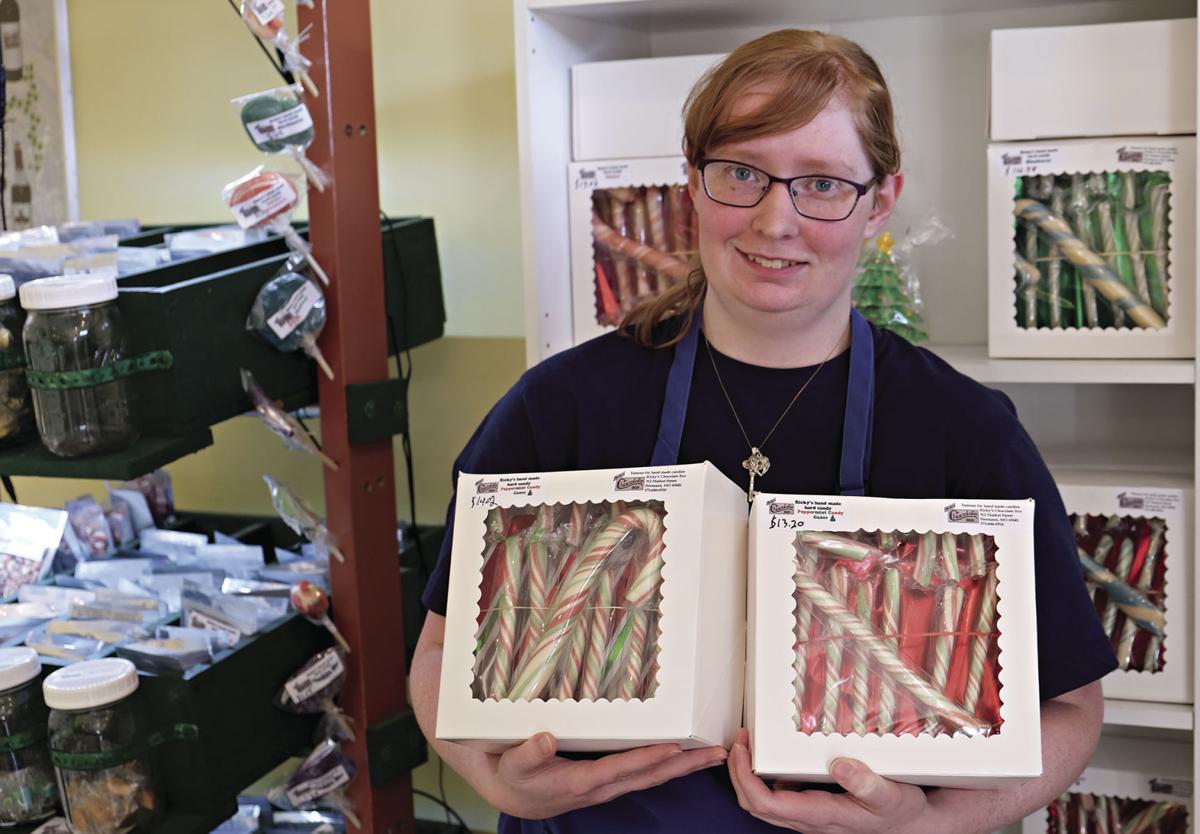 Bring a friend who loves to play, we'll eat all the candy canes”

Those are the lyrics to the song Candy Cane Lane to get A-C readers in the mood to witness some Christmas-time magic over at Ricky’s Chocolate Box. Holding a box of those peppermint striped wonders is Angelina Marquez.

Besides an evergreen tree, a nativity scene or Christmas carols, nothing says “Christmas” like a candy cane. Just a whiff of peppermint and you’re vaulted back to childhood memories of chaotic gift exchanges and falling snow.

James Justus, proprietor of Ricky’s Chocolate Box loves this time of year. It allows him to put his confectionary creativity to work in all its sweet glory. He moved his candy shop next door, in late Sept., where he has more room to dream and produce 214 different kinds of candy, from chocolates to caramels, salt water taffy, toffy, brickel, fudge, lolly pops and his latest—snozzberrys—a chocolate nose mold that hides a green maraschino cherry within a green tropical-flavored melted fondant. What’s it taste like? Willy Wonka said in the film “Charlie and the Chocolate Factory,” his “strawberries taste like strawberries and his snozzberries taste just like snozzberries!”

And while all of that is terribly exciting, it was the candy cane that took center stage in the Chocolate Box candy-making theater with its glassed windows, so patrons can marvel at the pulling of a warm mass of colored sugar loaf to be made into hard peppermint candy canes.

A batch of sugared syrup was heating up towards 310 F on the 500 watt induction cooktop. It’s a mixture of sugar, corn syrup, water and cream of tarter. This latter ingredient prevents the sugar from crystalizing, because the last thing he wants, is a big chunk of hard sugar.

Once it reaches this temperature, it’s poured into a mold to chill to 170 F and he will then add food-grade peppermint oil and the white red and green coloring in different batches, cutting the sugared block into smaller blocks for separate coloring. This is important, because this is how candy canes get their red stripes (and in this case, green as well) in a spiraled-barber shop pole design. It’s about assembling these green, white and red blocks together in one big round log, so that when it is rolled and pulled into a long piece, it resembles a very large diameter baseball bat.

But first, each colored piece needs to be pulled and time is of the essence.

“Pulling on the hook improves the texture and the shine,” James says. “As you pull it, you’re incorporating air pockets in there. That will make it crunchier and give it a lighter color.”

The candy mass starts to become shiny and striated. This particular red chunk of candy starts to take on a pink satiny look and that’s exactly what you want for hard candy, according to James.

He’s working fast before the candy cools and starts to seize up, which is why he and his assistant are working on heated mats. The peppermint oil has volatilized within the hot sugar and fills the air. It’s not unpleasant, though it probably opens the nasal passages of those watching.

He starts fitting his pieces together, but this candy cane has a design twist. Not only is there the obligatory striping that identifies the candy as a candy cane, but there is a Christmas tree in the center that runs the full length of the cane. That calls for some brain-twisting assemblage of colored parts.

Finally he gets the pieces together in one big candy log that will be rolled out, with one end being pulled to get a small diameter—like a tail. James mentally measures a length of about 10-12 in. and cuts the piece off. On a tray, he twists the piece to obtain the spiraling design and forms the crook that makes the straight piece of candy, a “cane.” This batch makes about 25 pounds of candy and he’s happy with result.

James likes candy-making during the Christmas season, due to the variety of special candies the season offers, such as his Christmas cluster. It’s white chocolate, cinnamon and nutmeg, with walnuts, cranberries and candied orange peel. It’s a substantial piece of candy and James gets that from his father, who started the shop in Hermann.

Who wouldn’t want one of those cookies? That and a snozzberry.

“Snozzberry?!” “Who ever heard of a snozzberry?!” asked badly behaved Veruca Salt, the brat character in “Charlie and the Chocolate Factory.

Mr. Wonka grabs her jaw firmly and looking her squarely in her shocked eyes, said, “We are the music makers, and we are the dreamers of dreams.”

James might agree with that. He’s already dreaming of marshmallow snowmen dipped in white chocolate, with milk chocolate clay arms, a hat and scarf.