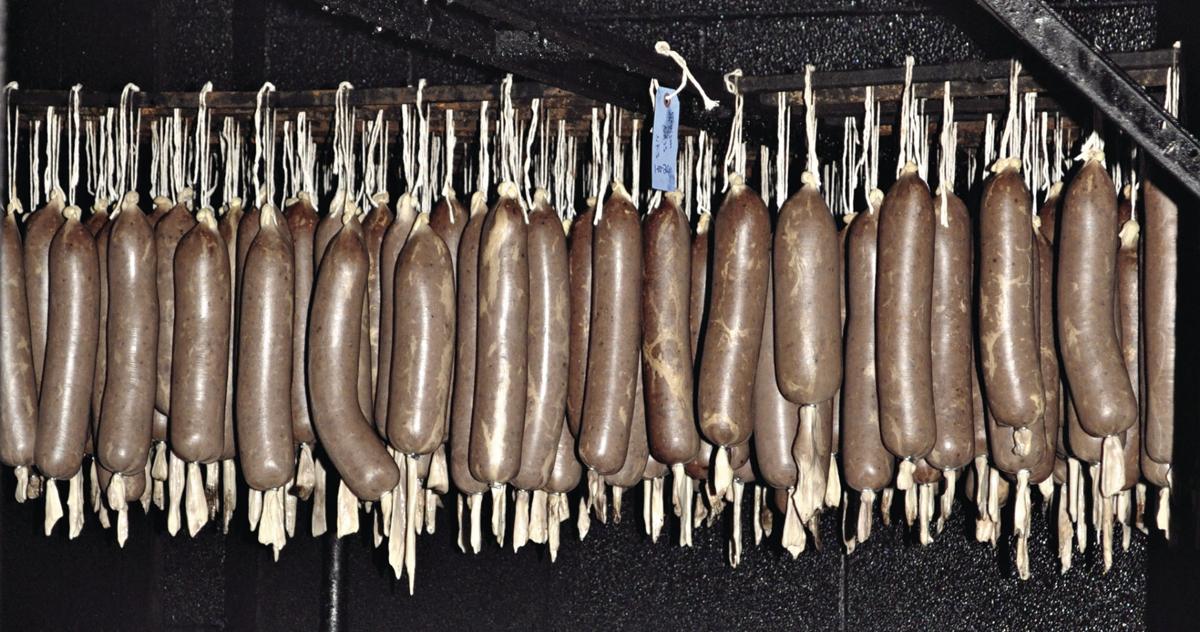 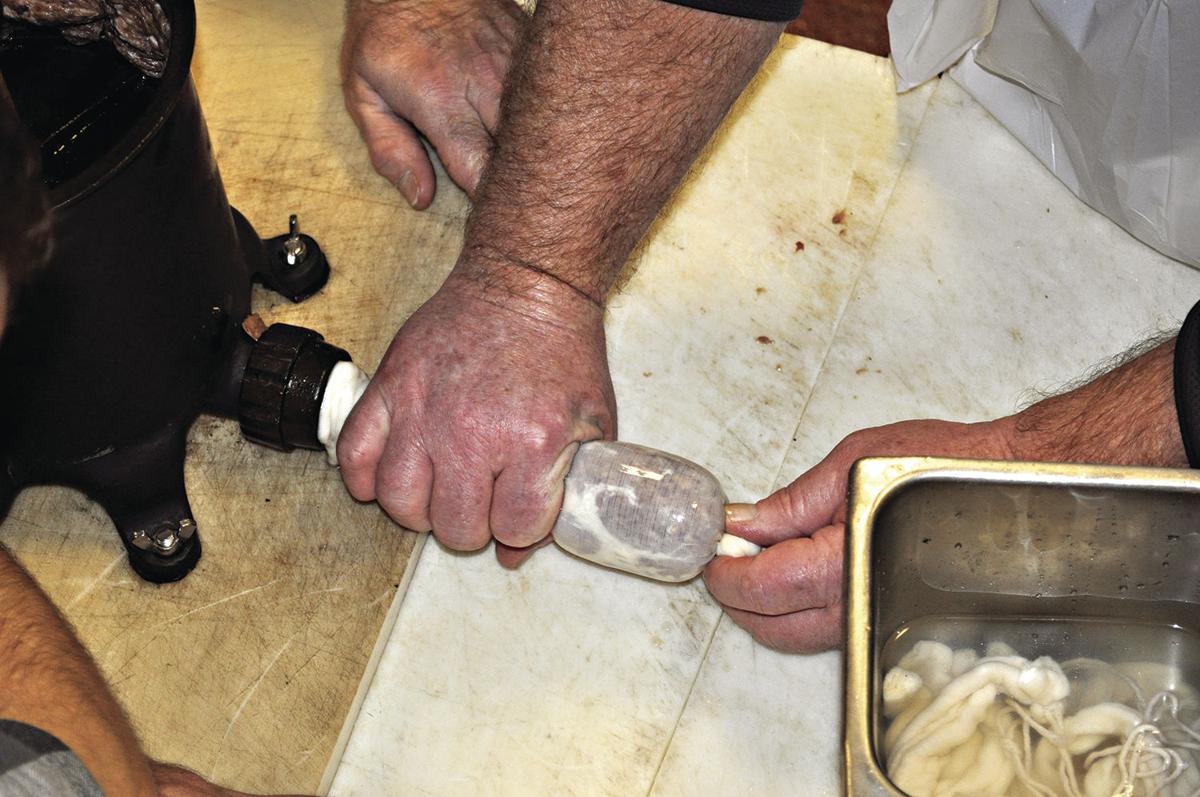 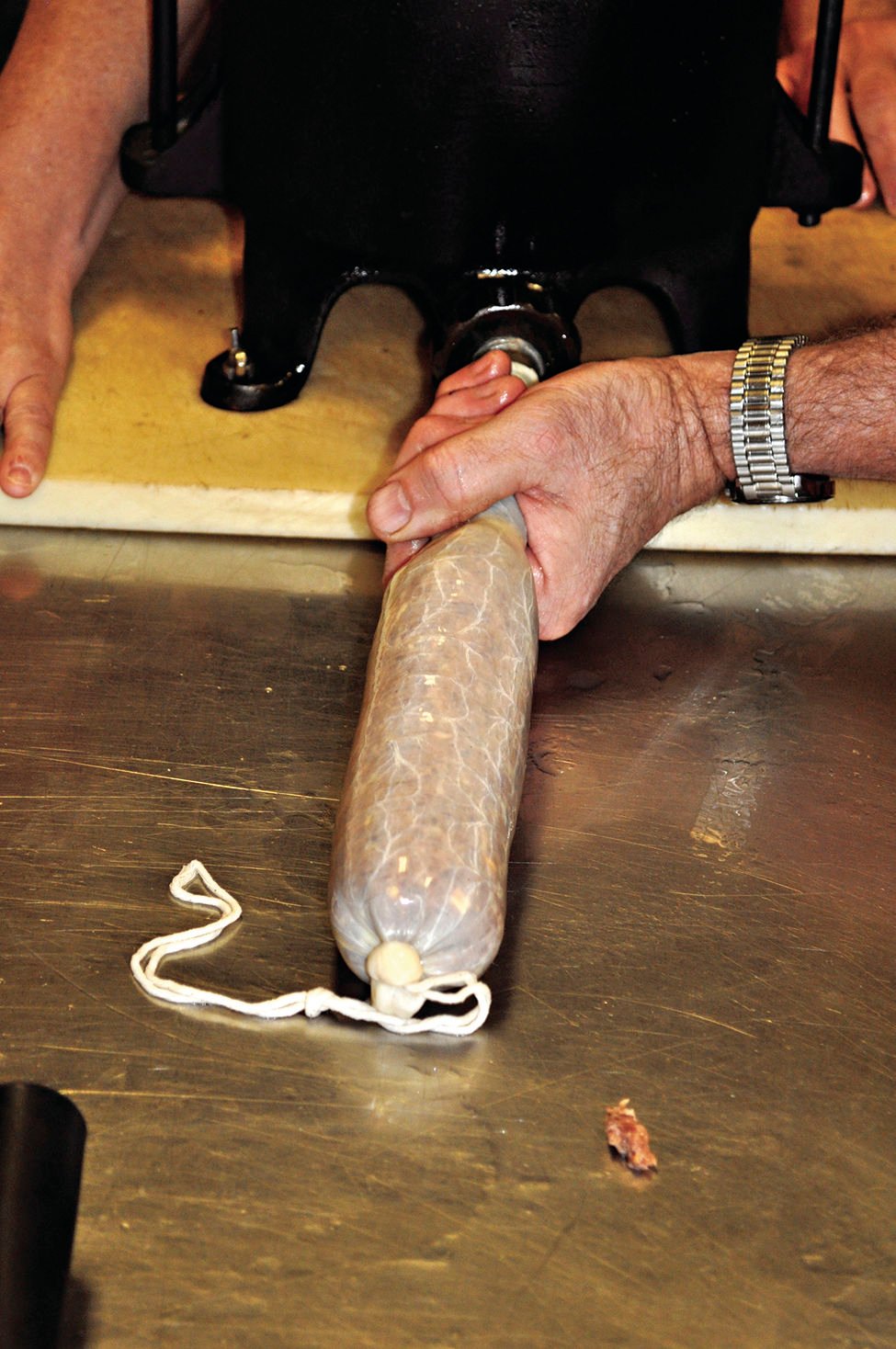 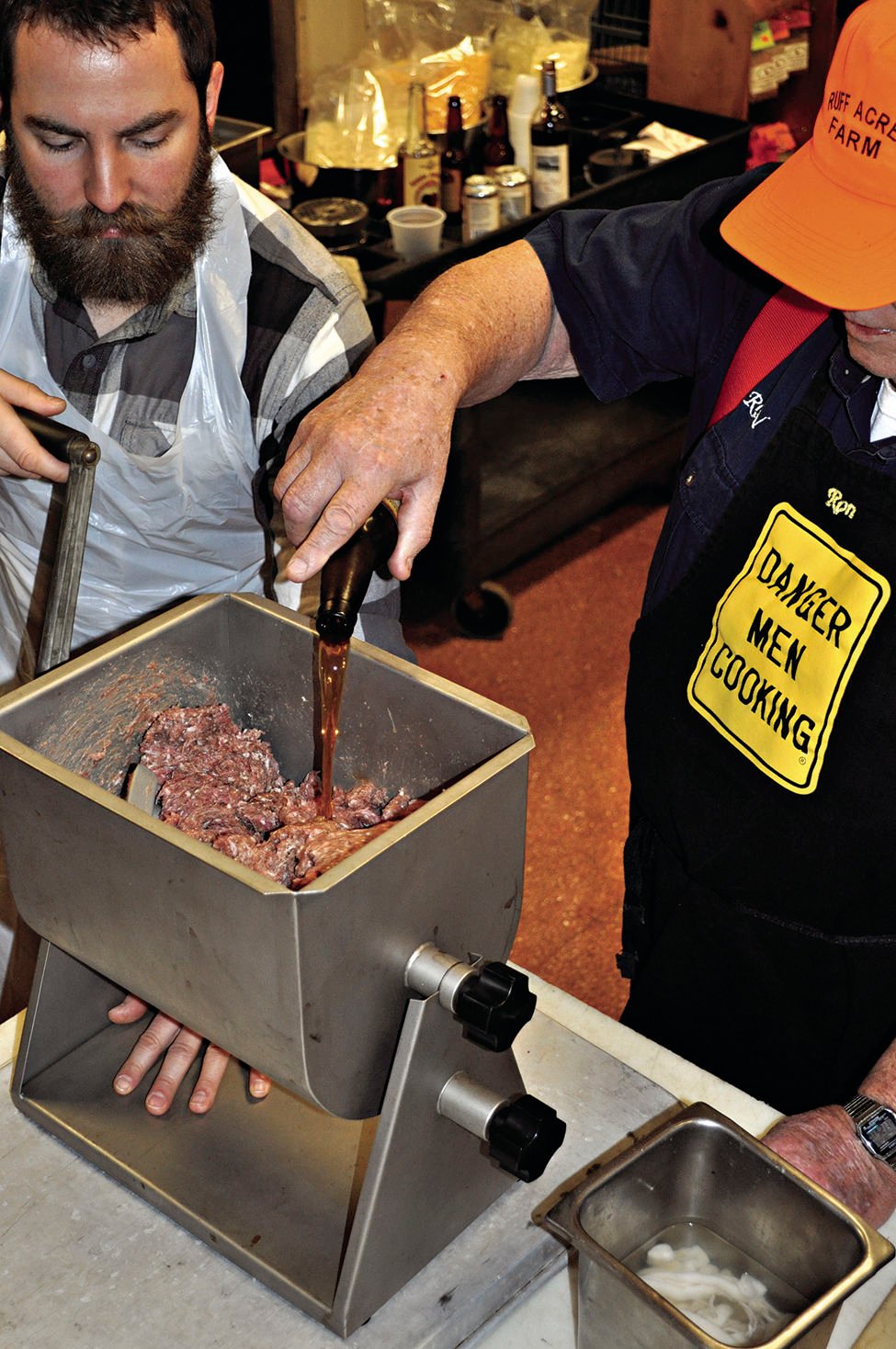 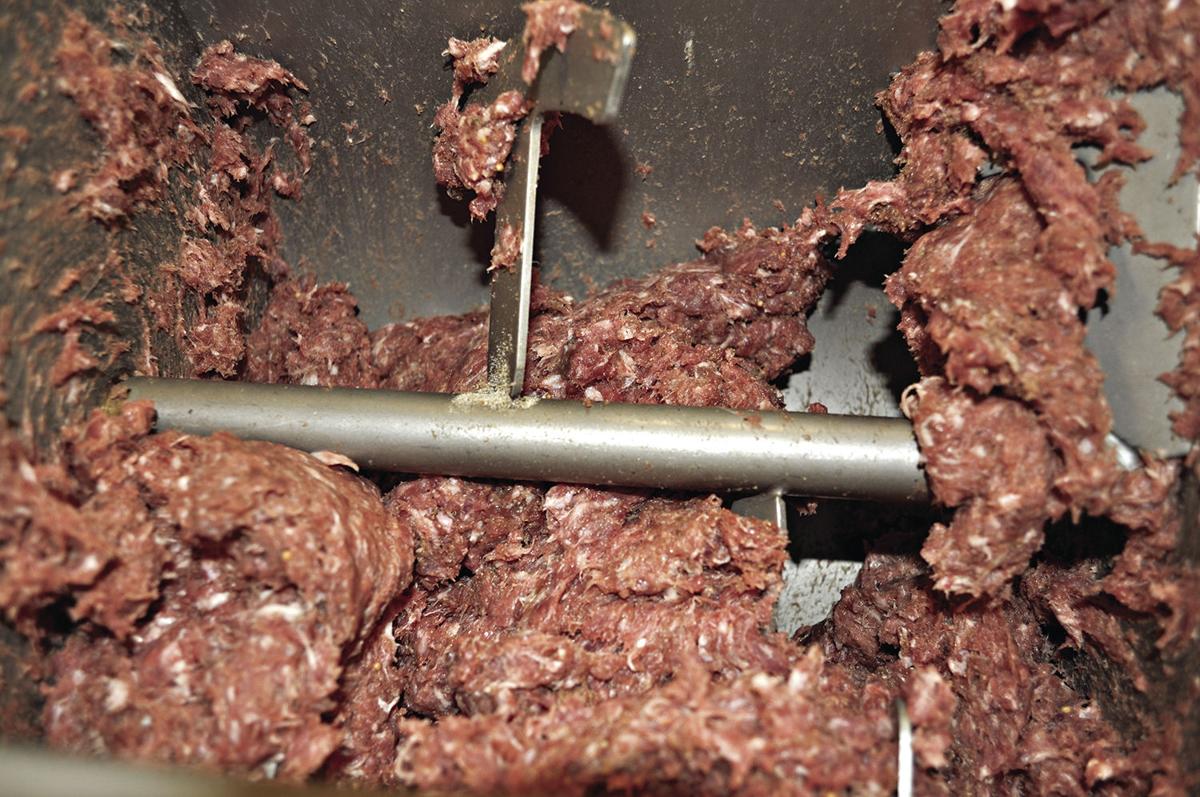 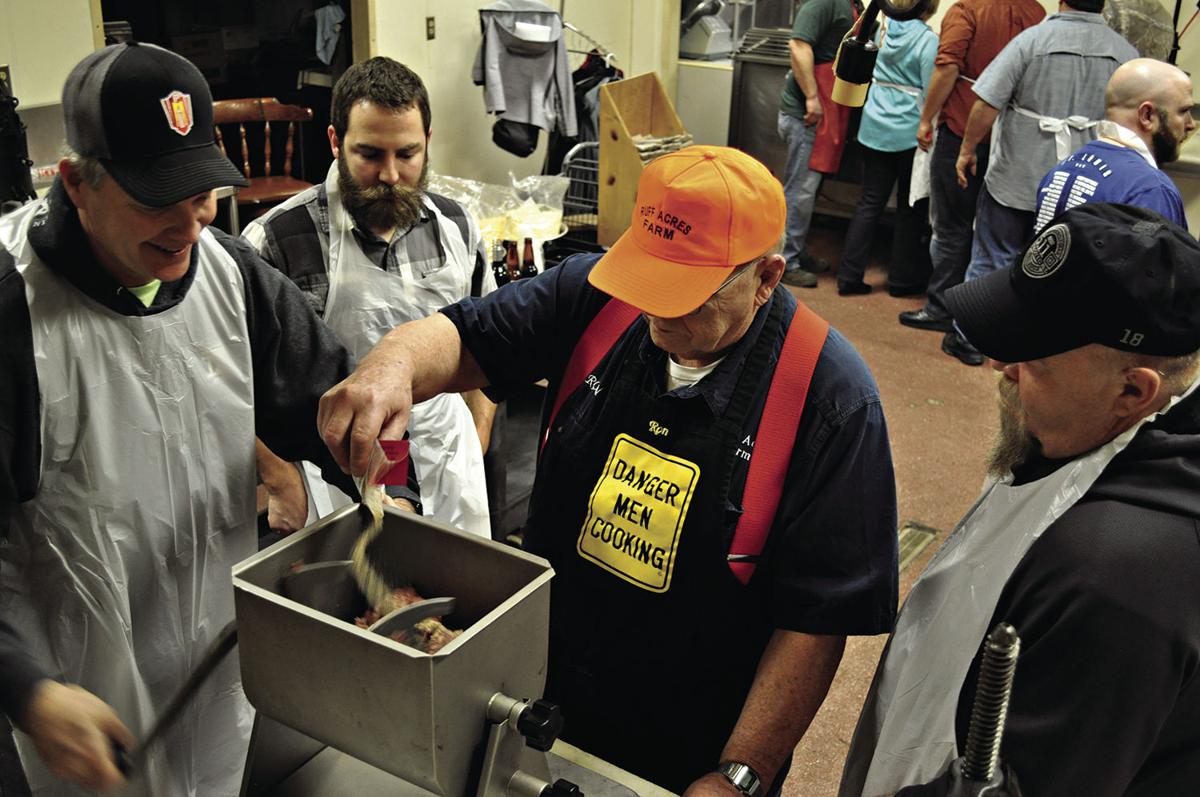 It was an enthusiastic group of students that braved some nasty weather last Saturday to attend a summer sausage making class at the Hermann Wurst Haus. Many of the students said they were in the class to improve their sausage-making, hinting at failures in the smokehouse.

Teachers Mike Sloan and Ron Leibach had the pork and venison pre-ground and the flavor and spice choices displayed on the stainless steel table so the class could focus on “the process” of making summer sausage. One false move during any part of the process and chances are, if the sausage wasn’t fit to eat, it wouldn’t resemble anything you’d want to eat.

Summer sausage is a product of fermentation and slow drying. Fermentation keeps the sausage meat and fat from spoiling. Outside of a controlled environment, that roll of sausage is at the mercy of air temp and humidity, which directly affects the rate and thoroughness of fermentation. Making dry sausages also involves curing salts, which contain sodium nitrite and sodium nitrate, a necessary precaution against Botulism (deadly Clostridium bacteria) when making sausage.

The students would be taught sausage making in the German tradition, meaning the sausage would be semi-dry, having a finely ground meat particle size, a “moderate” sausage diameter and a tangy flavor, which means it has an acidic pH. The tangy flavor in the sausage is natural lactic acid, produced when sugars are broken down by bacteria, lowering the pH in the process, so there is an acidic fermentation process that leads to shelf stability—important before the days of refrigeration.

Mike says traditionally, sugar has been used to start the fermentation process, along with some friendly bacteria that was present on knives, cutting boards and grinders, but sausage makers can purchase commercial fermentation starters such as a mix of Lactobacillus sakei and Staphylococcus carnosus.

Relying on the traditional fermentation process is effective about 90 percent of the time, said the voice of experience.

The sausage made in this class was a mixture of one-half pork (pork shoulders and butts) and one-half venison. The meat to fat ratio should be around 70 percent meat to 30 percent fat.

“You can make summer sausage out of just about any type of meat, but I wouldn’t suggest poultry, ducks or geese, because they have a lot more moisture in the meat,” said Mike. “Since we’re trying to dry our sausage, the longer it takes moisture to leave the meat, the chances are increased for things to happen to that meat. Moisture is a carrier of bacteria, and though we want bacteria, we don’t want the bad bacteria.”

Summer sausage is as much about texture as it is about taste, and the finer grind allows for better protein extraction (see below). Grind your meat through a 1/2” to 3/8” plate and put it back on a tray and place in the freezer to keep the meat chilled after the first grinding process, which heats up the meat temperature—something you don’t want. Chilled meat, between 28-33 degrees allows the grinder to achieve the small particle size  you want for making sausage. Bring it back out of the freezer and grind again through a smaller plate (5/32” - 1/8”).

“I like the two-grind system because it makes a better [meat] particle definition,” said Mike.

Once the meat is ground, it will be put into a mixer with a liquid, spices and flavorings.

The reason you add a liquid is that it helps disperse the seasoning and helps with mixing the meat, cure and spices for uniformity throughout, so each sausage has consistent ingredients. It also aids with “protein extraction,” the breakdown of protein that forms a glue to hold thousands of tiny meat particles together.

“You want to be able to slice your sausage and not have those slices crumble,” said Mike.

“Most people use water, but you should use ice water. Water out of the tap is 42 degrees, which is too warm—you need to keep your meat cold.”

The class of 10 was divided into three groups and all of them chose beer for their liquid, though whiskey and wine was on hand, as well. The amount of liquid to use is about three percent of the meat weight.

Mike demonstrated the result of the right amount of liquid added to the meat in the grinder. He pulled some meat from the grinder, made a little ball, smashed it on the palm of his hand and turned his hand palm down—the meat stuck to his hand without falling off.

Spice packets included the curing salts and usually some mixture of garlic, peppers and other spices such as cumin. One group added cheese cut into small pieces, but this was high temperature cheese that wouldn’t melt under smoking or cooking. Mike says you can find high temperature cheese at a butcher shop. One group also added dried jalapeno peppers. Protein extraction binds the additives in the sausage, so when it is sliced, the sausage and its contents hold together.

The three groups used prepared (“cut and tied”) natural beef intestine (called “beef middles”) for casing their sausages. The untied end is slid over the snout of the filler machine. As the meat is pressed down from above, it moves through the snout and into the casing. The trick is to not press the meat down too quickly while filling or you run the risk of bursting a casing. With the natural casings, as it gets close to filling the intestine too tightly, you will see white striations appearing on the casing (stretch marks), which means you have a filled sausage. Forcing more meat will burst the side of the casing. Twist the casing to keep out air on the end and tie two half-hitches with string to finish.

Summer sausage needs to be hung up so the casing can dry, which may take up to a week. Mike recommends hanging in a place where the temperature is 50 degrees or less, but not below freezing.

“Once the casing is dry, it will take the smoke,” said Mike.

Summer sausage doesn’t have to be smoked, but it acts as a preservative and imparts a flavor that people like. Regardless, the sausage takes about 39 days to “season,” before it can be eaten.

“You want it to dry very evenly,” said Mike, “or you get a condition known as “case hardening.”

Hot smoking refers to the process of smoking a sausage, then cooking the sausage to an internal temp of 152 degrees for immediate consumption or freezing. Cook above 152 degrees and you’re in danger of the fat rendering in the casing.

Mike and Ron will both say making summer sausage is an art because there are many variables that may be out of the sausage-maker’s control. It is the challenge, however, and the tasty finished product, that will keep the tradition and the art alive for centuries to come.