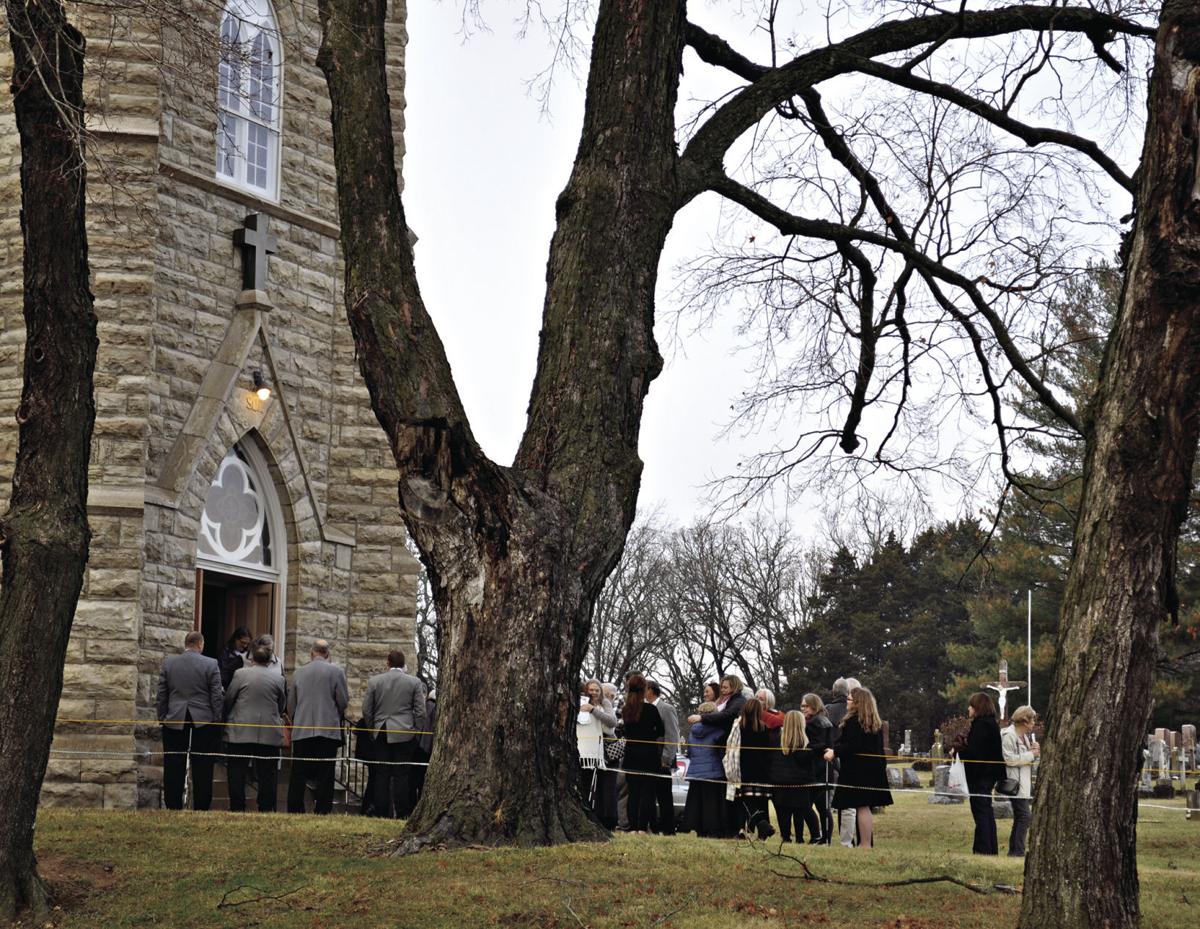 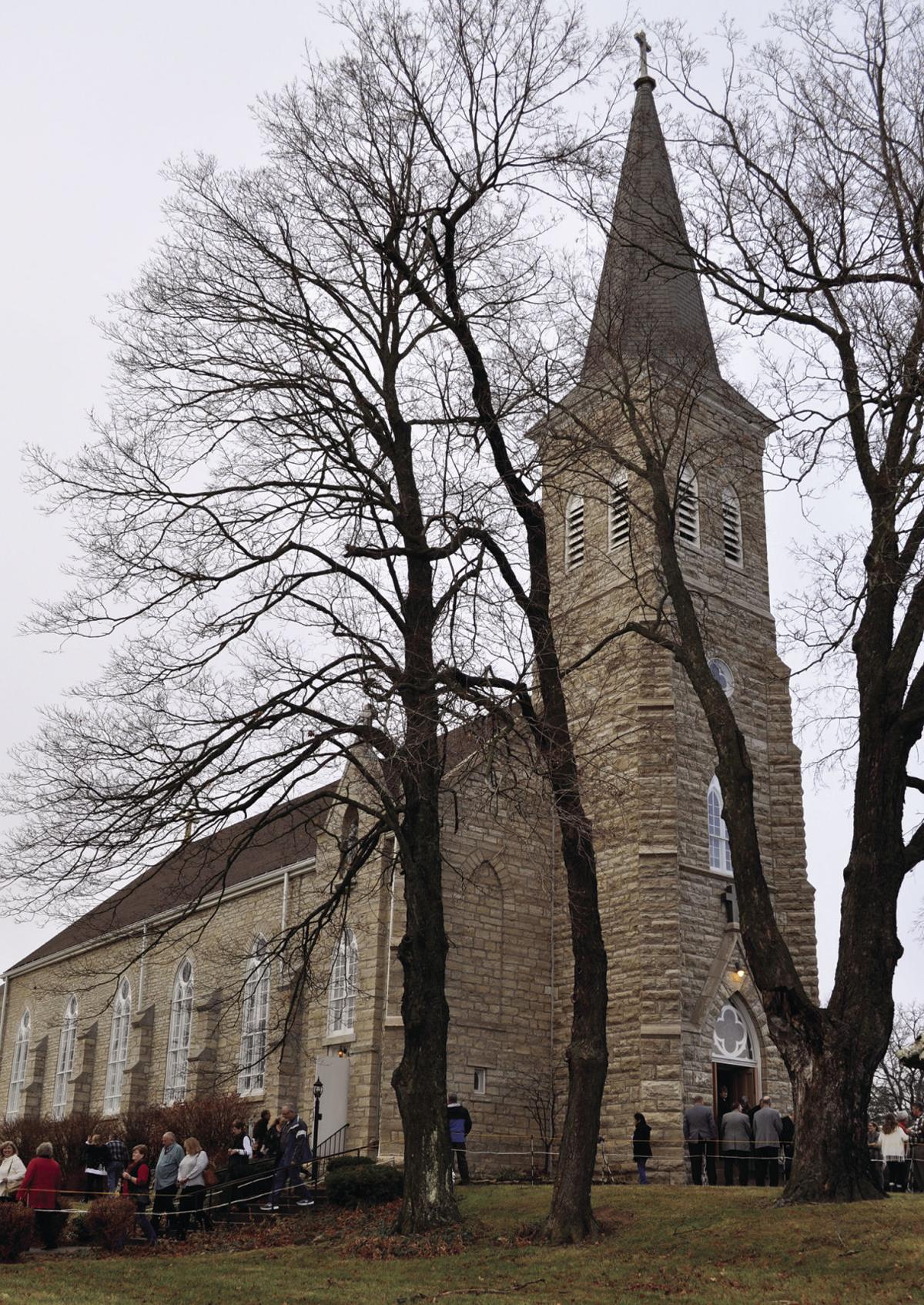 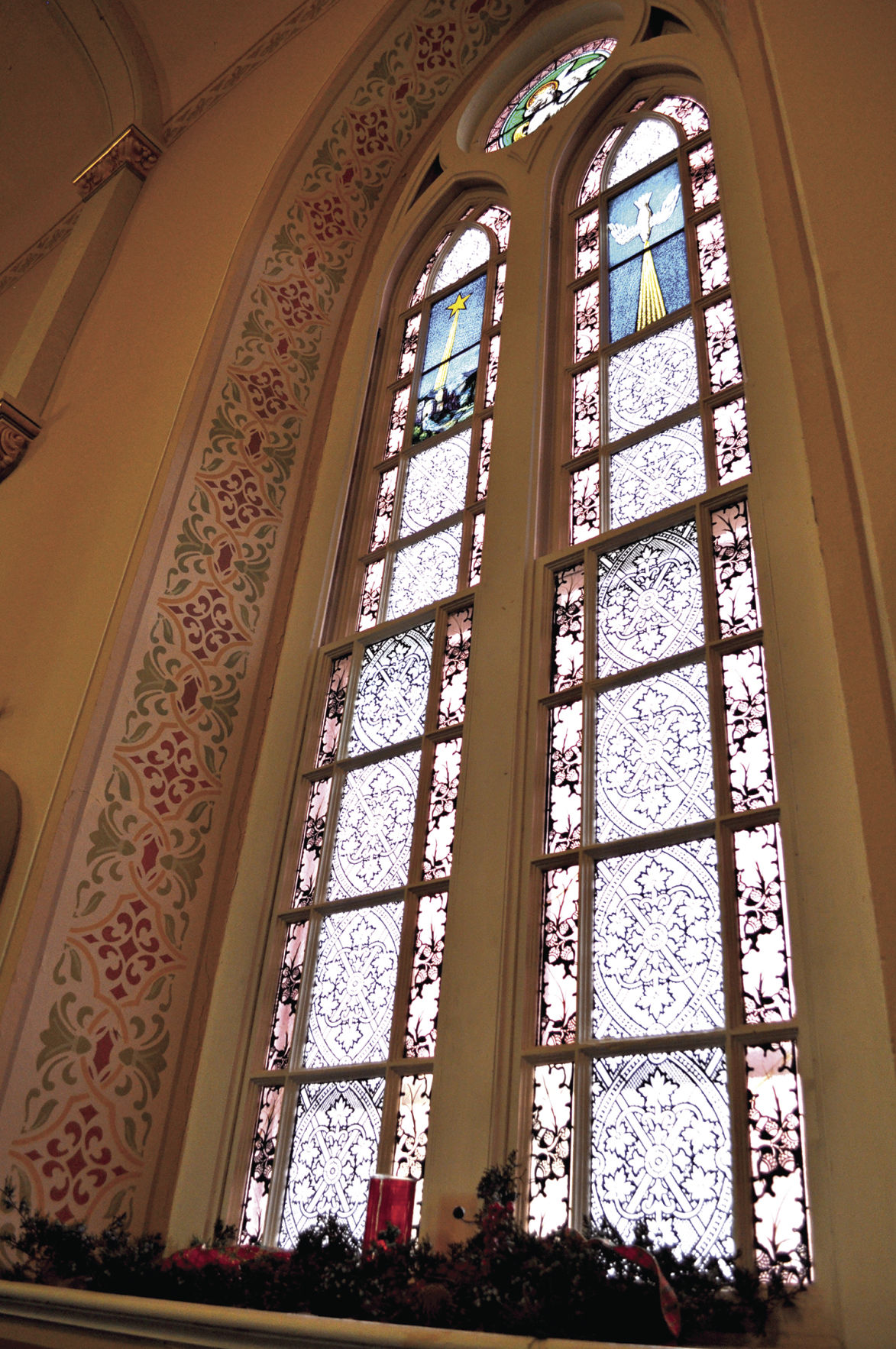 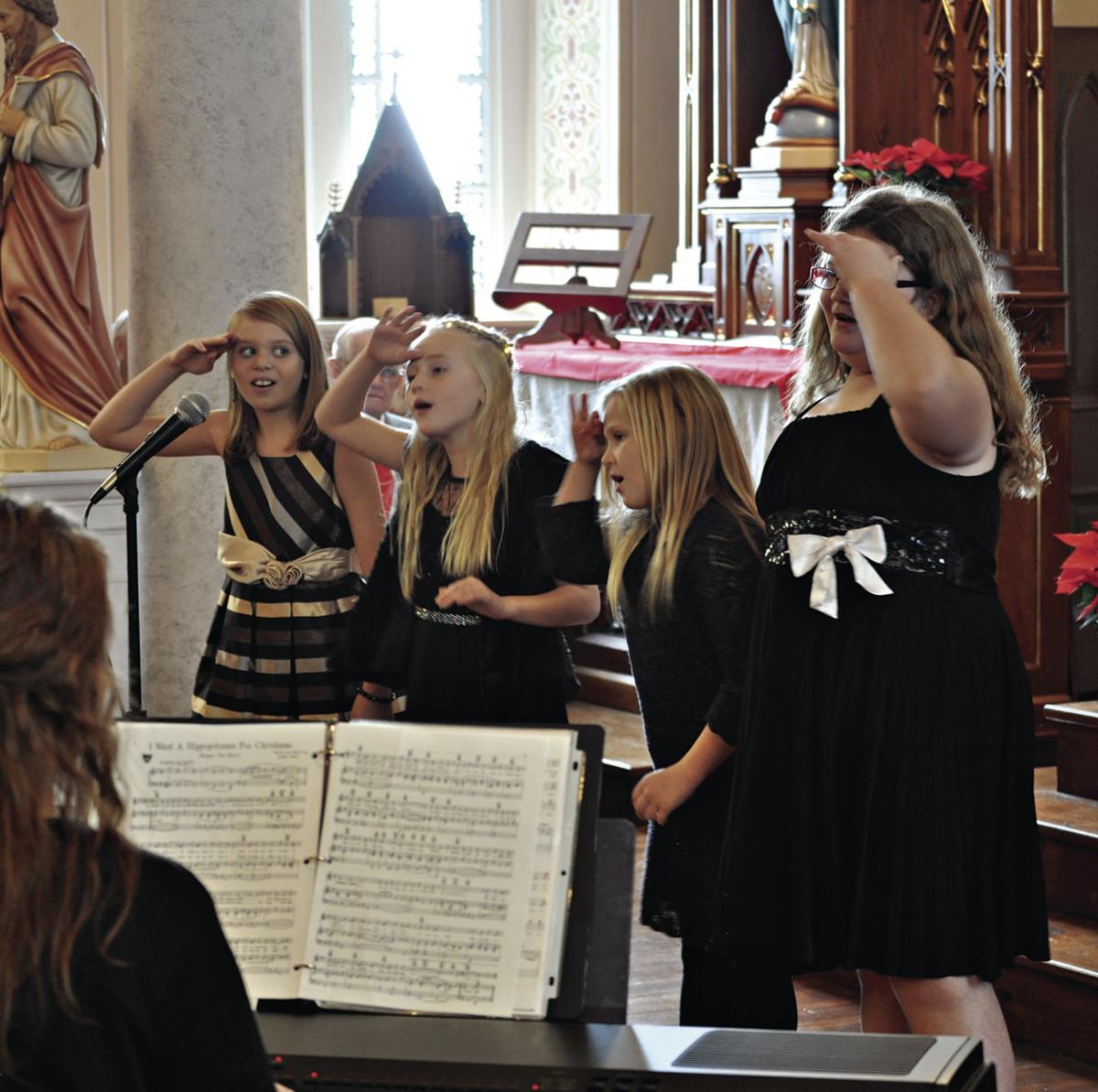 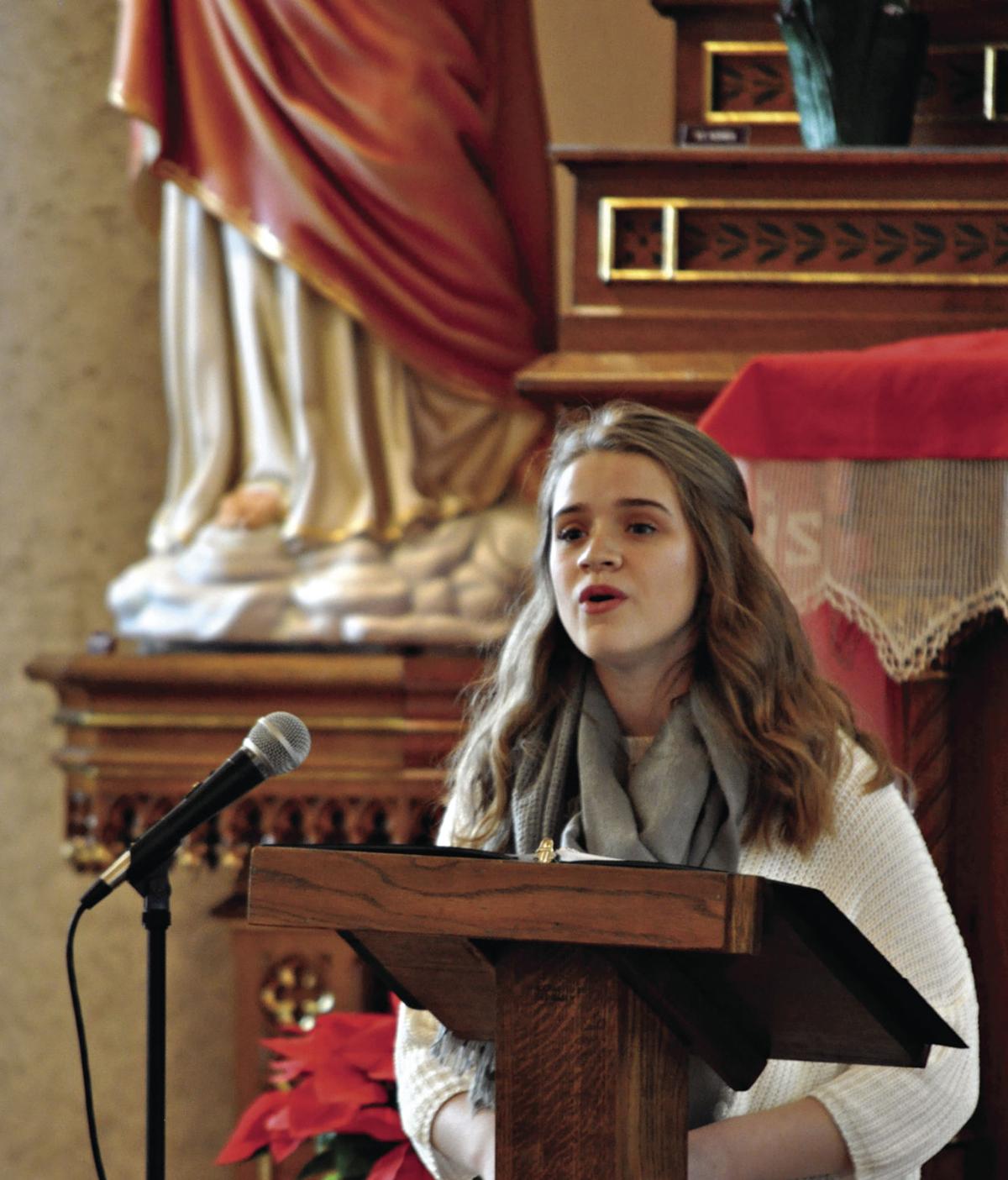 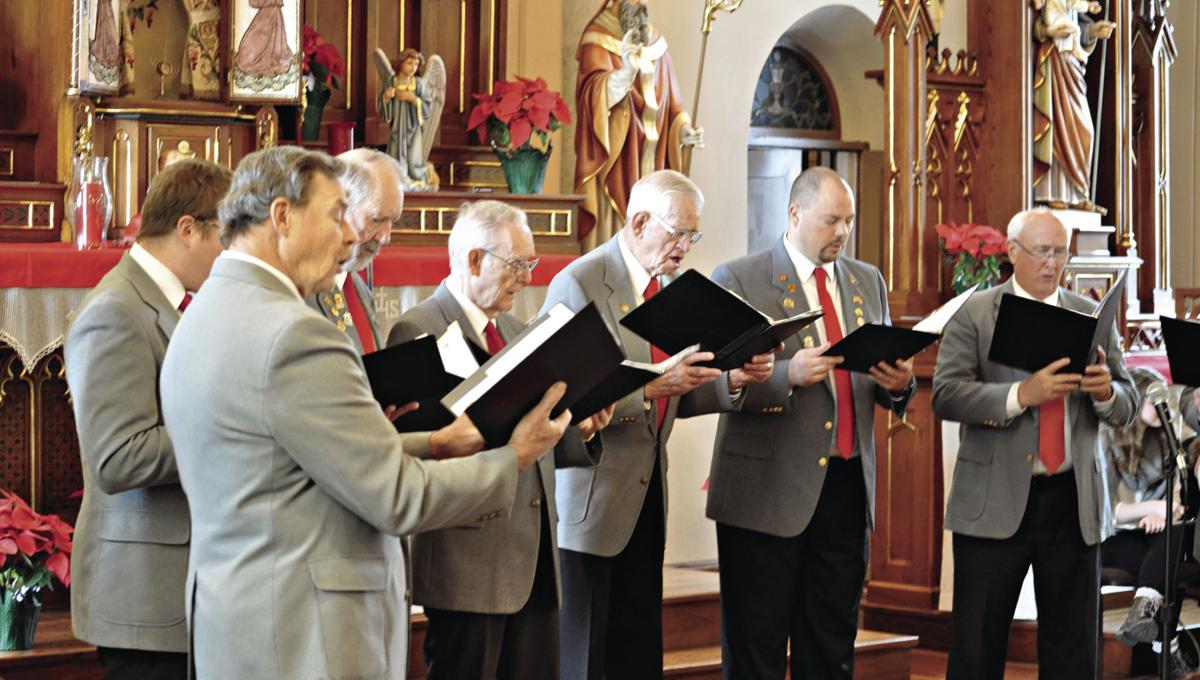 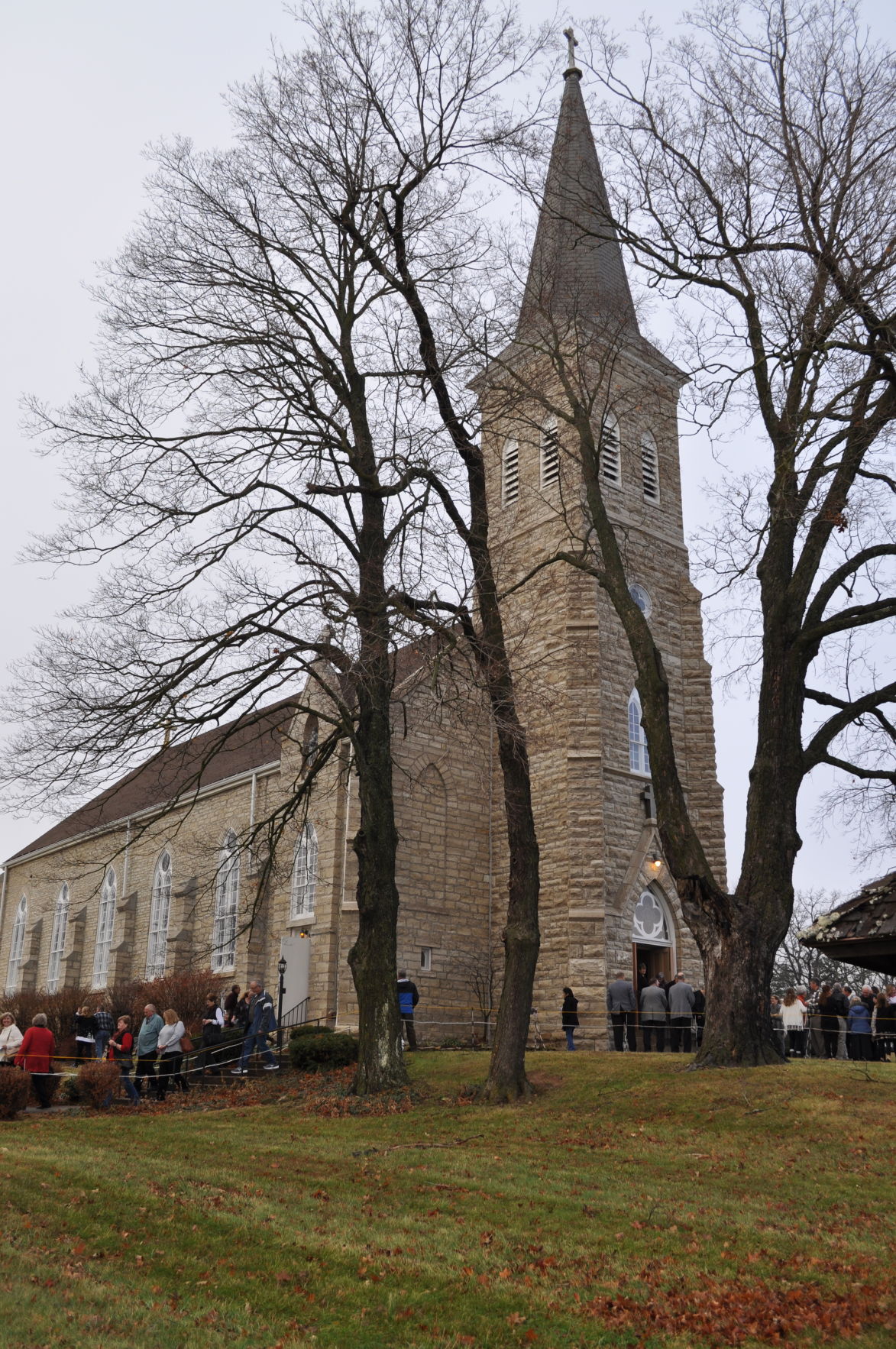 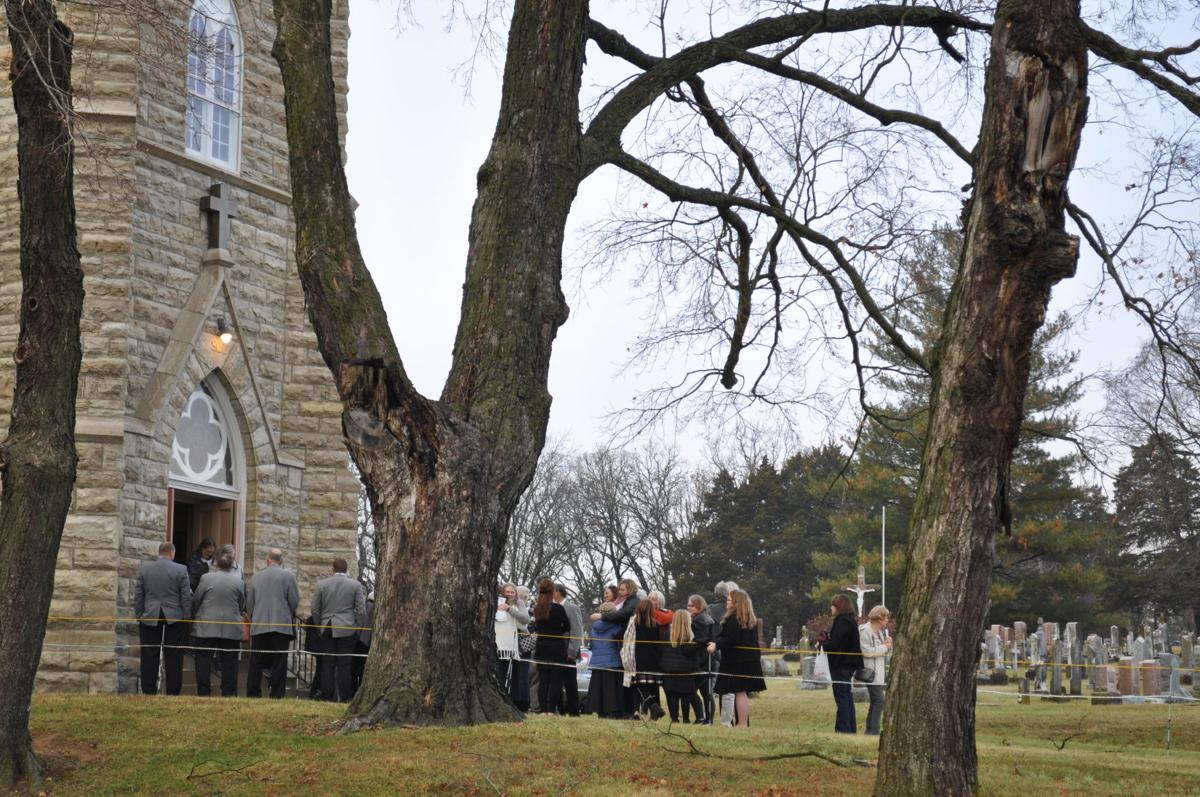 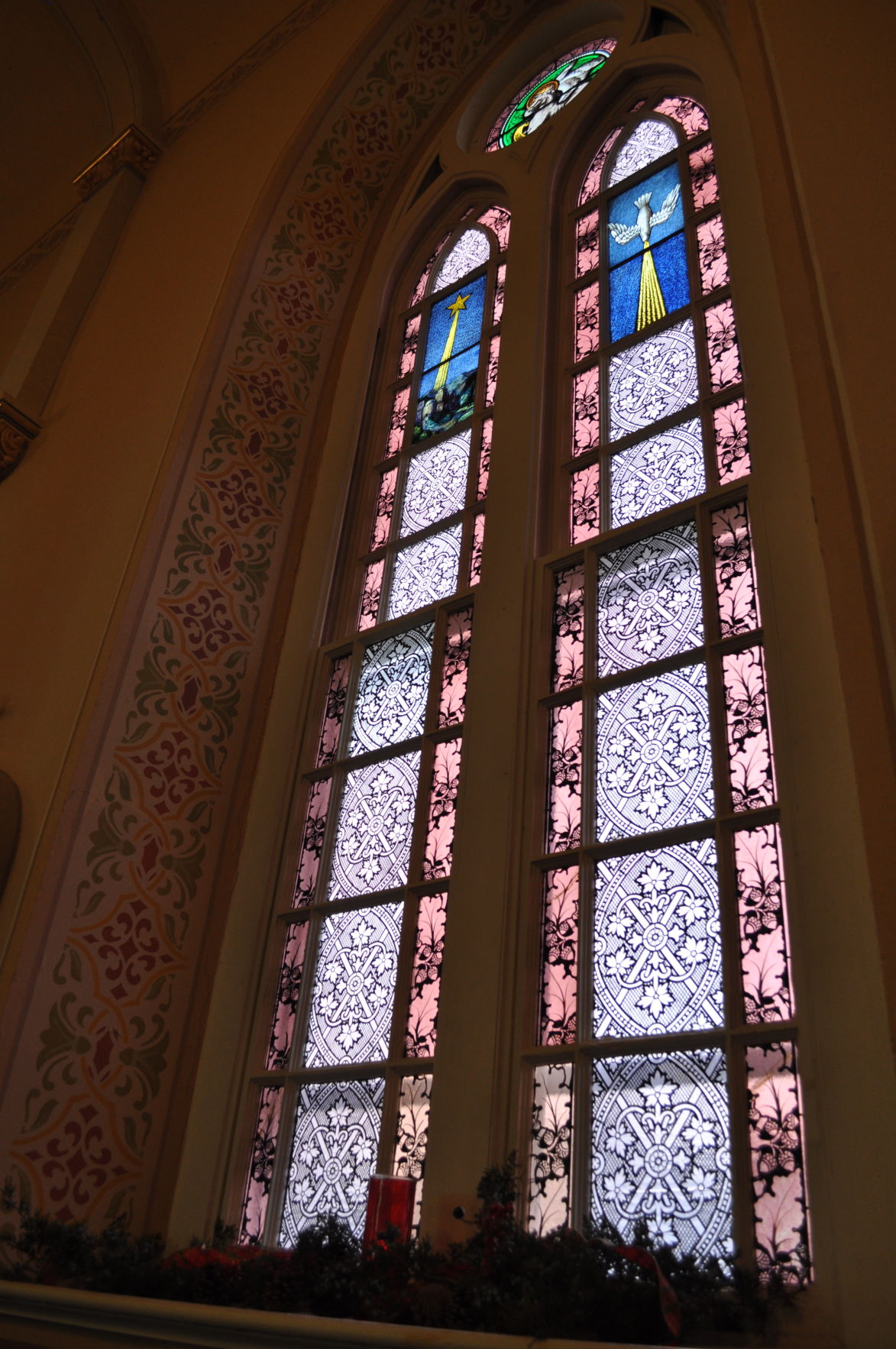 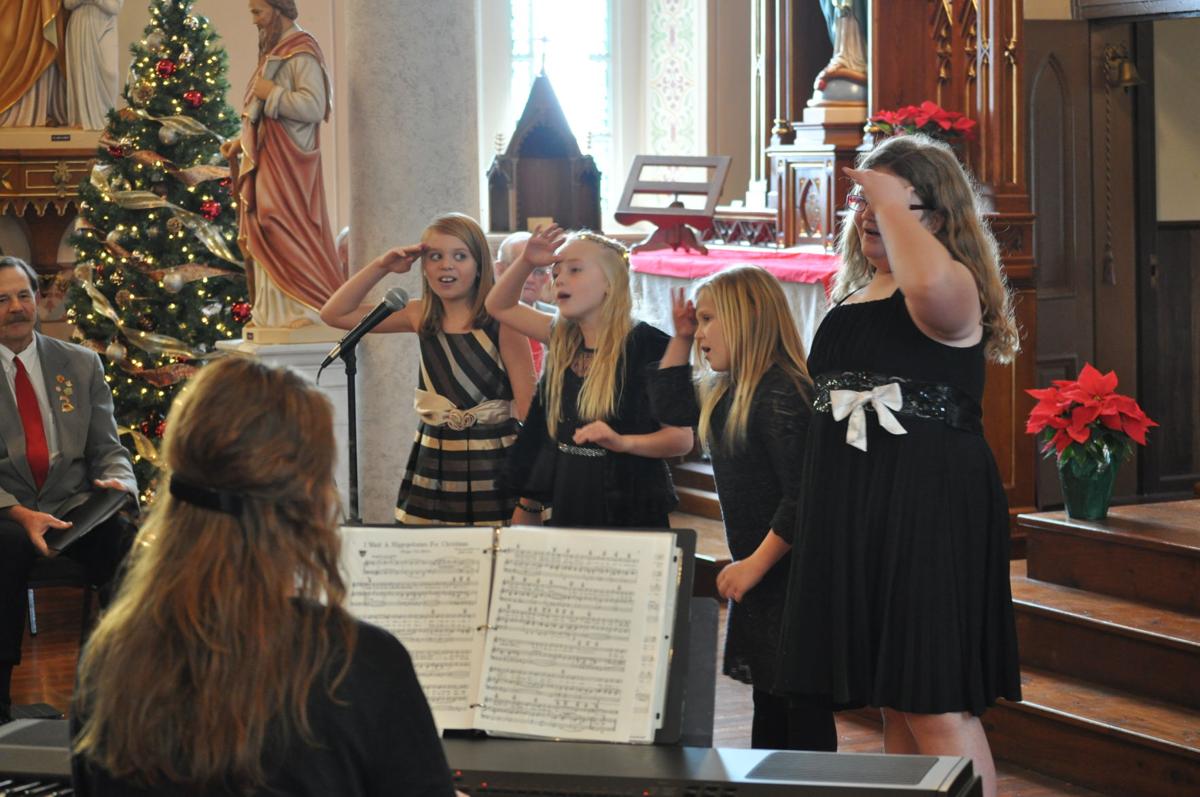 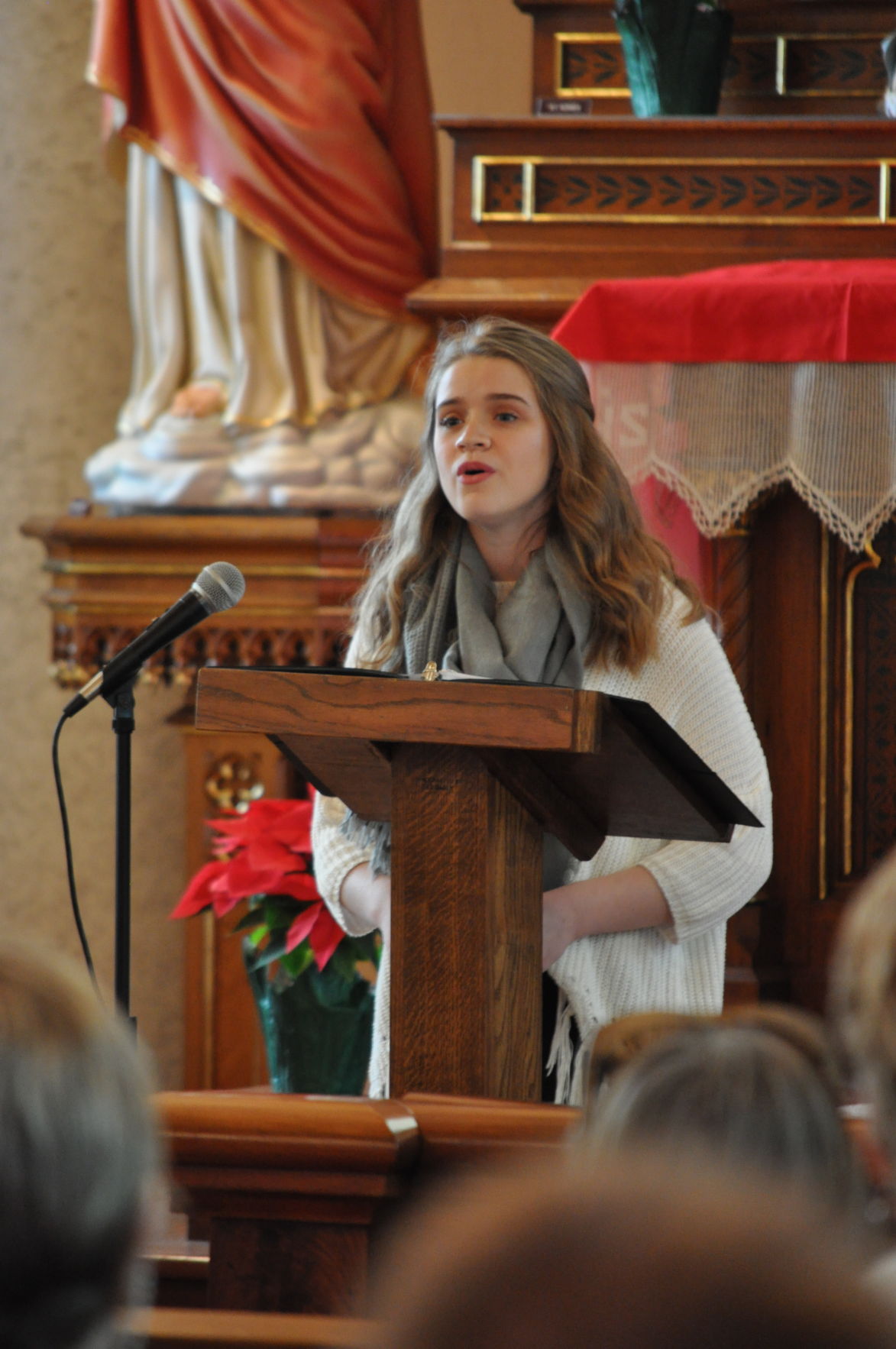 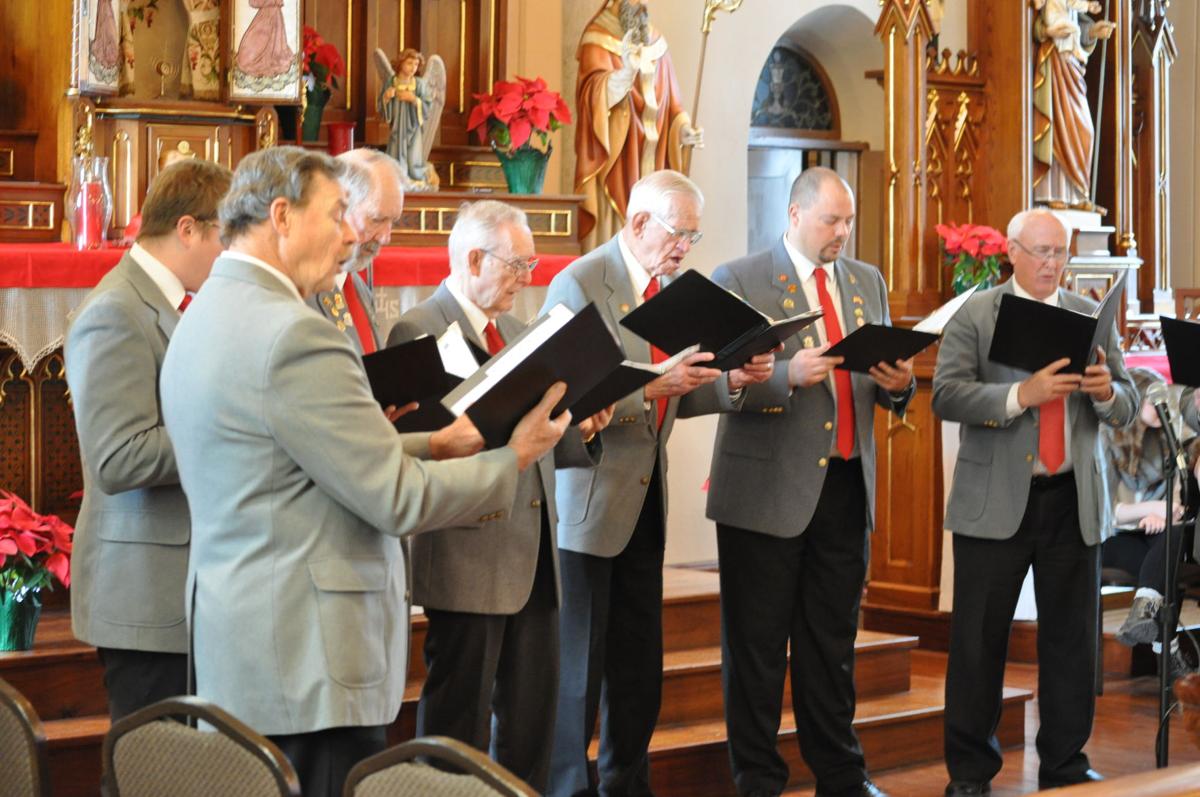 They were right. The organizers of “The Sounds of Starkenburg” said this performance is a great way to start the Christmas season, which revolves around the birth of Christ, family, friends, and giving and receiving. This performance was a beautiful gift to Hermann, Rhineland, surrounding communities and visitors alike for all that were fortunate to witness it. “The Sounds” encompassed Christmas itself with the miracle of Christ’s birth to a child’s wants such as “cream-colored ponies and crisp apple strudels, doorbells and sleigh bells and schnitzel with noodles . . .” and all of it wrapped up like a blue and silver package with a red bow, representing hope, joy and a sense that there is something magical awaiting.

He prayed, “Close the door of hate and fear and open the door of love all over the world.” “Let kindness come with every gift and good and sincere tidings with every greeting. Teach us to be merry, with clear and grateful hearts.”

When eyes opened with heads raised, organist Barry Bierwirth began playing variations of the seasonal hymn, “Hark! The Herald Angels Sing, which started out with a Bach-like baroque melody and counter melody that grew more full, complex and uplifting as the variations segued into successive versions.

It was a time to take in the rich art and architecture of St. Martin’s Church, a beautiful stone church built in the 1870s with an addition and tower constructed in the 1890s. Diffused pale yellow light more reminiscent of December’s chill emanated through the tall, Celtic stenciled stained-glass windows, as the “Hark! the herald angels sing, Glory to the new-born King!” melody prepared the audience for a triumphant magnificence to follow.

This musical interlude was the introduction to the powerful gift of Carrie Tilly’s soprano vocal performance of the Italian Christmas Carol “Gesu Bambino,” composed by Pietro Yon in 1917. The German builders knew what they were doing. The St. Martin’s church was made for a voice as fine as Ms. Tilly’s, as her elevated pitch reverberated into perfect sine waves that traveled down the church nave until it enveloped the whole sanctuary with a sweet resonance that must sound like the angels.

Grown Up Christmas List was written by David Foster in the 90’s and since performed by many pop artists. It’s also a song arranged in the style of musicals such as “Beauty and the Beast,” with emotional chord changes to minor notes—perfect for a cello’s solemn deep resonance, to draw out mournful melodies that are a  mark of the cello played by Keely Uthlaut. The song selection is honest and a perfect foil to a family-oriented glorious, joyous season—the loneliness of winter’s sparse and chilled landscape for those without loved ones, and a longing for human connection in a world of loss. Ms. Uthlaut knows why she plays this bowed instrument and she does it well, bringing the song’s lyrics to life as an instrumental to be felt in the bones.

I'm not a child

But my heart still can dream

That wars would never start

And time would heal all hearts

Every man would have a friend

That right would always win

And love would never end

This instrumental was followed by Kampbell Hemeyer, whose alto-side of her voice is getting more rich with time, singing “Have Yourself a Merry Little Christmas.” Again, here’s a song about hope, the central theme of Christ’s coming, in the present—possibly with the angst of youth faced with life’s changes—when there is longing and nostalgia for happier times without the unpredictability of life.

Have yourself a merry little Christmas

Let your heart be light

From now on your troubles will be out of sight

“The Sounds” has a curated production that include all ages for a reason. Christmas comes around once a year and is celebrated, and therefore experienced through a lifetime, from the sugarplum fairies, lights and cookies of a child to the deepening relationship and dependency of one with Christ. Childlike wonder and excitement were food for the soul to the older visitors as they witnessed the St. George Kinderchor sing “Hippopotamus for Christmas” with all the pantomime movements to tell the story of wanting a . . . well . . . hippopotamus for Christmas! These four young singers sounded at times like an army of 20.

Wading into unsure lyrics on “Song of Mary,” with a little help, they found sure footing and crescendoed loudly as one, as they got into familiar vocal territory, much to the delight of the audience.

Visitors to the performance were also an important part of the program joining in on a sing-along, for Christmas carols and popular holiday music such as “I’ll Be Home for Christmas” and “White Christmas.”

Barry Bierwirth returned again this year to play the 1858 St. Louis-built Pfeffer pipe organ and he controlled the instrument with finesse and skill on such arrangements as Ding! Dong! Merrily on High and Fum, Fum, Fum. This latter tune was pure baroque fun, that at times, could almost pass for a circus calliope.

Carrie Tilly once again, locked her etherial soprano voice into the nave arches above, with the strains of “O Holy Night,” where a statue of a crucified Jesus stared down. Listening to the pure voice of Ms. Tilly while focused on the Crucifix scene would easily make believers out of the hardest cynics among us.

Backed by Mr. Bierwirth’s organ and Ms. Uthlaut’s cello, this became not only a beautiful rendition of a popular Christmas carol, but a Song for the Ages. She also closed out the program with “God Bless Us Everyone” to a standing ovation—a sign that Christmas came early this year to Starkenburg’s little valley in the way of what has now become a wonderful tradition. The hills were truly alive with The Sounds of Starkenburg.