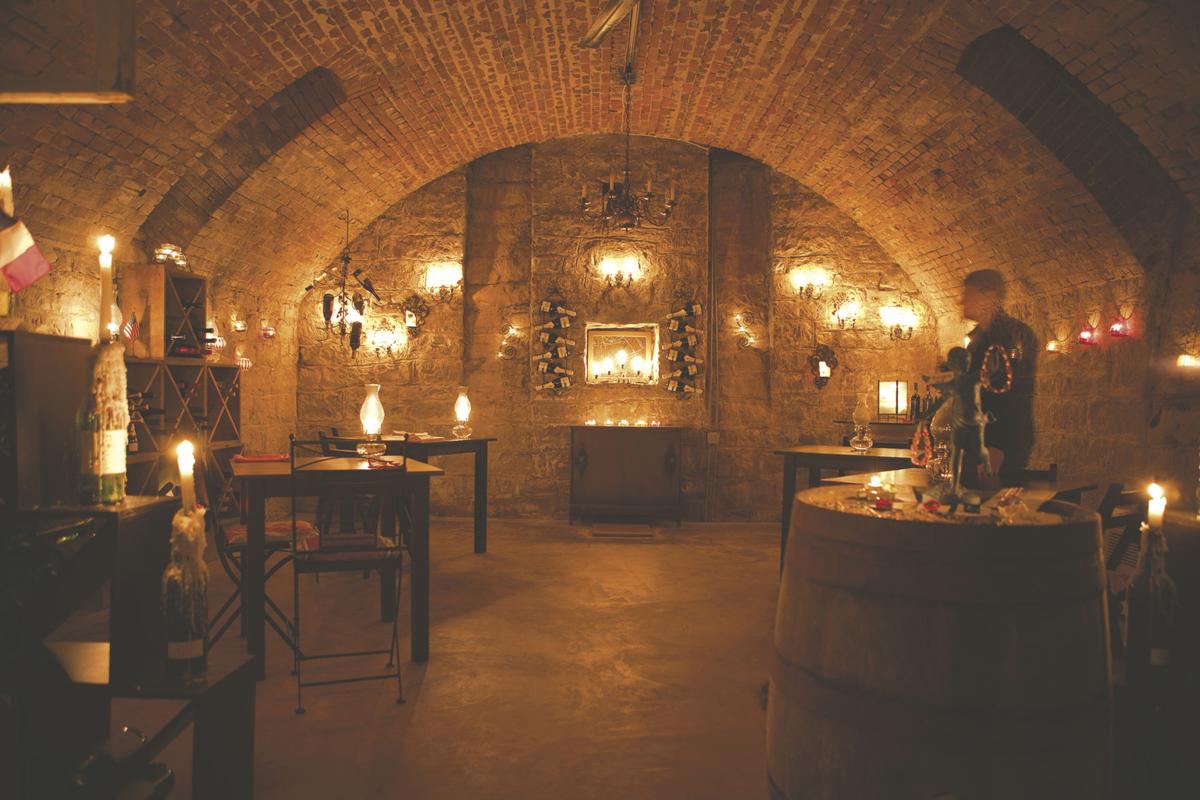 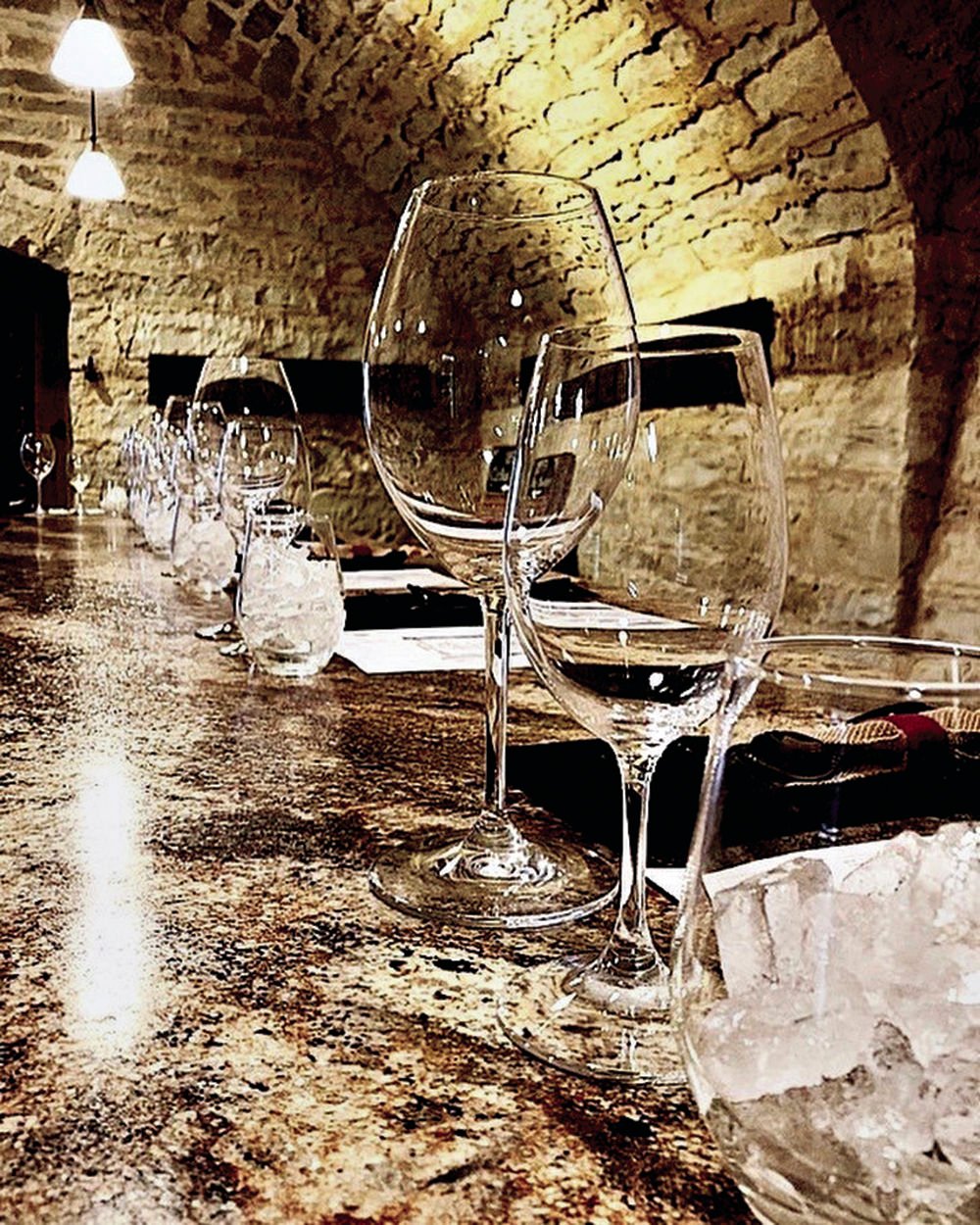 Because of Hermann's wine making heritage, it was not unusual to construct cellars to hold bottles of wine for longevity, whether it be at a winery property or a residence. Winemakers knew that to store wine correctly, there must be no light, no heat and no moisture. Some humidity was permitted, but too dry an environment would shrink a cork, evaporate the wine and lead to an oxidized taste. Hermann's cellars are part of a heritage that makes this town and others of German descent along the Missouri River corridor so special. Of late, they also just happen to make an intimate old-world setting for social gatherings and dining experiences. Who needs to jet off to Europe to show a Valentine’s Day sweetheart an evening they won’t soon forget?

Adam Puchta Winery's Be "Wine" Valentine dinner is sold out for this Valentine's Day weekend, (though there were some openings for the Sunday dinner) so the imagination will have to do. This is a sit-down four-course wine pairing dinner for 18 people in their candle-lit limestone wine cellar, now known as the 1855 Cellar Bistro. Lee Baker, spokesperson for the winery said this cellar is unique because most wine makers in the area used brick as a construction material for their cellars. Owner Tim Puchta said the Puchta’s were frugal and used what they could from the property, as opposed to buying brick. He said the stones were probably much harder to handle, being much heavier than brick, so it was quite an architectural feat to build an arched cellar, considering the weight.

The seating in the Bistro cellar is made for conversation, with long polished stone bars and bar seating. Three chefs work in the adjoining small kitchen. Lee gives an idea of what diners can expect.

"It's kind of grand, because the chefs come out wearing their chef coats and all these plates come out at one time for each food course, paired for the wines," she says.

The Valentine’s Day first course is a shrimp ceviche cocktail prepared with fresh avocado, cucumber and onion in a cilantro lime marinade, paired with a dry Vignoles. The second course is a roasted butternut squash bisque with Granny Smith apples—a sweet and savory dish with hints of cinnamon and honey. It is paired with "Impulse," a delicate, light-bodied, semi-sweet wine made from cold-pressed grapes. The winery says cold-pressing the grapes allows for the retention of both the aromas and fruit characters that are amplified when served chilled. "It's crisp, and has well-balanced flavors of tart cherries, watermelon and passion fruit."

The entree is braised beef tenderloin filet, with mashed potatoes and green onions, toasted sourdough and Puchta's own 1855 Sherry and mushroom reduction sauce served with roasted Brussels sprouts. This is paired with a Cellar Select Norton and a 2011 Norton.

"At night, this space has really cool intimate lighting," says Lee. "All the Riedel glasses are lined up, everywhere and it's just [kind of magical]."

The Alpenhorn Gasthaus and Kitchen boasts an impressive 1860s wine cellar on the property. Operated as a guest house, proprietors Kate Schandl and Adrian Sigrist, husband and wife, opened Alpenhorn Gasthaus in August 2003. The home was built in 1854 and the farm operated as a brickyard and winery, hence the need for a large wine cellar under the house. Typically, dinner is served within the intimate dining room and the cellar is used for dessert and wine and port pairings. Adrian and Chef Kate are still putting the finishing touches on the Valentine’s Day menu. He says they will start serving hor devours—herb and cheese mushroom caps or bacon-wrapped, cheese stuffed jalapeno peppers with an elderberry glaze, followed by an organic salad of white and red pears, dusted with cinnamon and terragon, topped with goat and blue cheese and candied nuts. Fresh baked bread and pistachio butter is served, followed by the entee—surf and turf—shrimp and beef tenderloin with mashed potatoes drizzled with wasabi aioli. Rounding out the dinner is a roasted vegetable medley. Wine flights and pairings are available to diners.

Dessert is served in the brick and limestone wine cellar, which may be a tiramisu. "We've changed it up a bit, using a raspberry or strawberry liqueur in place of using espresso coffee [in the recipe]. "We will have a coffee station in the cellar and our wine list and port is also available."

The cellar itself will be candle-lit with mood music, providing a relaxing ambiance for Valentine’s Day couples and weekend diners, alike.

"It's nice and dry, candle-lit and romantic," says Adrian. "Diners come in here and they don't know what to say—it's quite a nice surprise for them that something like this exists."