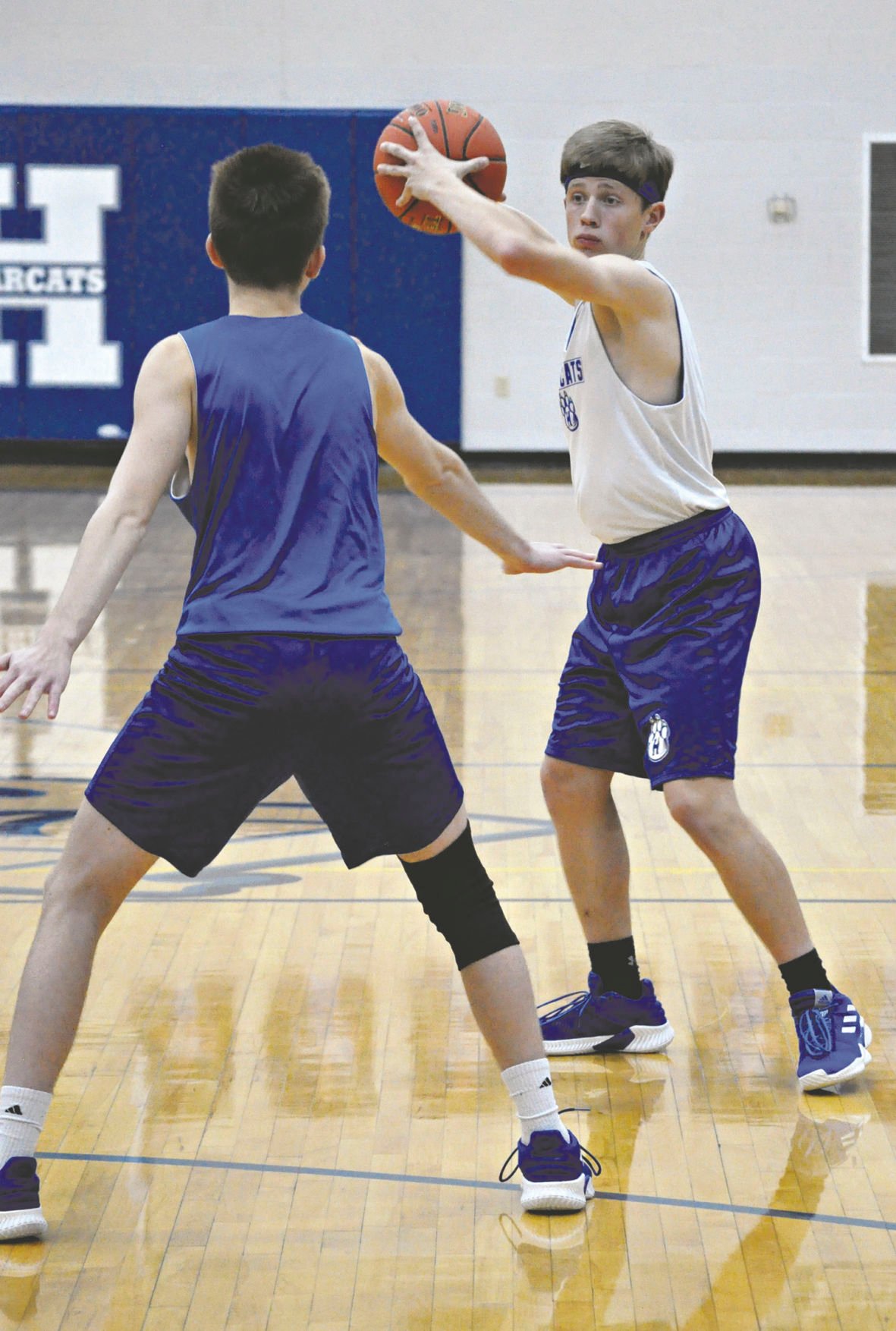 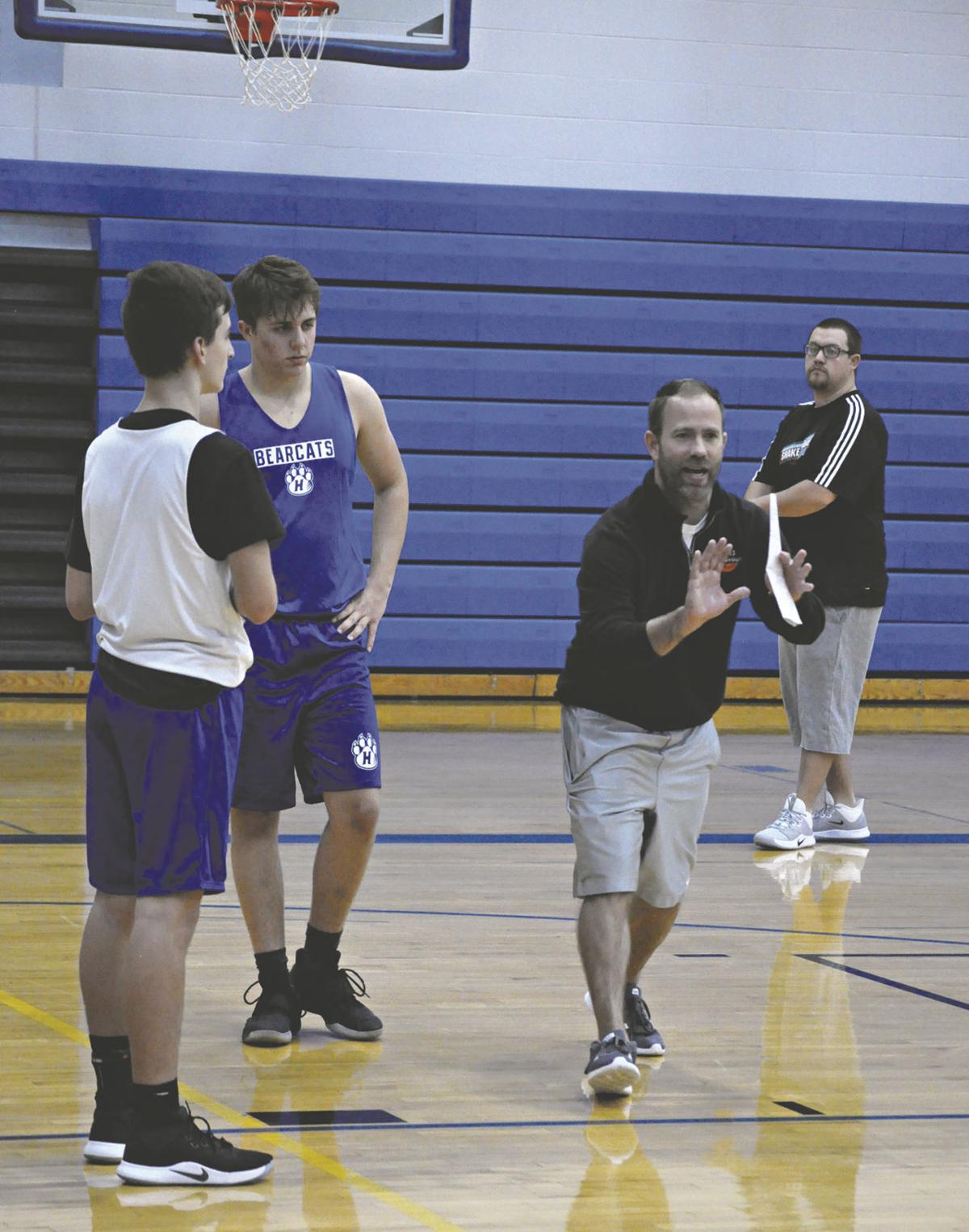 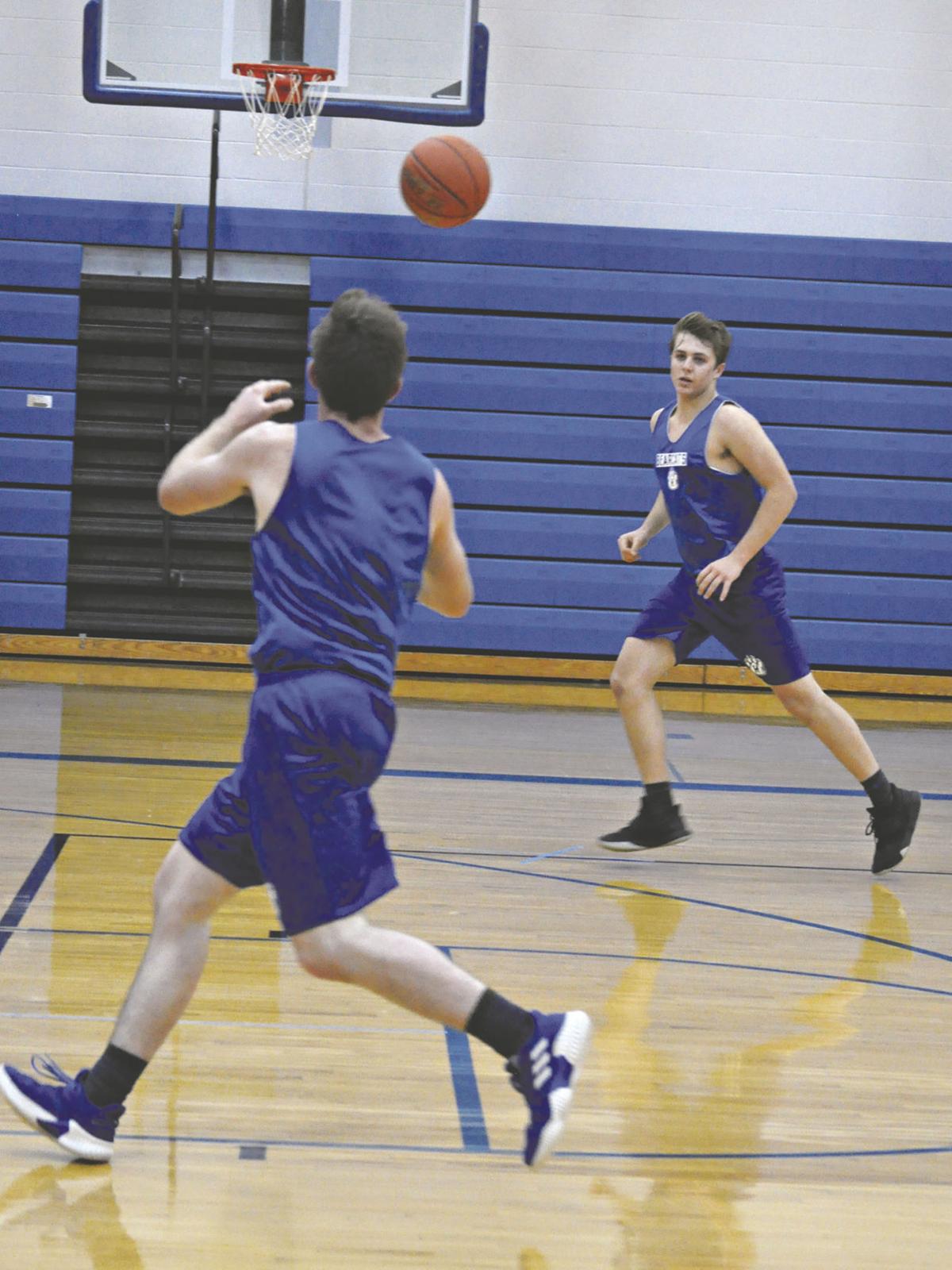 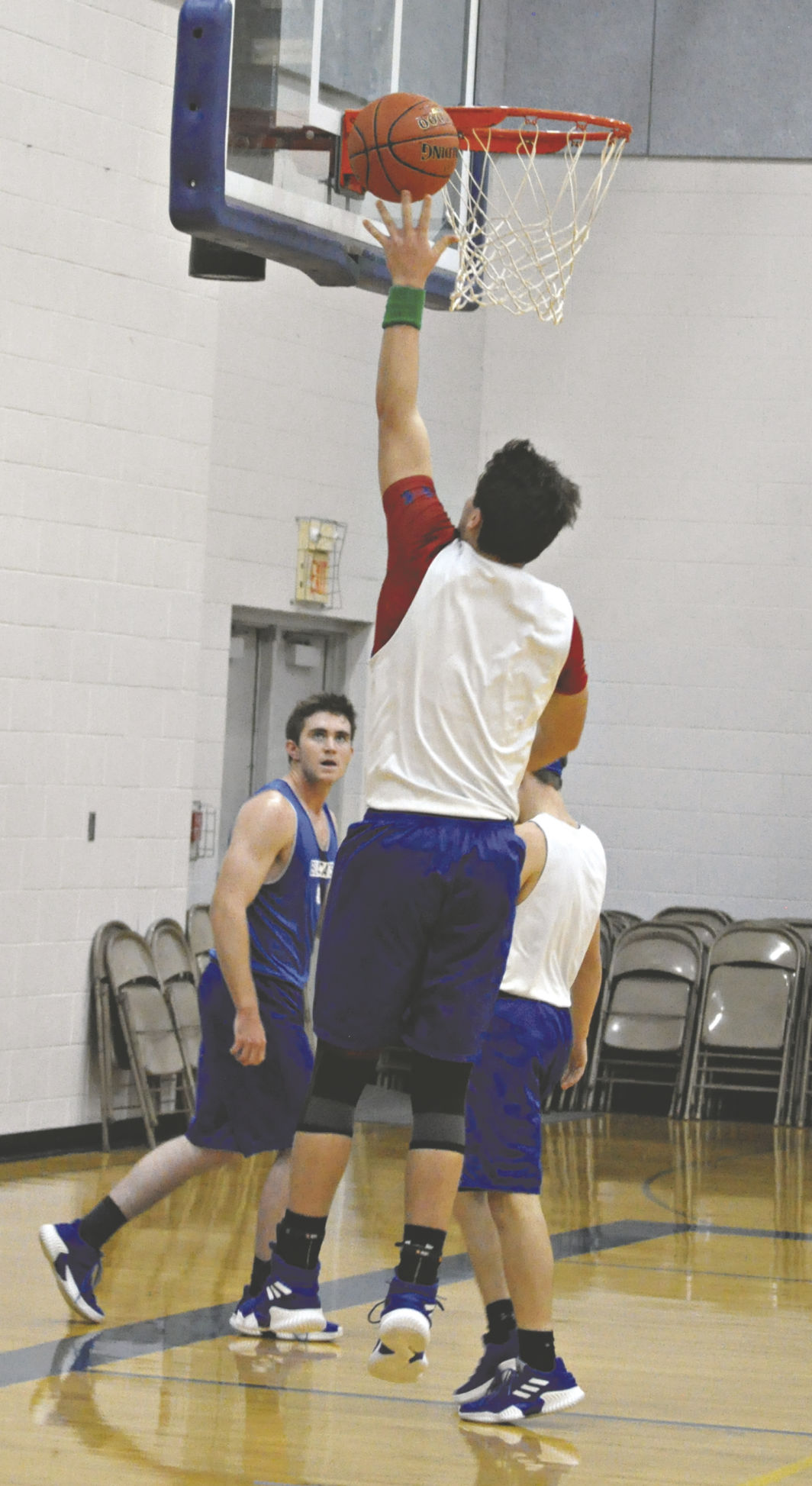 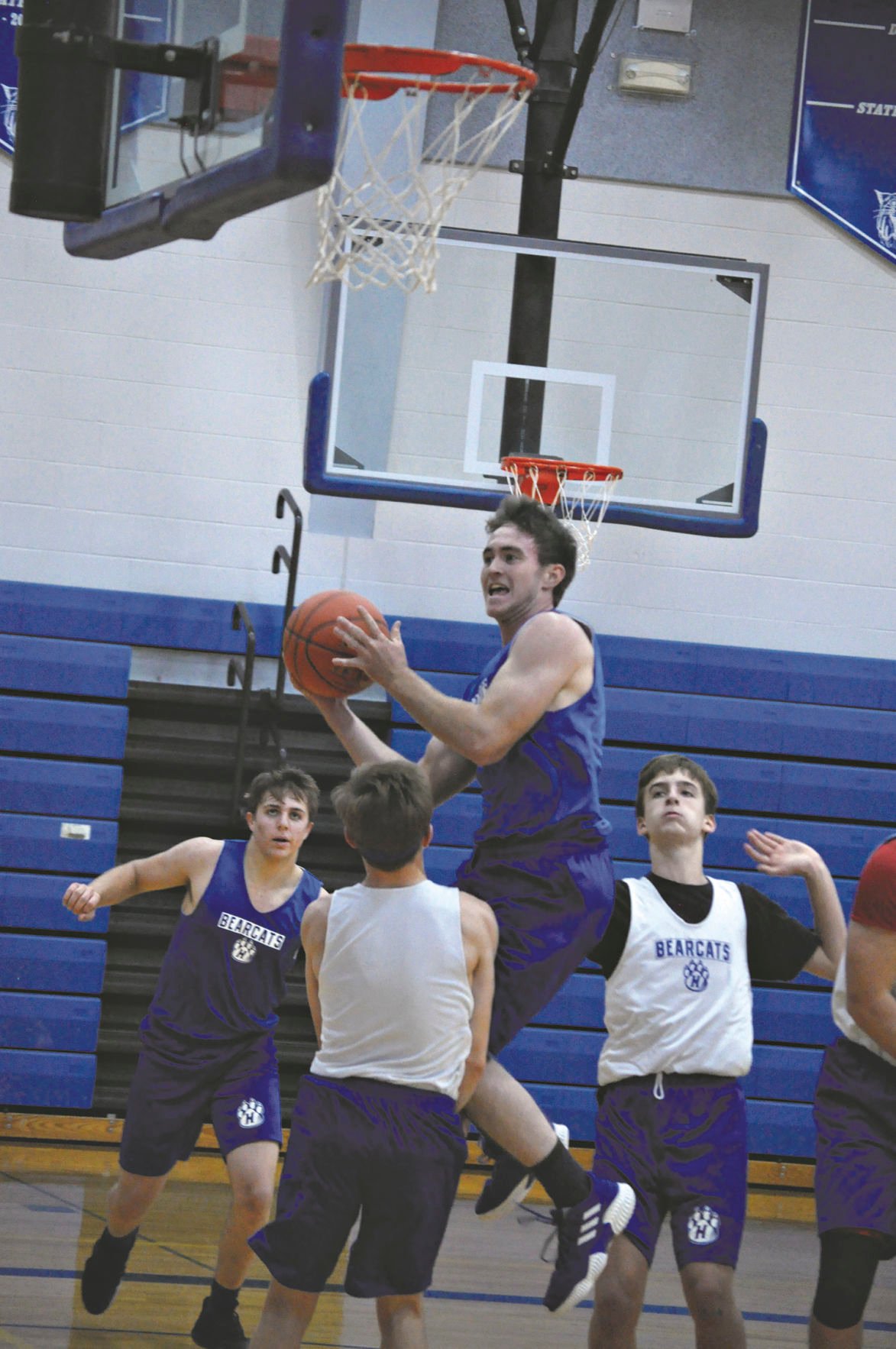 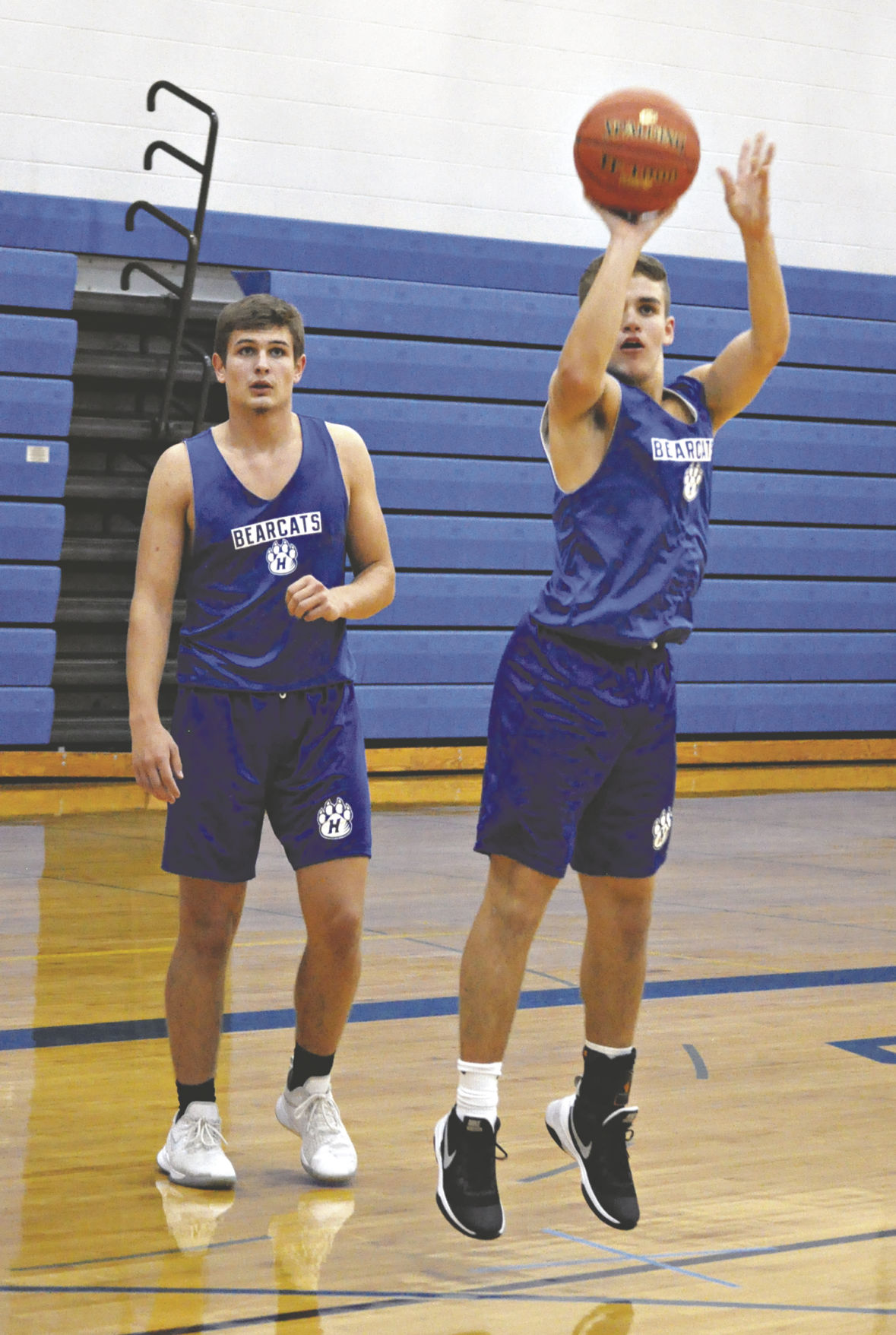 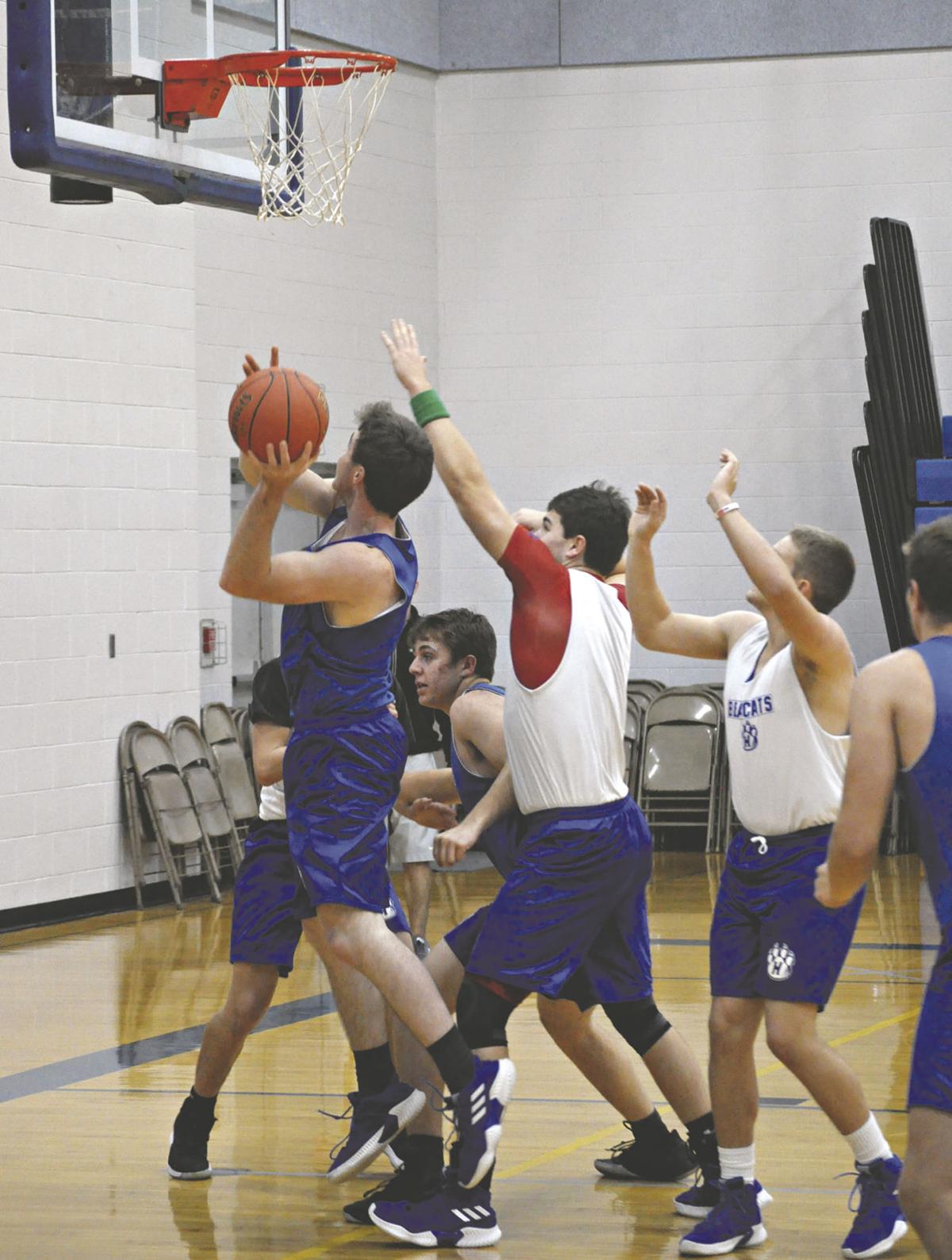 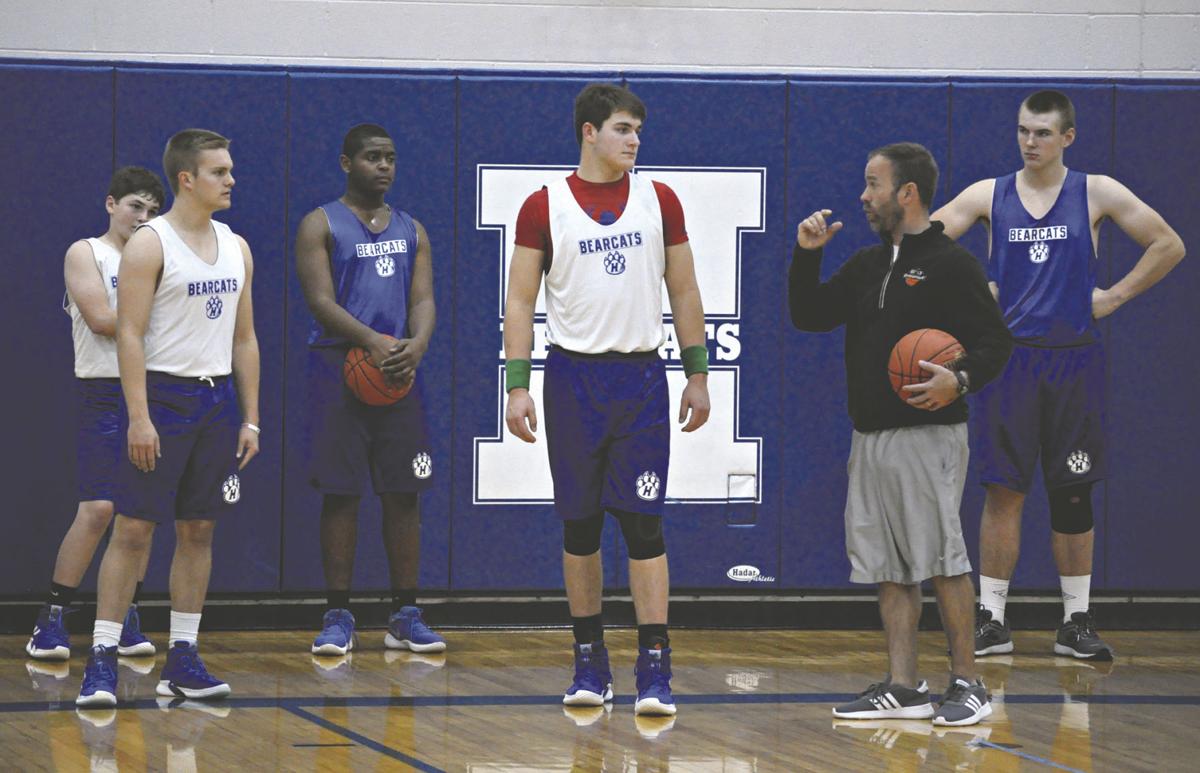 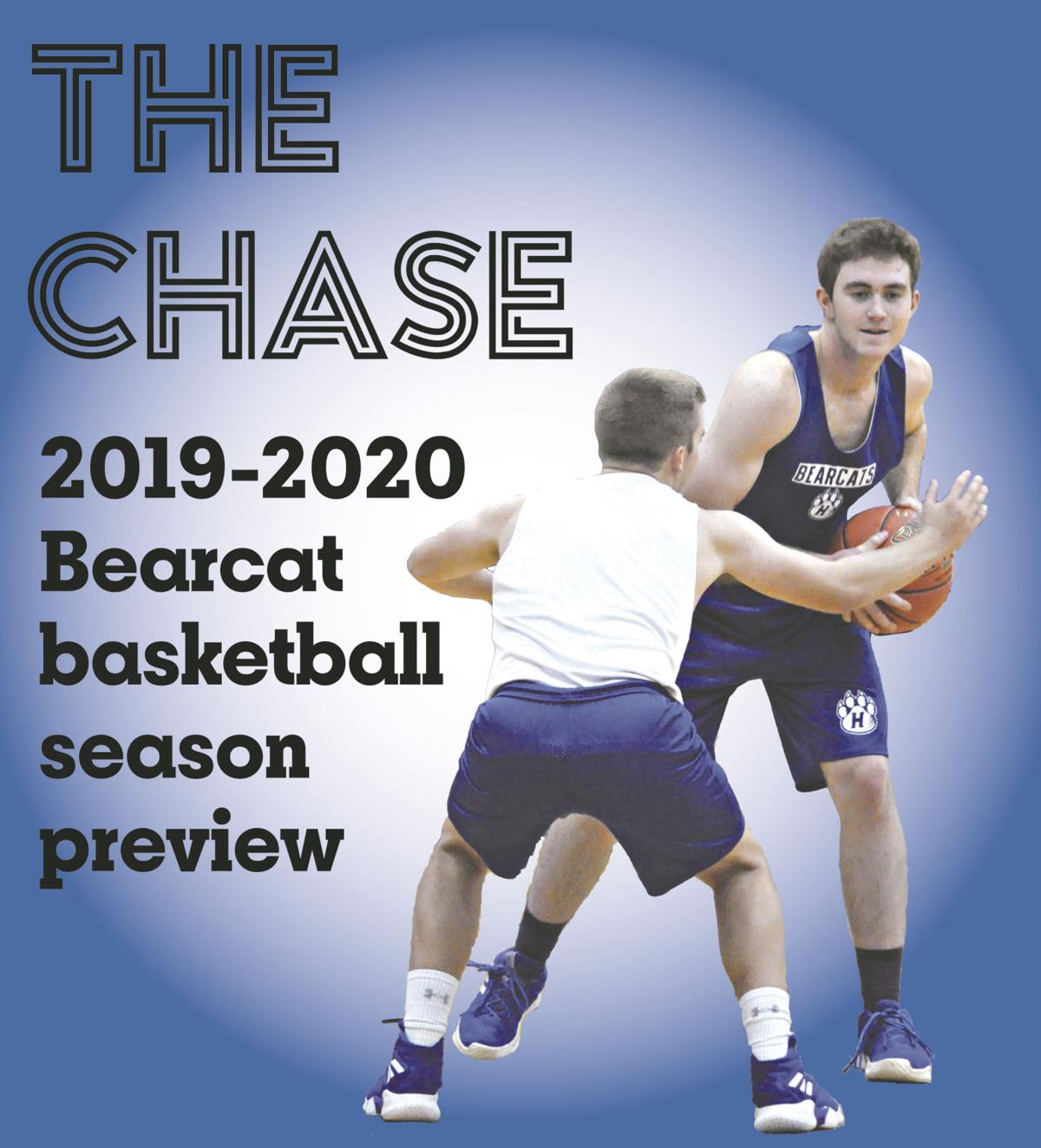 With six of the ten players from last year’s Hermann High School Bearcat varsity basketball team returning, this should be another exciting season, says Head Coach Josh Vinyard. Class 3 All-Conference, All-District Team forward, Trent Anderson, who averaged 17 points a game, scoring 493 points in 29 games will be the centerpiece under the basket again this year. He will be joined by an experienced nucleus, made up of senior guard Carter Hemeyer, senior guard Chase McKague, senior forward Boyd Phillips and junior guard Holden Ash.

Sophomore Seth Hackmann (6’3”) will see a lot of play this year according to Coach Vinyard.

“He’s played really hard and made big improvements,” he said. He put a ton of work in last spring—he can jump—just a really good athlete. We’re still figuring out where he’ll fall into place, so we’re hoping he continues to make progress.”

Schuler Erickson is another sophomore that should see a lot of play this year.

Both Erickson and Hackmann played varsity football which is a big plus according to Coach Vinyard, from a confidence and a team sport emotional/situational standpoint.

He likes having some height to compete against other teams with tall players.

We did the run and jump [defense] last year and we gradually got better at that over the course of the year,” he explained. “It was a good change for us, so we’ll continue to do that.”

He says getting the run and jump defense down is a process. This is a full-court man-to-man press that was first created by Dean Smith at North Carolina during the 1970s. The defense creates an up-tempo pace to the game and is effective because it forces guards out of their comfort zones with high amounts of ball pressure and then uses switching and blind-side traps to create turnovers.

"Our guards are pretty fast and we got better running it every game we played this summer," he said. "I feel confident [with this group of players] we can pull this off. We're at the point now, that this is what we do."

He says he won't adapt the defensive game to accommodate the team—it's the team that will need to adapt to run and jump to make it effective.

Offensively, the roles the players will be playing is still being defined, such as who will get to shoot outside shots.

Besides going into the season with some height and experience with the run and jump defense, the team has other strengths.

"Trent's a strength—he'll be able to score around the basket and he's consistent," explained the coach. "We'll have to do a better job of keeping him out of foul trouble. He'll get three fouls a game, just the way he plays. Our ability to go on offensive rebound, if we miss shots, should be really good—we did that well last year with Chet (Moeckli) and Andy (Schannuth). We got a ton of shots that really helped us."

He thinks Hackmann and Phillips will be really good on the boards in this respect.

"We're expecting huge things out of Boyd," he said. "He had a limited role for us last year off the bench, but he has put in a ton of time, getting 150-200 shots a day in the gym last spring, came in during the summer and three days a week in the fall. He's just flat making baskets right now.

He says Boyd is a role model for the younger players, showing them that with practice, come rewards.

"He didn't get better by sleeping in," he said.

Chase McKague and Carter Hemeyer have played four years on the Bearcat team.

Free Agency 2020: Position-by-position look ahead of what could be an NFL offseason for the ages

"They know our expectations and I'm really pleased with our seniors at the level we have practiced," the coach added. "They're disciplined, they talk, and they're positive with their teammates. We need good senior leaders and guys that will follow them—we've got that. I'm excited about those guys."

He says Holden Ash will move over to the point-guard spot to make their offense gel this year. According to the coach, he handles the pressure and the ball well, so he will be the "floor general," directing the offense, making sure his teammates are in the right place at the right time.

"It's the most important spot in high school basketball," he said.

A driving theme behind the team this year is what Coach Vinyard calls "The Chase." He says he borrowed it from Ohio State.

It's a long season before the Bearcats engage in District play, but Coach Vinyard is already looking forward. He knows that through regular season conference games leading up to the District playoffs, he will need to prepare his team for the level of play they met last year in Sectionals against Trinity, one of the best teams in the State last year.

Coach Vinyard says their goal is to win district again this year (last year's title was the first since 2010), which is the same district as last year, plus North Callaway. He says in conference play, St. James will be tough with lots of speed.

"Capital City (new to the schedule this year) will be one of those teams that play at a high level," he added.

"Our seniors laid the foundation for us to have a championship level program. It is something that we can reference to in the future, which means that their legacy will hopefully last well beyond the four years they wore our Bearcat uniform."

He says that while the outcome of this season will ultimately be up to the team, "we're [already] headed in the right direction."

Helping Coach Vinyard this year is Assistant Basketball Coach Jake Witthaus, who starred as a Hermann Bearcat roundballer, ranking third in top-ten career scoring with 1,304 points. Witthaus also holds the school record for number of three-pointers in a single season with 85, back in 2009, among other accolades.

Hermann Bearcat basketball fans will get the chance to see last year's legacy baked into the 2019-2020 Bearcat team in the Hermann High School gym on Tuesday, Nov. 26, against the Wright City Wildcats. Hermann beat them twice in two matchups last year 68-38 and 48-46. The junior varsity plays first, starting at 6 p.m. 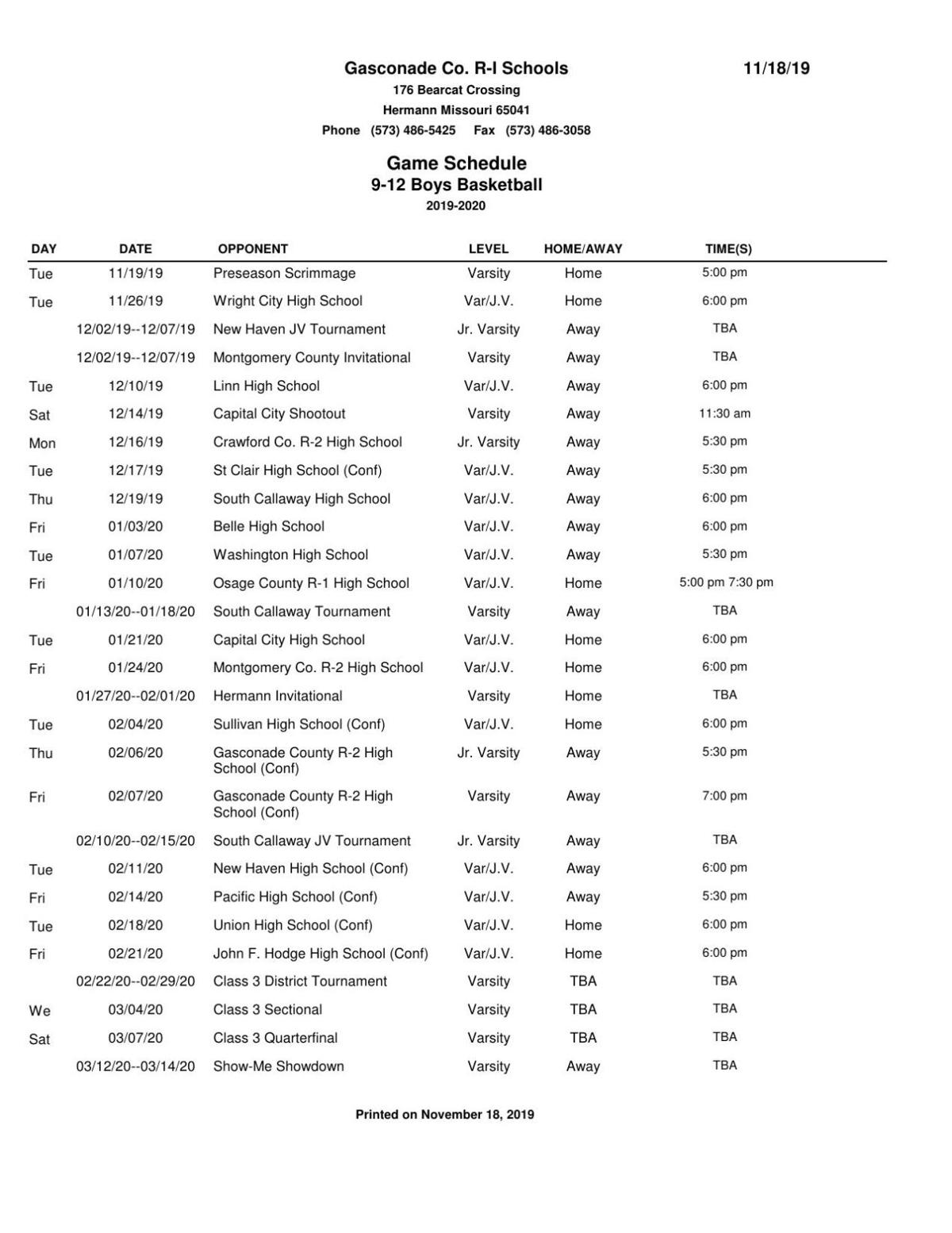 Next week: A preview of the Bearcat girl’s basketball program