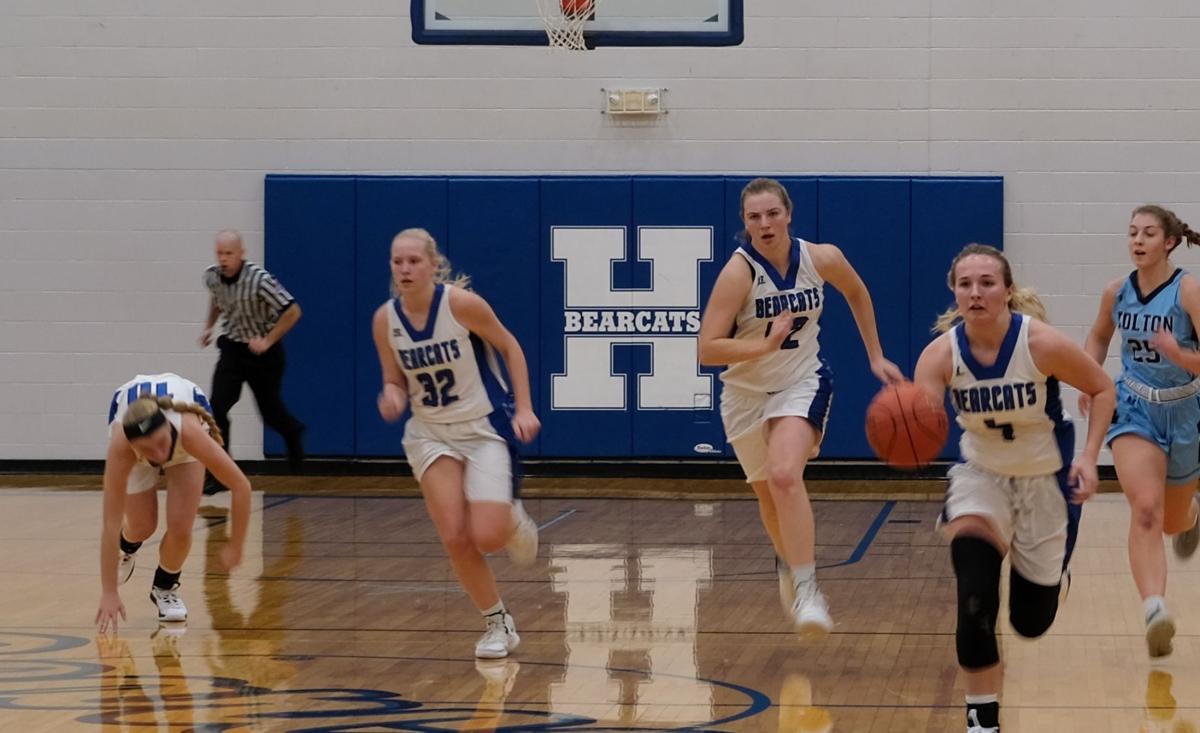 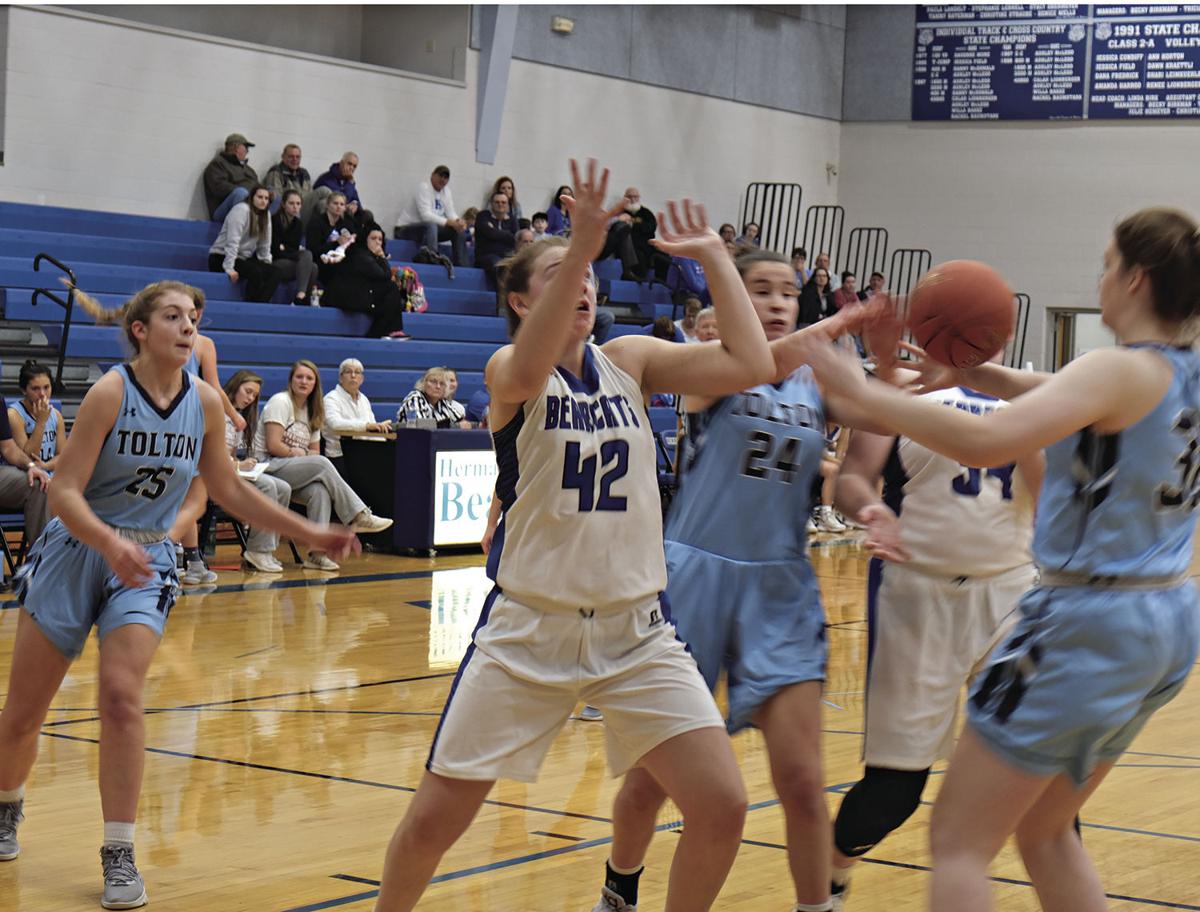 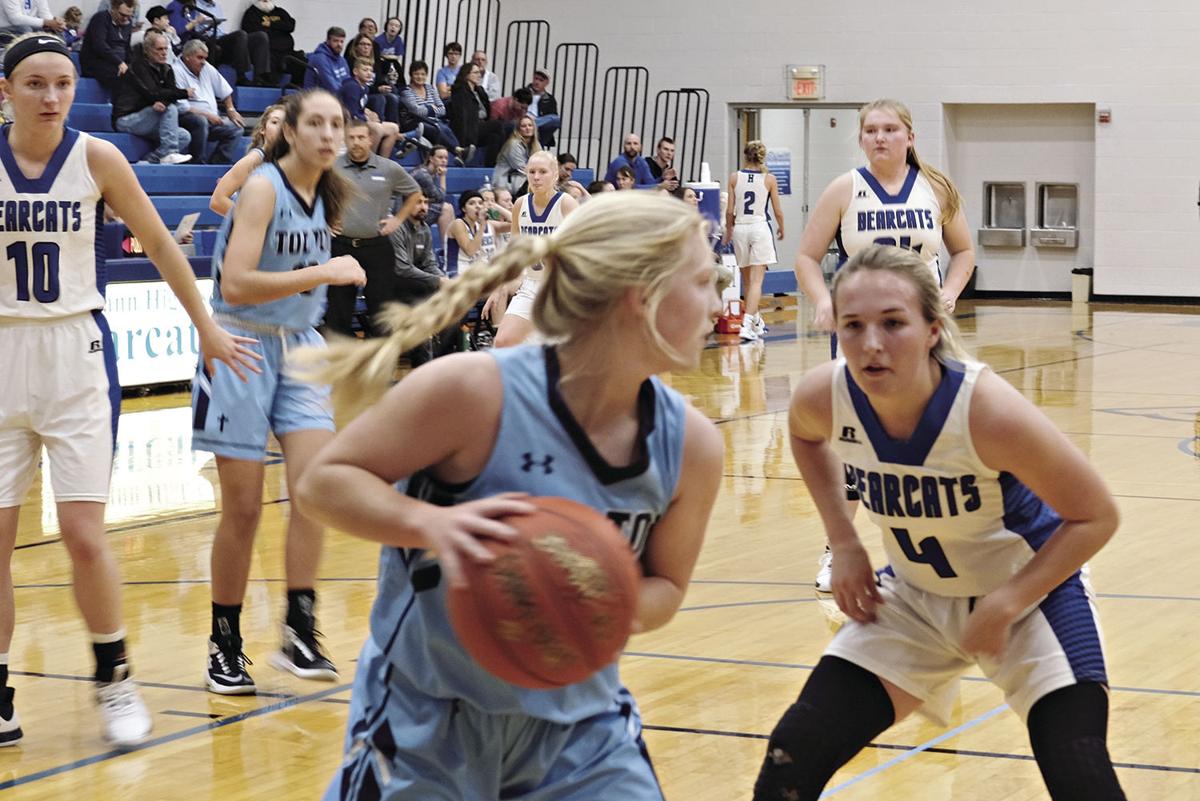 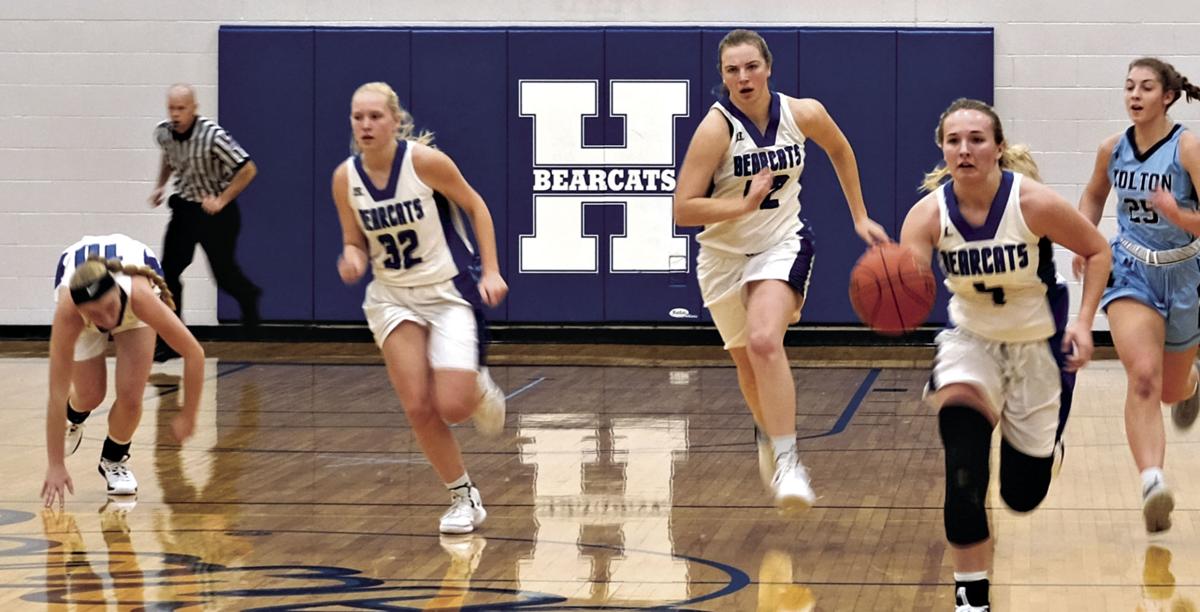 It’s a new girl’s basketball season and Head Coach Andy Emmons with Assistant Coach Jess Robb are hoping for a halo effect from last year’s Class 3 Section 8 District Title win over Lutheran St. Charles in OT. It was the Bearcats first sectional title since 2014 when they finished third in Class 3. Will they do anything different this year?

“Every year is new—we’ve got some different plays and new sets that we want to run,” said Coach Emmons. “We’ll still be primarily a man-to-man defensive team with the possibility of running some zone [defense] depending on  the matchup. It’s going to start with defense.”

Coach Emmons said he told his girls, “I’m not worried what you bring to the offensive end—you’ll get playing time if you play defense, rebound and communicate.” “We have to do that consistently.”

There are lots of aspects to winning a basketball game, such as hitting free throws. Coach Emmons says you have to break it down, so he’s chosen to work on the fundamentals such as ball handling, shooting and attacking the rim offensively. On defense, they’ve been working on the defensive stance, block outs, positioning for man-to-man principals and communication.

Allison Stiers and Quincy Erickson provided team leadership last year and Coach Emmons says he’s got some great leadership this year from the senior class in general. Quincy Erickson is back this year, but Brianna Thomas, Elly Krueger and Meghan Schneider will also be providing spirit and direction to keep the team moving forward.

“From our juniors, Hannah Gross is a good leader, as well as Grace Winkelmann,” he said. “Maya Widemann and Macie Witthaus are good communicators as well. The ability of your players to communicate is crucial to your success.”

Coach Emmons has not chosen his starters yet. He says they will want to try to play a lot of players, but again, it will depend on how well they are playing defense and communicating. Defense may be the focus, but it’s getting the ball down the court to attack the rim that excites the fans.

“We’re going to continue to push the ball,” says Coach Emmons. I don’t know that we’ll be as fast as last year, but you’re only as fast as you can handle the ball.”

He says the Bearcats be more of a half-court team this year.

He says Hermann will be able to get five, almost six-foot girls on the court to slow the other team down, if they like to press, or they can get speed on the floor to push the game tempo to get up and down the court quickly, depending on the opponent’s dynamics.

The three-point shot came to high school basketball in the late 1980s. Fans can expect to see Hannah Grosse and Briana Thomas shooting outside this year, but who can forget the 3-pointer hit by Quincy Erickson just before the buzzer in the District Title game over Lutheran St. Charles last year?

“We want every girl that steps on the floor to be able to knock down a perimeter shot,” said the coach. “If they’re open, I have confidence that every single one of them can knock it down.”

It’s a big advantage to be able to do that, besides the obvious point jump a team gets making a three-pointer, because it’s not easy to guard a team that has outside shooters, according to the coach.

Sophomores are important for team success

Red Zone podcast: How the Badgers will fare in the NFL draft and how the hoops team hitting the homestretch

Smaller schools like Hermann rely on their sophomores, and even freshmen, to help fill the bench. Coach Emmons made sure Grace Winkelmann, who was a sophomore last year, got plenty of playing time.

“I was confident we were going to need her last year to win the District Title and she had a huge game against Lutheran St. Charles.

He noted that without giving her varsity experience earlier in the season, she might not have had the game she played that night. She scored 13, hitting five of eight basket attempts (63 percent of her shots), was two for two on three-pointers and had four rebounds.

“Grace Godat and Malerie Schutt will probably get a lot of varsity playing time as sophomores this year and Holly Heldt as a freshman,” he said.

There are 24 girls on the team this year which should hold enough talent to be very competitive.

According to Coach Emmons, they will need to be prepared to face a tough South Callaway team this year. In the Four Rivers Conference he’s expecting St. Clair to be a hand full again, Co-Conference Champs Sullivan, Union and St. James are expected to be tough, as well.

“It’s just going to be who shows up and executes on that night,” he said.

Basketball is a long season, taking in the better part of three months from Dec. through February. How does Coach Emmons plan to keep the players from burning out and still win games?

He says they regulate their practices to ensure the kids get rest and make sure the players are having fun.

“Were going to do everything we can to win, be we just want to strive to get better every day.” “We’ve got a wide variety of leaders in this group that are willing to step up to improve and I think that’s great—they’re fun to coach and responsible kids, which makes life easy and we need to give them as many opportunities as we can to play and have success.”